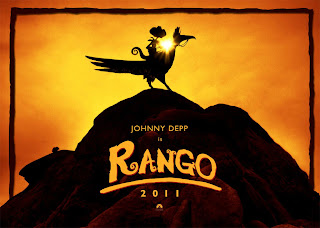 It's exciting to see family films be as daring as Rango. This is weird, but weird in all the right ways. Depp has turned in an amazing performance creating an absurd protagonist having an existential crisis as he moves through life without an identity. The entire film has a self-awareness that always comes off as clever rather than derivative. What really sets this apart is just how layered the film is. At face value a funny and beautiful looking flick about critters in a western town having a water crisis, underneath we have an examination of the hero as an archetype and a commentary on the ever fading image of the American cowboy.

I could spend a lot of time with this one, and who knows come oscar time maybe I'll revisit this but for now I will just touch upon a few scenes. First up is the opening scene. "Rango" is in his tank acting out a play with inanimate objects. I found the opening scene beautifully charming and wonderfully weird. His discussion with the tree about how undefined his character is was a nice foreshadow, as well as the inciting incident that sees all the water from his cage dry up. We get these simple foreshadows, that I haven't seen used as effectively as this in a family film.

I love the wise armadillo that sets off our hero on his adventure. Depps response of "so this is real town right not a metaphorical town" or his exclamations that "I am beginning to walk to the town...right now" are great examples of how self aware the film is.

Once we get to the town and Rango stumbles into the role of a lawman the movie begins its main adventure. The design of the town and its inhabitants is nothing short of spectacular. From the texture of the buildings, to the porcupine with water bottles on his back, to the hill billies in the caves, everything looks amazing and adds such depth and feel to the movie.

Like any good modern western, the theme of the disappearing west is constant throughout. We even have Lotso Huggin Bear in another villainous turn as a mayor ready to take his town into the future by giving in to industrialization. And then the man with no name shows up complete with oscars falling out of his golf kart to give Rango some advice. Truly brilliant, and more proof that if anyone is going to save the western it's Olyphant.

I really enjoyed this film. Rango is such an insane character that I couldn't help but love every minute of his screen time. He is so desperate to be a hero, to have stories of his own to tell rather than the imaginary stories he drops throughout the film. Is it better than Pixar? No, but it is way better than Cars, and who knows with time maybe it'll get up there. I've seen this a few times now and keep seeing just how much detail Verbinski has put into this film. Another one that I know Riley will love when he gets a bit older. Oh yah and be careful of the owls, like any narrator I'm not sure you can trust them.

One last thought - the use of music throughout was just as self referential as the story....often times moving from music the characters couldn't hear...only to pull out and we discover a character within the film is playing it....like those owls up there...most of the movie they are narrators then all of a sudden they are part of the action.