You'd be better off calling the Ghostbusters love: Attack The Block 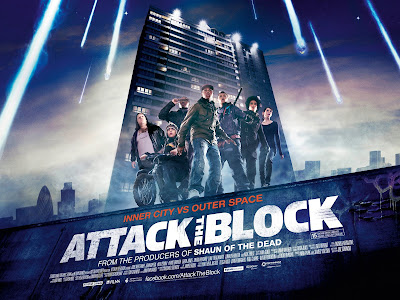 It seems that the English are good at several things such as defending against a sea invasion by a Spanish armada, utilizing the English language correctly and of course they make some killer fish and chips. Honestly, I could go on and on but we all have lives to live. Anyway, one thing not mentioned is their television and film industries are good and the entries that make it stateside tend to reflect this. Add Attack the Block to the list. 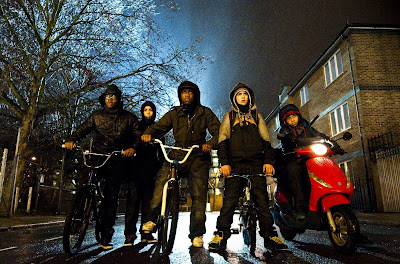 Attack The Block is an science-fiction action comedy that follows some urban youths who reside in the equivalent of low-income housing that they call "The Block." Led by Moses (John Boyega), this group of toughs get caught into an extraterrestrial situation while robbing (Sam) (Jodie Whittaker). After brutally beating the alien creature to death, the Block is attacked by other aliens with no eyes and glowing fangs. Now, it is a kill or be killed situation for Moses and his crew.

I was intrigued by the prospect of this film that was written and directed by Edgar Wright's protege, Joe Cornish and has Nick Frost in a decent sized role as a drug dealer named Ron. So, while in New York, Bence suggested we check it out and I said "you got it buddy" with a finger up. Needless to say, I was far from disappointed. For having a virtually nonexistent budget, the film had better special effects than a movie with greater resources. 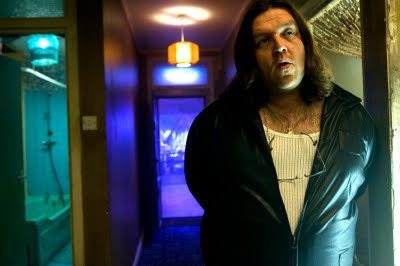 The quality parade does not end with the special effects. The script (in terms of dialogue), acting, soundtrack and editing were exceptional. Moreover, they were able to shine in spite of a seemingly homeless (but altogether insane) yelling at the screen with an accent which might have been real or fake (regardless, it sounded like it was part of the film).

Upon reflection, I really enjoyed this film. It put movies released this summer with mind-boggling budgets to shame. Furthermore, it's examination of working class youth's psyche in England. It was refreshing to see characters like this as intelligent and run counter to the cliches that could have taken shape with a lesser script. Before I leave you, I must comment on how the film's dialogue was amazing and did not sound faked, forced or lame. Trust.
Posted by Manfred "Manny" Funkowitz at 3:41 AM