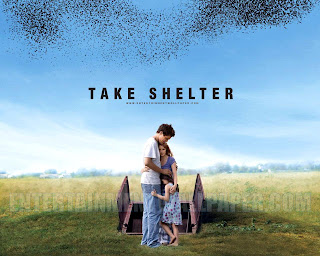 I don't think there has ever been a time of such cinematic overload as these past few weeks. Whether its catching up on the weekly releases in blu, or research for a future movie night, or heading to the theater, my life currently is family, work(real job not this job) and film. I don't know if I would ever want it any other way.

Today is all about the end of the world. I am on my way to go see Melancholia at the NYFF, and I figured I should write up my thoughts on Take Shelter from Jeff Nichols. Take Shelter stars Michael Shannon as Curtis, a good man who has a family history of mental illness. He begins having dreams and hallucinations of a massive storm that seems to bring about the destruction of society. The film follows him as he uncontrollably attempts to build an old tornado shelter to save his family, while at the same time trying to fight against his seemingly growing insanity. Jessica Chastain( who joins Gosling and Fassbender as hardest working actor/actress this year), plays his devoted wife, who struggles with her husbands erratic behavior and tries her hardest to stay with him through it all.

The big buzz about this movie deals with the ending, and Shannon's performance. Let's look at his performance for a minute. Shannon is such an intriguing actor, unafraid to make some off the wall choices. He steals every scene he's in, in Revolutionary Road. Here he graduates to leading man, this is his movie from beginning to end. He turns a subtle performance that is just miraculous to watch as he deals with his growing insanity. You see the pain in his eyes as he makes decisions he KNOWS are crazy, but is seemingly incapable of doing the logical thing. He has his moment of public breakdown and the energy he brings, far outshines Knightley's feats of pure crazy at the beginning of A Dangerous Method. He deserves to be nominated, whether he will or not is only going to be decided by the movies esoteric nature. 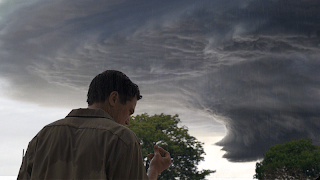 The dream sequences are expertly crafted moments of tension, utilizing the slightest bit of cgi to create ominous clouds or peculiar birds. These sequences are placed right in the movie without pretext so we are constantly in Shannon's mindset until something crazy happens and we realize it's a dream. They are jarring experiences which help us identify with the stress Shannon is feeling. My favorite was the short zero gravity effect.

Nichols seems to care a lot about the American family. Where so many films are about the disentegration and deceit within family, this film shows just how strong a family unit can be. As frustrated and upset Chastain gets, she never gives up on her husband. She never becomes an enabler either, she stands as his support pushing him to combat his illness and prove to himself that he can over come this sickness. Even Shannon, is brought to tears when he realizes just how close he is to losing his wife and daughter.

Nichols has crafted a solid first film, with an intriguing sci fi thread stringing the film along. He has pulled an Oscar worthy performance out of Shannon, and shown that story will always be superior to effects. At the climax of the film we are left with one of the most depressing "happy" endings in recent memory. I, of course, will not ruin it here. Nichols is one to watch and that's the best praise I can give this film.

One last thought - Chastain is really carving a niche out for herself as a wonderfully subtle actress. Her work here is reminiscent of her turn in Tree of Life, both characters wore a lifetime of emotions across their face, and both were entirely devoted to their husbands and both still so different