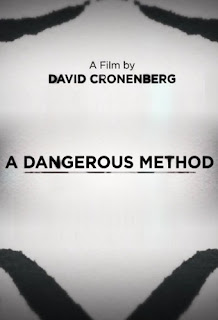 Just finished my second round of films at the New York Film Festival and after working a full day at the real job then doing a double header, I am tired and incredibly excited. This really has been one of the most amazing experiences of my film going life. You can read my first piece here which was the wonderful Miss Bala by Gerardo Naranjo. Tonight I will look at Cronenberg's latest A Dangerous Method, and tomorrow I will be back with thoughts on Kaurismaki's Le Havre.

A Dangerous Method is unlike anything I've seen from Cronenberg. Each of these films begins with one of the heads of the Lincoln Center Film Society introducing the film. This time, he discussed his affinity for such Cronenberg classics as The Brood, and Dead Ringers and his car crash sexual exploration flick Crash. After which David Cronenberg himself came out(frakking awesome moment) and proceeded to say thanks for the introduction "but you won't see anything from those films just mentioned" Boy was he right. This is even different from the adult crime dramas he's been working on with Viggo lately. This is a talky, sophisticated journey through the beginnings of psychoanalysis. We follow Jung as he begins to practice the teachings of Freud to great success at first, but as time goes on the inescapability of Freuds theories invades Jung's life and Jung's own desire to explore dreams and higher meaning create a fissure between Freud and Jung. The catalyst to all of this is a young mental patient who is seemingly cured through psycho analysis, and ends up going to med school herself, only to become intertwined with both doctors.

The end result is a film that I feel will divide many. It is very dialogue heavy, and in place of the brutal and raw action scenes in his past two films, Cronenberg has injected scenes of verbal and written sparring, wherein often times our two doctors show just how powerful and destructive the pen can be. Many will take this a slow moving period piece just as obsessed with sex as Freud is. A shame, considering just how deep you can dive into this film. 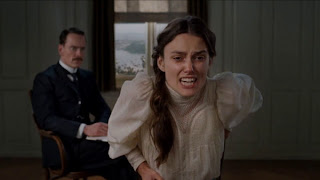 I want to talk briefly about the performances. First off Keira is by far the weakest link. The first act in which she goes full crazy before Jung can "cure" her, was a bit over the top for me. After that in which her character levels out, she fares much better. I still felt she struggled the most going toe to toe with Fassbender and Mortensen, but we'll get to that. I will give Knightley this, she gives a very risky performance, and commits to the masochism and perverse sexual nature pf her character and that's something to be commended. Now when it comes to Fassbender and Mortensen, these two explode on the screen. The moment they meet is a time of cinematic bliss. They both play off of each other so well, and much like them, their first time meeting flew by(although according to Freud lasted 12 hours.) Fassbender brings a subtle restrained performance that really comes alive with the supporting cast. His subtle variations show how each character effects hims, whether its his repressed desires beginning to surface, or his longing and frustration for a strong working relation with Freud, or even dealing with his own insecurities upon meeting Vincent Cassel. Cassel is always great, and here is no exception. Wonderful supporting turn in the carefree super intelligient lets indulge all of our passions that its a shame the academy wont recognize him. 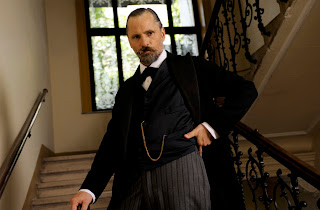 Mortensen does a role unlike any I've ever seen. His Freud is shrewd and manipulative. He is stubborn in his ways and refuses to listen to anyone else. His gentlemanly sophisticated verbal jabs at Jung are incredibly powerful, and I could've watched a whole movie of just the two of them walking through the garden or hanging out in Freud's office.

The film in tone and pace, is so far different than anything Cronenberg has done that many will write it off. But upon closer look, he has made a film that dives into the origins of the very themes he's always been passionate about. Cronenberg loves Duality, whether its identity, or blending realities, or fiction and non fiction, or good and evil etc etc, Cronenberg always plays with duality(Scanners and Dead Ringers offer up some great examples). Here we see two figures on seemingly level playing fields with a different set of ideals attempting to come together. In the middle we see how their actions can support either one of these mindsets, and ultimately come out the other end on polar opposites. The movie is a journey through the mind and how we think set in the real world. There is no huge metaphorical talking typewriter, or man eating centipede. Here we have real peopl dealing with their neuroses. People come in and out of their lives and we see the influence that people have on ones identity. Fassbender again does such a fantasic job at showing subtle changes during the scenes in which he's with different characters. 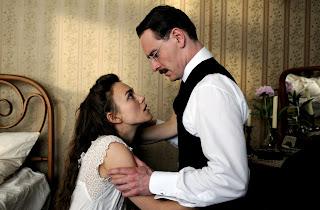 Don't worry Cronenberg is still obsessed with sex. One could argue that the whole movie is trying to prove that everything is not about sex, while having our characters constantly make decisions from a sexual point of view. This tug of war is exciting to watch as Cronenberg for the first time approaches sex head on. It would be awkward if it was not a little perverse, we have spanking and masochism, but there are no phallic mugwumps or car crashes. Sex begins to permeate every decision in these characters' lives forcing Jung to consider the absolute of Freud's theory. He brings duality again in the guise of Jung's wife and Keira's Sabine. The scene that really brings this to light is the word recognition scene, in which Keira is scene in the back playing with a weight balance(obvious metaphor here) while Jung's wife answers questions. Upon her leaving, Keira takes the place of the wife reluctantly assuming the exact position including hand placement. Jung is constantly shot from behind Sabine, which calls back one of their first meetings in which he tells her not to look at him. He keeps this sense of superiority even when they begin their affair. Often times she will be sitting while he is standing in the background. This is reversed once Freud enters. Freud is often seen leaning or standing while Jung is in the submissive role. Even when sitting Freud is always in the dominant position, whether the head of the table or the place behind a desk. This is Cronenberg using classical techniques of Mise en Scene and bringing his typical sexual overtones and dark behavior under the surface. 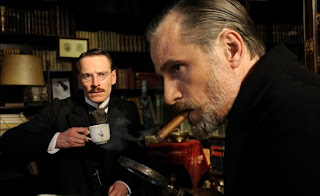 Even just writing this piece I get more excited about the film. This is definitely one that needs to be talked about, I guarantee revisiting this film will only yield different feelings and more observations. Whether it will age or diminish, I know something new will be discovered each time I watch it. I am going to wrap it up now, but I didnt even begin to describe the gorgeous cinematography or the impeccable set design. I loved Freud's office cluttered with trinkets and devices, while Jung's clinic was clean and cold. Wonderful movie and amazing screening being able to see Cronenberg in person joined by Fassbender. 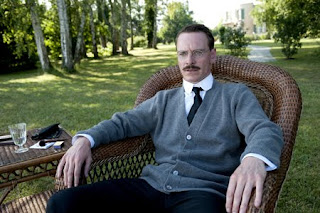 One last thought - I'll be back tomorrow with my thoughts on Le Havre, sorry I am just way too tired to finish.
Posted by Bence at 9:45 PM