What Do You Want to Listen to? I like Schubert... Well, I Don't!: Out of Sight

Film Foray RETROspective no. Cinq: Out of Sight 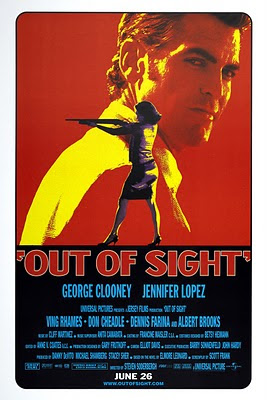 Out of Sight
There are few films that I would (literally) drop everything and watch if it being shown on television (Since I am far too lazy to place my DVD in to my player to watch it). Out of Sight is one of those films and yesterday was one of those instances. Out of Sight is one of those films that never gets the recognition that it rightly deserves. Many people slag it off because of the presence of Jennifer Lopez in it, but it is about as good as any other Soderbergh film... Maybe more (Subjectively speaking). 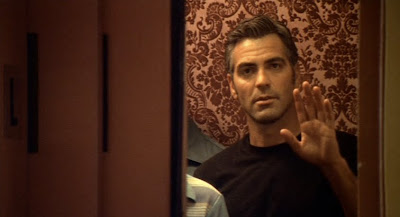 The film follows Jack Foley (George Clooney), a bank robber currently residing in a federal penitentiary, who enlists his friend, Buddy (Ving Rhames) to bust him out. The ultimate goal is to rob the home of a wealthy felon of his uncut diamonds. Unfortunately, Glenn (Steve Zahn) has told psychotic boxer, Maurice "Snoopy" Miller (Don Cheadle) who has decided to hijack the job and obtain the diamonds himself. All the while US marshal, Karen Sisco (Jennifer Lopez) is right behind Jack and Buddy, determined to send both to prison.

What makes Out of Sight a great film is the combination of a wonderful screenplay and a cast that fits perfectly within it's roles. In terms of the screenplay, it is quite aware of itself... Not in a pretentious Quentin Tarantino way but it references things before they happen. Whether it is Karen Sisco discusses how two characters came together too quickly (which is an allusion to Jack and Karen), Jack Foley's tendency to ramble when nervous or when White Boy Bob stumbles repeatedly makes his death real (in a sense) and not merely happenstance. 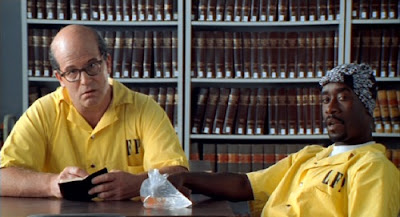 Ultimately, Out of Sight is an intelligent film with some great performances from everyone involved (yes, even Jenny from the block). Unfortunately, it gets forgotten behind some of Soderbergh's other films as The Limey, Traffic and of course, Ocean's Eleven. This is a shame considering the film fires on every cylinder (the soundtrack is amazing and it's use of Fight the Power makes me want to visit Detroit) and even the a cameo by Samuel L Jackson prior to credits makes the viewer wish that the film would continue. In short, this film comes recommended and has held up considerably well on multiple viewings (See first paragraph).
Posted by Manfred "Manny" Funkowitz at 12:25 PM