The Whole Economy is a Pyramid Scheme: Collapse 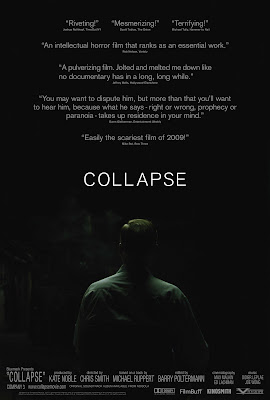 Collapse
This Cavalcade posts comes by way of a recommendation from a little over a year ago. I was told to watch this movie because the truths it contains were scary and human civilization is doomed. Thankfully, I had beaucoup hours to kill (roughly a week ago) as I stayed up for about forty-two out of forty-eight hours for a reason that is a tirade for another time. Anyway, I cued up this documentary, screened it and ultimately suffered through eighty-two minutes of frustration as it simply did not live up to the recommendation nor the subject matter... Of course, I am getting ahead of myself. Meet Michael Ruppert, former LAPD police officer, peak oil theorist and a person very proud of the fact that he has never been asked to testify before Congress. Oh, did I mention that Ruppert thinks that George W. Bush and Dick Cheney have made him their number one enemy? This film follows an interview of Ruppert's theories regarding energy consumption and the collapse of human civilization after exhausting all of the world's oil reserves. He makes some compelling points about energy consumption and politics that I knew when I was in my teens. Of course, civilization will take a step back from where it is currently if oil is exhausted... It only is an ingredient in EVERYTHING. How insightful.

The main issue that I have with this documentary is Michael Ruppert. What are his credentials besides being a crackpot? Like I said, better people who have done the research that he was citing and they are the individuals who should be discussing such topics as peak oil or the implications of a world without oil. Ruppert simply is an arrogant and altogether self-aggrandizing individual. Seriously, no believes that you "called" the financial meltdown in the United States... Especially since everyone could see it coming. Secondly, I highly doubt that Dick Cheney and George W. Bush read your blog (sorry chummy, I will not name drop it) and decided to make you a target. 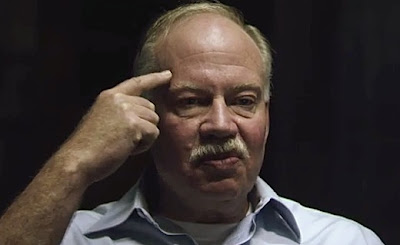 Chris Smith's documentary suffers because of Michael Ruppert and his lack of credibility. I cannot say if it was Ruppert's allegations or the fact he chain smokes through the entire documentary (which could not be good for his lungs considering the ventilation in the "bunker") and this is a shame. I mention that this is a shame as this film provides an excellent venue for discussing the subject matter. Michael Ruppert is correct, human beings will exhaust all of the world's oil and this will force a reevaluation of how we as a species will live (Co-ops, collective farming or Kibbutz's and the return to the urban environment... Adios, suburbs).

Critics state that this documentary is comparable to the works of Errol Morris and completely disagree. The Fog of War mastered this style of documentary film making and while Chris Smith makes use of the style (interspersing of Ruppert's account of peak oil with imagery and stock footage) of Errol Morris, he does not bring this documentary into the same arena as Morris. Since I have had well over a week to ponder this film (as it has been stuck in my craw), I came across an interview with Smith where he explains that the film is less about peak oil and more a character study about how obsession leads to the collapse of the individual. 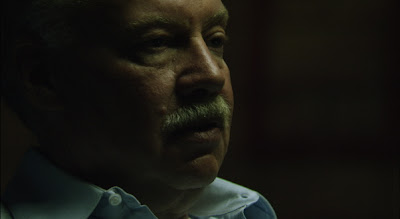 This puts the film into a different context especially if one considers the text prior to the credits, which states that Ruppert is being evicted from his house. Ruppert's paranoia has cost him almost everything and it is not the ideas that should be blamed (since he has some decent thoughts). Maybe it was the over the top weeping on camera or the pooping on all other forms of energy while offering no solution to the breaking the stranglehold of oil. Again, it was a thought-provoking film (and subject in general) but coming from a less than credible source killed the effectiveness of the message.

(Two generous Rooney's as it is not a good film but people might want to check out the subject elsewhere... Say, a book.)
Posted by Manfred "Manny" Funkowitz at 3:05 AM