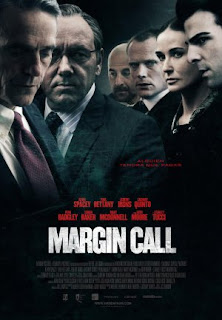 I remember hearing about Margin Call at Sundance, and hoping it could deliver on the promise of potential that everyone was buzzing about. I'm here to say the film delivers on all promises. This film from first time director J.C. Chandor has a great script backed up with some solid classical direction. He keeps his shots simple and tight. With each boardroom getting smaller and smaller as we realize just how grave the situation is. Featuring some
all star turns from Spacey and Bettany proving that underneath vampire killers an angel assassins he's a damn good actor. 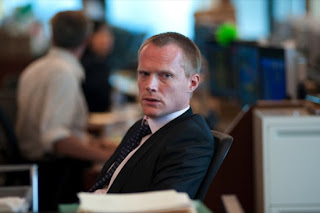 Stanley Tucci is the head of risk management for a major corporation. During a period of downsizing he gets let go, but before he leaves he passes off some work he was doing to Zachary Quinto. Quinto finishes the work and discovers the economic catastrophe that awaits them. The rest of the film moves at a breakneck pace as late night meetings are called in order to figure out how to cut their losses and ultimately unload billions of dollars of worthless stock which of cours will cause a ripple effect with which we have all seen the results of. 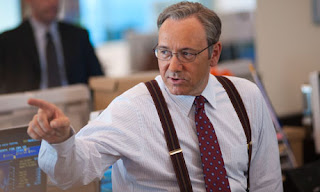 Spacey is Oscar worthy here as the head of sales who happens to have a conscience and fights desperately against having his team sell shares that are worth less than zero. He has the character with the most inner conflict and their is a bit with his dog, which is a symbol of his soul here. His dog is dying and he is struggling to save his dog but without ruining too much(I'm sure you know what happens in the end) he fails and ultimately buries his soul. It's a restrained performance and his morning speech to his sales staff is riddled with such frustration underneath that it should be studied. If the film
garners any attention outside of the incredible script then I say it goes to Spacey as best supporting actor nominee.

Ah the script. The script is incredible creating realized characters out of some incredibly greedy an selfish people. Bettany finally chooses some material that shows off how good he really is. He plays a sort of voice of reason as his tirade towards the end puts the blame right back on the public for being stupid enough to think money could grow on trees. The script moves fast and is riddled with jargon all throughout but I can't imagine anyone who actually cares about the material having trouble keeping up. This
is powerful adult drama with some high stakes, but rather than robots and aliens, these repercussions are real. There is a constant obsession with money throughout the film. The way it plays is not really about greed but more of a modern day obsession with how much everyone makes. It is an interesting commentary on the socially connected lack of privacy we love in which profile pages, job status and dollar signs define who we are as people. 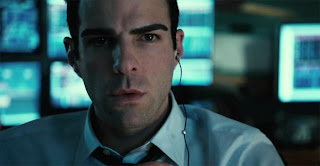 This is the sleeper hit of the year I you ask me. Thoroughly impressed at the restraint the director shows for his first time out. Rather than announce his arrival with a fast cutting over stylized slick piece of cinema(not there's anything wrong with that if done right) he gives us an amazing examination at one of the worst economic crises of our time and let's the script and actors home through some simple direction. This year has announced the arrival of some new talent to say the least. This and Take Shelter definitely go head to head for the best new director award so far.

One last thought - Jeremy Irons as the head of the company is amazing and of course Manny's man crush Stanley Tucci turns in solid work as well.
Posted by Bence at 8:16 PM