G-d Says "Quit I Saying That I Told You to Run for President." Trust me on this, He Told Me So. 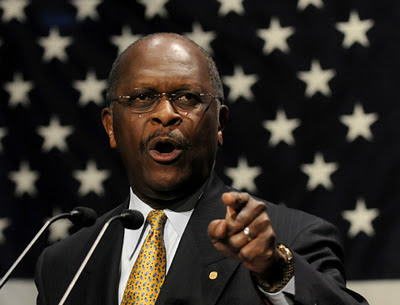 Talk about setting up your own insanity defense. This just in! Herman Cain shares a walkie-talkie with G-d. That or somebody stole page thirty-seven out of the Karl Rove Guide to Winning A Presidential Election in the Year, 2000. Luckily, for our Cain, Amazon has a slew of the remaindered copies at bargain prices! Anyway, let us return to the subject of Herman Cain being on the speed dial of the Almighty creator of the universe.
Now, like anyone, I am curious to the timing of Cain's announcement of G-d nudging him towards attaining the highest office in the land. I surprised though, considering that I know G-d is omnipotent and how he also did not suggest a campaign manager who would check closets for skeletons... At the very least, I know he would have urged you to hire a private investigator to --well-- investigate a person's background to insure no indiscretions would come to light. See, I do not think that the Almighty would back someone that he knew had such shenanigans in his private life. Ask my man Bill, things like that do not stay buried.
Seriously, I am not having a go, not at religion at least. There is nothing wrong with religion and I dispel any notion that I am a godless heathen here and now. However, I do not mix those beliefs with politics nor let them govern my decision making processes. Most of all, if people were making inquiries into my private life, I would not exclaim that "G-d persuaded me to run for president" or compare myself to Moses. Bold talk for a man with four allegations of sexual harassment leveled against him.
Some may say that Herman Cain is simply voicing his faith but the safer bet is that he wanted to draw attention away from his treatment of women. What a grand way of not seeming the least bit insane. True, Cain might be hearing voices but I doubt one of them is G-d's. How about he just address those nagging and persist sexual harassment allegations. Of course, he could always use his newfound connection with the big man to make them go away. Then again, he is quite busy these days since Anita Perry says that she has had conversations with the Lord and he is a Perry backer... Here we go again.
Posted by Manfred "Manny" Funkowitz at 8:36 PM