Guess who does not Like the Occupy Wall Street Movement? Hint... His Directorial Debut has a 14% Rating on Rotten Tomatoes. 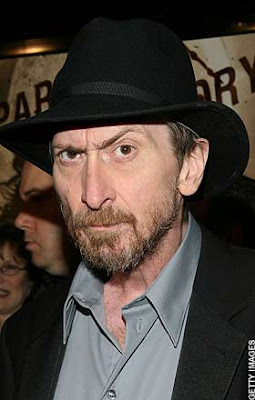 You know, this picture renders this entire post unneeded... It is obvious that Frank Miller is out of his gourd.

We here at PORTEmaus are unflinching disciples of the "World's Greatest Detective" (Batman for those who were either just born or have been living under rock for the past seventy years), however the subject of those who have drawn or write for the character can lead to much friction. Case in point: Frank Miller. I grant that he turned Batman back into a man with The Dark Knight Returns (which for the record is not that good) after decades of camp, the batwatusi and ridiculous catchphrases emanating from the mouths of Adam West and Burt Ward. Now, he wants to offer his opinions on the Occupy Wall Street movement.

Before I move onto that subject, let me first address the sentient turd that is Frank Miller. Honestly, where do you get off? Last time I checked, your past twenty-five (six?) years since your seminal work on Batman was published what have you done? I am asking you. Sin City, 300, Dark Knight Strikes Again and film which resulted in Hawk being yelled at by Mrs. Hawk. That is right, the last twenty years reads like a who's who of shit (I did not even have to mention All-Star Batman and Robin!). Talk about resting on your laurels! I apologize, I could give very little about the Occupy Wall Street movement. Very little. It reads like any other "movement" that has "manifest" in the United States. All bark, no bite and then the media gets bored... The channel is changed.

Considering the banality, misogyny, lack of any redeeming value or intelligence associated with Frank Miller's body of work, you can understand why I am upset about hearing his opinion on anything. Coupled with the fact that he released some tripe that basically serves as a Conservatives wetdream on presenting the Islamic faith (and no, you cannot compare World War II to the War on Terror... That is apples to oranges.). This further proves that not only does Frank Miller embody the worst the comic industry has to offer but humanity as well. Yet, for some reason, somebody decided to put a microphone in front of face and we the general public are forced to endure another flaming turd of his.

As mentioned earlier, I could care less about his opinion on Occupy Wall Street, much like his work it was self-indulgent and at the end of it, I pitied him (this typically happens when I read his work). He should seriously be offered disability by the American government because his insanity has obviously affected his ability to work. Then again, he might consider that his motivation. This does not give you carte blanche to lambaste how individuals spend their Saturday afternoon to exercise their first amendment rights. Now, I understand that you have your own to say what did but to be frank, you are a textbook example for censorship. That is saying a lot since I am as against censorship as anyone... That is saying something.
Posted by Manfred "Manny" Funkowitz at 4:10 PM