Oh, How The Mighty Have Fallen.

You are considering to abandon your presidential aspirations, say it is not so Herman Cain! It seems that he is floundering under the weight of accusations of various sexual improprieties, which have culminated in allegations of an affair. I will be the first to point out that not addressing the "elephant" in the room certainly did not work to your advantage, did it? Also, I have said it before, why did you not investigate your past (with a private investigator) to ensure that their are no "skeletons in your closet" and if something is found (presumably, these allegations would have)... Well, then you save your time and money by not running.

This is the first lesson in politics. Also, do not bring the almighty Creator into the mix when your private life is rife with allegations of infidelity. Seriously, I said it before, did you consider your private life or any before running? I bet it was just a spur of the moment thing, just something to do on daily list. 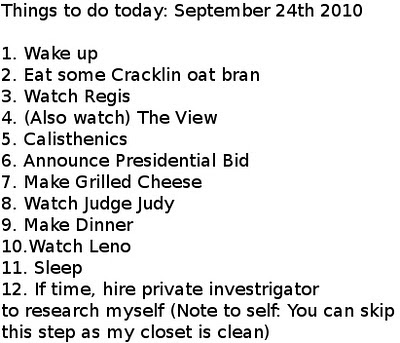 I know, I know... I am kind of beating a dead horse but this is a lesson that Pops Funkowitz taught me when I was young. If you want to run for political office, you best have money and a clean record. If I was taught that when I was young then what is Cain's excuse. When the first allegation came out, he should have been honest and addressed it. Sure, his credibility and reputation might take a hit, he would lose some points but he could salvage it (He would lose any impending lawsuits though, so I kind of get it). By ignoring it made matters worse... Actually, the news of a thirteen year affair did that.

Now, Cain comes from the party that prides itself on being moral and crucifying other politicians (cough, cough... my man Bill) for the exact same thing, this is difficult to rebound from. Of course, Cain steadfastly denies having an affair with Ginger White and that makes sense. However, if the allegations of "showering her with gifts and paying for her to travel to events where Cain was speaking" is true than that is a horse of different color. In no point of human history has a male (married on top of it) paid for gifts or travel expenses without expecting a little something in return (unless said male wants to sleep on couch or get divorced). Here is a thought Hermy (can I call you that?), if these allegations are false and baseless, have you ever thought of a lawsuit (you know, defamation of character and such)? Not surprising considering you did not do the necessary due diligence on yourself prior to running...

Of course, it kind of leads me to believe that they are true... I am just saying. Will this derail the "Cain train?" At the very least, it will take the steam out of it and what is a train without steam besides a device that died in the mid-twentieth century?
Posted by Manfred "Manny" Funkowitz at 10:04 AM