You're familiar with the phrase "man's reach exceeds his grasp"? It's a lie: man's grasp exceeds his nerve.:" The Prestige 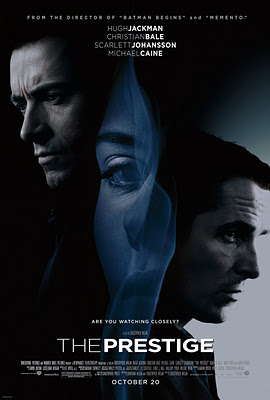 Is there a more complete American (He holds dual citizenship with England) filmmaker (or otherwise - forgoing Nationality) than Christopher Nolan. This assertion caused a minor disagreement with Bence but having watched The Prestige for like the sixth or so time, I hold steadfast in my high opinion of Nolan. Furthermore, this film illustrates that no other filmmaker creates "complete" films than Christopher Nolan (as a digression, is there a better writer or storyteller these days than his brother, Jonathan? Doubtful and again, The Prestige highlights this opinion) and this film is complete from the perspectives of story (and screenplay), acting, cinematography... You name it. 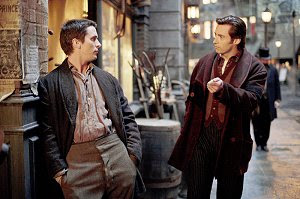 When I first saw the trailer for this film about two dueling magicians, I was kind of upset because it was not another Batman film. Like my fellow gents here at PORTEmaus, I was blown away by Batman Begins and was highly impatient for the sequel. I sat there and immediately thought "you have Bale and Caine" but you could not make another Batman film? In spite of this, I was excited to see this film and it did not disappoint. Having read the novel (which inspired this RETROspective), you cannot have a more unique film adaption than this film.

It retains the skeleton or essence of this novel. It follows the cyclical conflict between Alfred Borden (Christian Bale) and Robert Angier (Hugh Jackman) whose hatred began with the accidental death of Angier's wife. The conflict culminates with the creation of a magic trick so fantastic that it furthers Angier's obession (and hatred) for Borden. This takes Angier clear around the world to seek out the expertise of the world's greatest inventor, Nikola Tesla (This is a reference to my personal dislike of Thomas Edison). Armed with Tesla's machine, Angier takes the step from illusions (and deception) and into science, leading to a physical manifestation of the illusion. 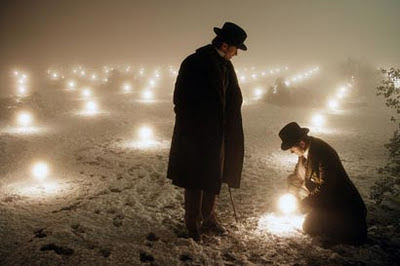 After finishing this film, I am surprised that not many people rank it up there with Nolan's other monumental works (his entire catalog). I am not saying this is a forgotten film but when there is the discussion of Nolan, it is simply Memento, Dark Knight and Inception. Hell, it is never discussed as one of the greatest period pieces of all time or even from the perspective of not being based off of a work by Austen or Shakespeare. I would like to think that this has a lot to do with the inferior "magic" movies that were released in 2006 (Scoop and Illusionist) but I doubt we will even known as there is no debate.

In retrospect, The Prestige is not only an underrated film but it is a great one as well. You have to hand it to Nolan as he actually made me believe that Scarlett Johansson had the ability to act... Which is something that no one has seen since. Anyway, at the very least, the cinematography and art direction were singled out for Oscars. They did not win and it is kind of travesty, if you watch the film then you will understand my point. Anyway, you know a film is great when Christopher Priest's (the author of the book) reaction was "'Well, holy shit.' I was thinking, 'God, I like that,' and 'Oh, I wish I'd thought of that.'" Such a reaction speaks volumes about this film.