After Much Soul Searching, The Train Has Derailed. 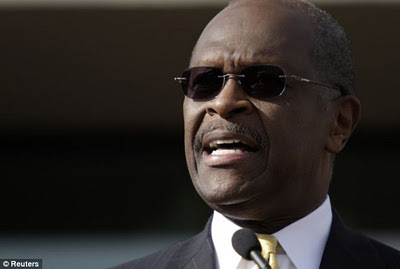 I cannot say that I am too surprised by the announcement that Herman Cain is "suspending" his campaign. Let's be honest Hermy, it is over... I suppose it is merely semantics as "suspending" seems less weak than saying that you are "quitting" your presidential aspirations. What are words between friends, let us be honest, the indiscretions in your private life have finally caught up with you. As I mentioned early, it is not surprising nor do I believe that anyone (even your most diehard supporters) felt that you were innocent of any wrong doing.

Honestly, I mentioned in the previous discussion about the state of Cain's campaign, if these allegations were not true than you hire an attorney and your sue! Sue damn you! However, to the best of my knowledge, this never happened. Honestly, when the first victim came forward, it was apparent that Cain "train" was doomed to derail. It could only go from bad to worse as another came forward and then there was the affair. It was only a matter of time before it was all over.

It should not have taken this long, the writing was always on the wall and Cain's campaign was living on borrowed time. I will say this, at least Cain ended his campaign, the same cannot be said about other floundering bids (Bachmann comes to mind.) What has happened with Herman Cain's campaign further illustrates that American electoral politics is a manifestation of Murphy's law. Simply stated, "whatever can go wrong will go wrong." For Cain, by sidestepping the due diligence step of a campaign (cannot beat this dead horse enough) set all of this in motion and ignoring it did not help either. It is now time to close the book on the divine campaign of Herman Cain...
Posted by Manfred "Manny" Funkowitz at 12:15 PM