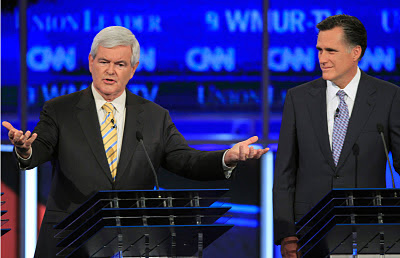 You know who has the greatest debates in the history of Presidential politics? It is the Conservatives. You have flubs, the misuse of information and the downright absurd. Personally, it is this absurd happenings that I find enjoyable as they give me something to write about on a dull Saturday afternoon (Other than working on projects that will allow me to graduate). You might wonder what has my ire this time. Well, fancy and interested reader, it is the GOP candidate's position on Iran. While we are all in agreement that the world would not benefit from Iran possessing nuclear weapons, I find their assertions and solutions to be ridiculous.

First, you have Mitt Romney and his bold claim that "If we re-elect Barack Obama, Iran will have a nuclear weapon." Mitt Romney adds "if you elect me as the next president, they will not have a nuclear weapon." Really, Catcher's Mitt, Really? While I admire the fear mongering, I am curious how you will back up this claim. Are you going to fund, build and pilot your own variant of the Iron Man suit and defeat Iran all on your own? Oh, you want some good old fashioned military action? Hot damn! Ding... Ding, we have ourselves a winner, another costly war in terms of money, personnel and equipment, he has my vote! Newsflash, there is a reason that Bush and Cheney did not talk up Iran that much during their second term (trust me such talk from Cheney in 2005 led to me having a panic attack) and it is because fighting Iran would not be the cakewalk you foresee it to be.

Then you have Newt, the once dark horse of the race, who somehow has battled back into the spotlight. What do you have for us today Newt? Covert action against Iran or more specifically, "maximum covert action" against "their scientists" and what they assert is a civilian energy program (even I am having trouble believing that Iranian claim these days). Newt, I think it is time to invest in a subscription to a newspaper or hell, visiting the website of one. If you had, you would realize that covert action in Iran does not have the best track record these days since twelve spies (whose mission dealt with that same nuclear program) with the CIA were arrested. I guess maybe these spies were not maximum enough.

I find Romney's position laughable as it is out of touch with public opinion on the two wars that we have currently and frankly the country cannot afford any of the costs associated with it. As evidenced by the arrest of twelve spies with the CIA (who were said to be working with the Mossad), Newt is simply reiterating the current approach by the United States to this dilemma and politically, it is the safe stance. The issue remains that all of the GOP candidates blame Iran's nuclear ambitions on Obama, which is laughable considering Iran's alleged pursuance of nuclear weapons did not begin overnight. It spanned several presidencies.
Posted by Manfred "Manny" Funkowitz at 2:32 PM