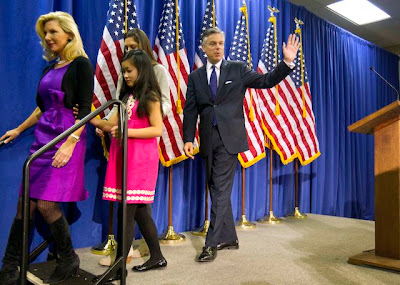 It seems that the bloodbath that has become the 2012 Presidential Primary has claimed another victim. Jon Huntsman has hung up his cleats (or another non-sports related metaphor for quitting) and given up his bid for the Presidency. Now, I know what you are wondering, who is Jon Huntsman? I cannot believe you have forgotten the man who put all of his eggs in the New Hampshire basket and placed third. Then again, I doubt anyone could pick Huntsman out of a line up of one.

Well, we now know how far running a campaign based on being "nice" gets you... Third place... In New Hampshire. Honestly, Huntsman made a valid point that the political discourse in America is too toxic and that simply tarnishing a person's reputation should not be a prerequisite to getting elected. What a novel concept. Furthermore, the irony is not lost on me that the candidate who seemed reasonably sane from an intellectual perspective, had practical political experience and would rather discuss the issues was shown the door.

That is what made Huntsman an interesting candidate. Sure, I was not going to vote for him but in the field of "Not Romneys," he was the only one who did not seem to be frothing at the mouth ideologically (or require a straight jacket for warmth). He appeared to be a gent above politics having served as Ambassador to China for President Obama from August 2009 to this past April. It seemed this did not sit well with any Conservatives who considered him a traitor for working with the "enemy." I guess answering the call from your country, while maintaining the exact same beliefs as the people who you are trying to elicit votes from is a no-no. Glad to see that divisiveness is alive and well.

As someone on the opposite end of the political spectrum, it was not difficult to admire the approach of Huntsman to American presidential politics. A guy with seemingly no skeletons in the closet and running a campaign that focused on the issues not smearing his opponents (the other Candidates or President Obama) barely made a ripple. However, a man with multiple allegations of misconduct, a woman with crazy eyes and man whose time in the sun has long past have all been "front runners." I guess it is true what they say, nice guys do finish last or in this case, third... In New Hampshire.
Posted by Manfred "Manny" Funkowitz at 2:42 AM