We have a rotten apple, Jim: Tinker Tailor Soldier Spy 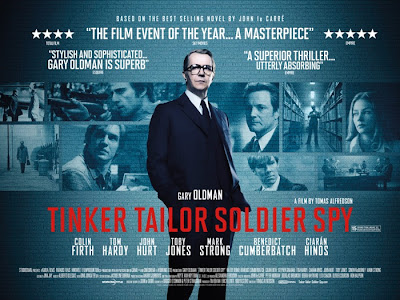 When I was a wee lad and was browsing the stacks at the local library, when I would come cross the works by John le Carré would elicit a chuckle. Perhaps, I found his name to be funny or I was enamored by the works of Michael Crichton (I want to punch my eleven year old self in the face) but I avoided his novels. This was until 2005 when I read The Constant Gardener, which was an amazing novel and film adaption. Needless to say, Manny no longer finds the name of le Carré to be humorous and if the novel behind Tinker Tailor Soldier Spy is one tenth the quality of its adaptation... Well, it would make it be one of the best novels out there. Yes, this film is that good. 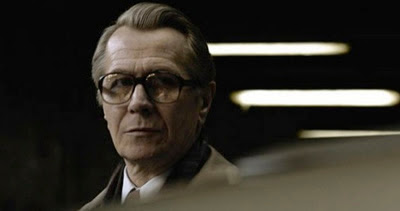 It seems that the Circus (the moniker for the English intelligence service) has a spy in its midst. George Smiley (Gary Oldman) is forced out of retirement by Oliver Lacon (Simon McBurney) to locate and expose the traitor. Smiley takes up the investigation started by his mentor, Control (John Hurt) after his death. What he finds is a trail that stems from the event that pushed him out of the circus and brings a former enemy back into the fray.

The main draw for Tinker Tailor Soldier Spy is the acting, which was impeccable. Nearly every great English actor today is in this film. Gary Oldman is amazing as George Smiley and has the performance of the year. However, it is highly unlikely that he will win any recognition for this performance since the film was shut out at the Golden Globes and SAG awards. Moreover, Tom Hardy is a chameleon when it comes to selecting his roles and his performance as Ricki Tarr highlights his versatility as an actor. 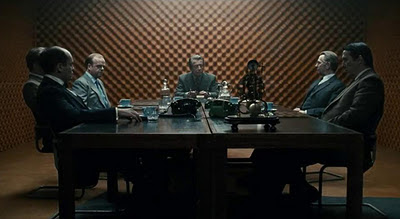 The performances are bolstered by Bridget O'Connor and Peter Straughan's script which is an engaging and realistic portrayal of espionage. Contrary to popular belief, where everything is very cloak and dagger and is devoid of flashy gadgets or explosions. I enjoyed this aspect of the film immensely and how it portrayed Great Britain's role in the Cold War (a low level player and desperate to curry the favor of the United States). For some, this slowing moving and intelligent story might not work but it did for me. Coupled with the Hoyte Van Hoytema's cinematography and the art direction and you have film that feels that it was made it the decade that it was set.

In my humble opinion, Thomas Alfredson has crafted the best film of the year. As this was his English language debut, it is clear that it is possible to make the transition. So, why couldn't Florian Henckel von Donnersmarck do the same with his debut, The Tourist?

Parting Thought:
I will admit that I have not seen the mini-series or read the book but my interest is peaked in both. I feel that the feature film format merely condenses the in-depth plot of the novel. Namely, I am curious what was left out. To the library!
Posted by Manfred "Manny" Funkowitz at 2:20 AM