Spielberg is back this holiday season with another double header. The Adventures of Tin Tin is obviously his lighter fare, in comparison to War Horse. The film marks Spielberg's first foray into animation, using motion capture technology much like Zemeckis has been obsessed with as of late. The results are a bit of a mixed bag, with the problem of the eyes seemingly never going away even under the eye of someone like Spielberg. Never to the extent of The Polar Express or Beowulf, but it is a lingering problem nonetheless. On the other side Spielberg gives us an incredibly youthful and joyous escapist adventure flick which does a great job at replicating the look and feel of Herge's artwork. 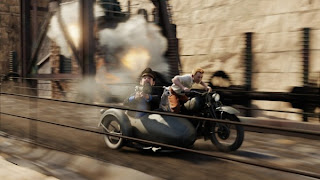 I don't think it even warrants saying that Andy Serkis is great in the role of Haddock, a boozy ship captain with a cursed family line. He brings his usual energy and excels once again as one of the most charismatic and intriguing characters on the screen. Jamie Bell doea fine work as Tin Tin, and succeeds on making him both a boy with a young sense of adventure and mature beyond his years ready to face down the enemy and pull a gun if he needs to. Craig? Pegg and Frost all give some solid supporting work but outside of the two main characters I didn't feel there was anything spectacular. 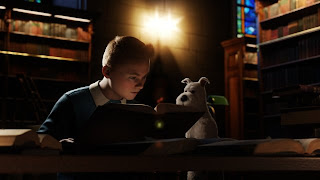 So what about the rest? Well as I said this was Spielberg's first foray into animation and it seems like he's having a blast with the lack of limitations. He has created a globe trotting adventure that pushes our heroes into the most amazing of situations. Rebelling in the fact that his "camera" has the freedom of movement whips around Moroccan towns, takes us through a ship, travels through a dessert, gives us some great swashbuckling, and even plenty of close quarters suspense. There is a youthful exuberance that permeates each scene and it's great to Spoelberg playing in this field again. This s absolutely the film he should have made instead of Crystal Skull, but that's neither here nor there. He isn't shooting for revelatory cinema, this is Spielberg having fun and inviting us along for the ride. 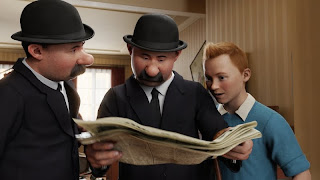 A fellow grand master of cinema also made the jump to 3D this year, but while Hugo truly took advantage of the medium and immersed you in the possibilities of 3D, Spielberg opts for a more seamless approach. Again we aren't berated with silly "let's through arbitrary objects at the screen", rather he creates a world in which the 3D helps to accent scenes such as the motorcycle chase everyone sees on the trailer. Many times throughout he works it into the scenes that you don't even realize it before you find yourself immersed in the inner workings of a ship as its being overrun by pirates.
A subtle and strong use of the medium that is somewhat surprising since an adventure film like this would seemingly benefit from more 3D than Hugo, but it shows a restraint and understanding of film as a whole on the part of Spielberg. I'm excited to see him continue in this medium if it's going to yield the kind of uncynical fun that Tin Tin presents. 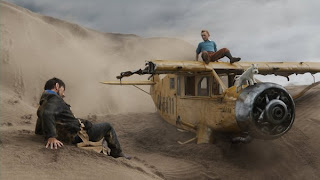 I love seeing Spielberg challenge himself. The source material is tailor made for him, but to see him approach it within a new medium and new technology is exciting. The movie itself is a raucous romp through set piece after set piece, and I imagine if Spielberg continues in this medium with Mr. Jackson producing we are soon to get a truly brilliant Tin Tin movie that deserves to be in the shelf next to ET and Jaws and of course Jurassic Park. For now we are left with a great adventure and some fun escapism that everyone can enjoy, not the complete return to his glory days I was hoping for, but a great deal of fun and the loosest I've seen him play in a long time.

One last thought - I'm sure the absurdly energetic and brilliant trio of writers that worked on this film helped a bit with showing us how much of an inner child Spielberg still had in him.
Posted by Bence at 8:11 PM