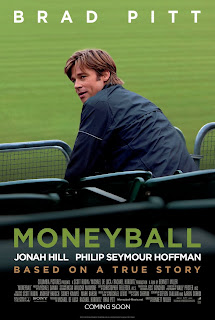 It's not that Moneyball isn't about baseball, it's just about a different kind of baseball. Bennett Miller follows up his impressive debut with this story of a general manager changing the way people manage sports teams. With solid work from everyone involved and a script cowritten by two of the best dialogue writers working in cinema, Miller has made a fine film that deconstructs our national past time and shows its intricacies in scientific detail.

Miller seems obsessed with analyzing American culture and giving us a piercing view of what lies underneath. Capote gave us a stirring representation of the life of one of America's classic writers as well as giving us a view at post mockingbird Harper Lee. Here he has turned away from literature to sports and what could be more American than baseball. The flashbacks of Beane's rise and fall of his own career not only serve to give us a backstory on our lead, but also show how the game transcends generations. There is a lot of fight between the old and the new here. The aging scouts and their discussions of ball players are riddled with emotion and feelings and listening to your gut. Miller contrasts these talks with Hill representing a new school of thought and speaking with scientific accuracy utilizing solid number and figures to back up each point. It's a great conflict that powers most of the movie, but through it all Miller never fails to show the passion that everyone has for the game and how much joy it brings the fans. 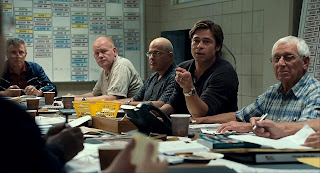 That passion is perfectly represented with restraint by a great performance from Pitt. He's been getting a lot of attention for the role which is refreshing since the Academy usually goes after more "showy" roles. Pitt's role is not flashy at all, rather he is a simple man with a love for the game. He loves it so much he wants to see it evolve, he wants nothing more than to matter. He never made it as a player, so now as a general manager he has a chance to make a difference and affect the game in a big way. Its the opposite of a showy performance, but Pitt make it memorable by making the character incredibly charismatic and inherently likable.

Jonah Hill is Pitt's right hand man and a wunderkind of sports analytical. He is a huge champion of the work of Bill James and a threat to all of the older generation working for Pitt's general manager. He is getting a lot of accolades for his work, and I would say its not without merit, but I would never put it against Brooks in Drive or Plunmer in Beginners. It is a huge departure from his standard fare, and it shows the guy has something else to offer besides his Apatow schtick. 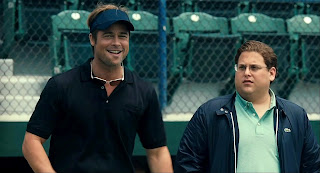 I hope Miller continues to take on various aspects of American culture and present them in new ways. It's yielded some solid work so far and I think going forward he will continue to provide strong adult dramas. Like I said I don't think Hill gives an Oscar worthy performance but it's a great example of him not being Jonah Hill. I love Pitt and thought he did an amazing job, no Fassbender, or Oldman but a good job nonetheless. 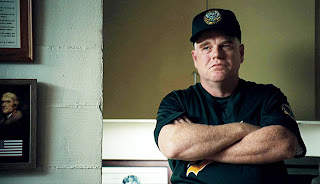 One last thought - I didn't even mention Hoffman in a small but great role as the coach who doesn't agree with Billie's new ideas. Hoffman is such an amazing actor and he shows just how memorable you can be with a small role.
Posted by Bence at 9:31 PM