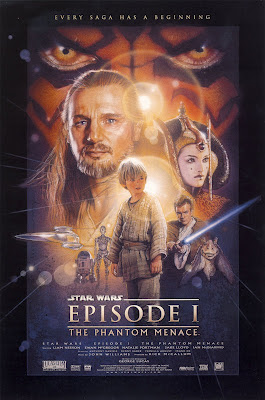 Like most children, Star Wars hold a very special place within the cockles of my heart and I waited anxiously many a year to see "A long time ago... In a galaxy far far away..." on the big screen. 1999 rolled around and the younger version of myself saw it opening day... Needless to say, I left excited but a subsequent viewing revealed the truth. Episode I was not that good. Flash forward twelve years and it seemed like a great time to expose my oldest to a "galaxy far far away" and the first of three movies that I do not hold as dear as Episodes IV, V and VI. 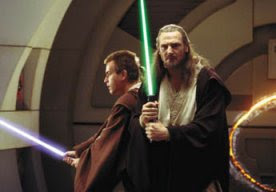 Episode I is the tale of Naboo being held hostage by the dastardly Trade Federation and the response of the Galactic Republic was to send two Jedi Knights (Liam Neeson and Ewan McGregor) to resolve it. It quickly becomes apparent that the situation is not simply black and white with the Federation's actions being dictated by a Sith Master. Qui-Gon and Obi-wan leave Naboo with the Planet's (democratically elected) Queen (Natalie Portman) and because of mechanical issues have to land on Tatooine. While on this desert planet, Qui-Gon meets the prophesied "chosen one" of the Jedi Knights, who will return balance to the force. After receiving council from Yoda (Frank Oz), Qui-Gon and company return to Naboo to free it from the Trade Federation's blockade.

Like most Star Wars fans, this film has a bevy of problems. Seriously, the crux of the story is the basis of taxation disputes. Wow, it really sounds as if George Lucas had this written for twenty years and was not scribbled down on paper a few days before production began. Honestly, the story is the least of this film's problems (which I will discuss momentarily) and I am going to go out on a limb to say that Episode I is not the worse film of the prequel trilogy (I will explain that further in the next RETROspective post). Granted, it has Jar Jar Binks (played horribly by Ahmed Best), a character whom a five year old hated and Jake Lloyd, who has the distinction of being one of the worst child actors in the history of cinema but it does have several things going for it. 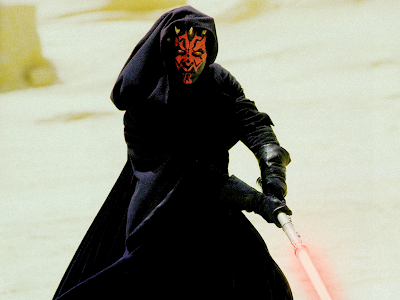 The Phantom Menace tends to be lambasted because of story issues (the dialogue in particular), casting and of course, Jar Jar. Rightly so, it is not a good film by any means, however, its special effects hold up quite well and there was not extensively on CGI sets like Attack of the Clones (Trust me, I will get into that next time). For these reasons alone, you can at least watch the film without being taken out of it. Sadly, the same cannot be said about the story or the dialogue. Unlike most diehard fans, I do not hate Episode I, I do not like but I have come to terms with its existence. After all, I grew up with the other three films and never really expected them to live up to my expectations (Then again, I am a cynical cuss). Then again, the only reason I revisited this film was to expose my daughter to the "galaxy far far away" and she liked it. When one ponders this, it kind of seems... Appropriate. 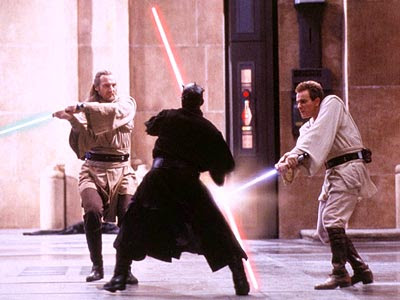 The final lightsaber battle is still the highlight of the film. Honestly, it was a boneheaded move to kill Darth Maul off in the first film. You know who are forgettable characters? Count Dooku and General Grievous... Sigh.
Posted by Manfred "Manny" Funkowitz at 2:33 PM