"Crowns do queer things to the heads beneath them:" A Clash of Kings

PORTEmaus Literature Society No. Ten: A Clash of Kings 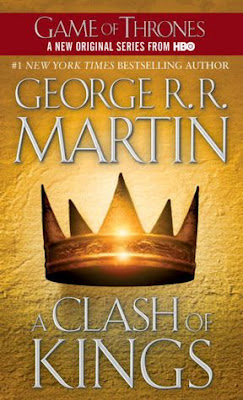 A Clash of Kings

In the previous Literature Society post, I explained that I am not a fan of the fantasy genre. However, I do enjoy well-written imaginative tales. Two novels and roughly fourteen hundred pages later, there is one thing that you can say about George R.R. Martin's fantasy series and it is that these books are well-written. In fact, I think the argument could be made that A Clash of Kings improves upon its predecessor, mainly because I knew where Game of Thrones was going having seen the television series. In a way, it was refreshing to be able to fully develop the world of Westeros and the rest of the locales in my mind rather than such mental imagery taking the form of the series.

When A Clash of Kings begins, Ned Stark (the hand of the King) and King Robert Baratheon are dead and the world is plunged into a series of chaotic conflicts because of the power vacuum. The claim of Robert's son, Joffrey to the iron throne are contested on allegations of incest between the Queen and her twin brother (which are also true). This has led Stannis and Renly Baratheon (Robert's brothers) to raise large armies to remove Joffrey from power and install themselves in their place. In the North, Robb Stark (Ned's son) is engaging in battle against the Lannisters (The Queen's family) and their armies across the riverlands with much success. This has put many in the capital on edge as food and water begins to become scarce, leaving the inhabitants and the reader wondering who will win out in the impending battle.

For those curious, that was a simplification of the novel's plot. Let's face it, a lot can happen in the span of seven hundred some odd pages and with nine point of view characters a lot does. Clash of Kings introduces two new point of view characters into the series and they happen to provide some of the most exciting parts of the book including a suspenseful event that involved the death of two characters (one major and his younger brother). This is what makes the narrative structure of these novels so interesting. It provides the reader with an intricate knowledge of the happenings in the novel, while in other circumstances, the reader learns plot points as the characters do.

A Clash of Kings is a pleasant (albeit a depressing) read to someone who is not a fan of the genre. It was surprising in the sense that it was better than Game of Thrones which is a feat in and of itself. It will be interesting to see how the show is adapted in April and how it will play out with the version in my mind. It is at this point that I am hooked on the series... I suppose we all saw that coming. As I mentioned earlier, I am a sucker for good storytelling and willing to go out of my normal reading habits to try something new. It goes without saying that this book comes recommended but of course, one should read the Game of Thrones to have any idea about what is going on.

Parting thoughts:
I read an interesting article in the New Yorker about George R.R. Martin and the relationship with and expectation of the reader with the writer. It really highlights Martin's reverence for Tolkien and counters me notion that Martin's world is larger than Tokien's. Yes, I realized the folly of such a notion and subsequently had my nose rubbed in it. I blame it on over-excitement.