"I made one decision in my life based on money and I swore I would never do it again:" Moneyball 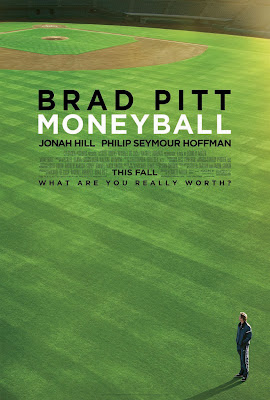 They say there is a method to the madness that is professional sports scouting. Being an avid fan of both baseball and football, I never was able to glean what that method was. Having spent way too much time watching the scouting combine for the latter of my favorite pastimes, it seemed that prospective athletes are treated more like horses or livestock more than anything. I am also been a fan of using statistics to glean a perspective (at the very least to discern trends) on sports performance for awhile (after all, it is the only reason I give a passing glance to fantasy sports). Sure, all of that talk of math sounds dull, it is ironic that it made for a damn good film. 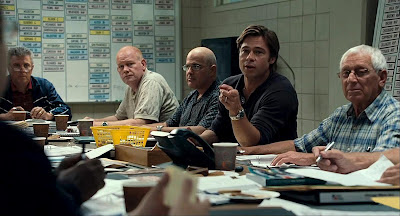 Moneyball is the story of Billy Beane (Brad Pitt), a former major league player who is the general manager of the Oakland Athletics and is faced with a dilemma. The A's have lost three of their most important players (Jason Giambi, Johnny Damon and Jason Isinghausen) to other teams and ownership will not allow for a growth in payroll. This attitude forces Beane to adopt the principles of sabermetrics (the analysis of baseball through empirical evidence, namely statistics). This method runs contrary to what scouts have been doing since the beginning. To implement this method, Beane hires Peter Brand (a composite of Paul DePodesta played by Jonah Hill) and they compile a roster of cheap players (who have perceived deficiencies) who lead the A's to a MLB record twenty straight wins but also the ALDS (American League Divisional Series).

Moneyball excels on practically every level and it is not surprising that the film has been recognized for six academy awards. Unfortunately, it is has some stiff competition and it will be a shame that if it does not walk away with the adapted screenplay award considering that the story/ dialogue is compelling. Furthermore, I do not know why Sorkin lit the world afire with the screenplay for The Social Network and little has been said about this screenplay... Which (in a word) was "better" than that film. I know Hawk will agree with that notion. It is also kind of shame that one of the PORTEmaus favorites at cinematographer, Wally Pfister was not singled out for praise his work on the film. I know there were a lot of well-framed films released this year (although no body could Lubezki's work on Tree of Life) but as always, he did some great work. I would wax poetic about the lightings in this film as well but lets face it, nobody cares (Which is a shame). 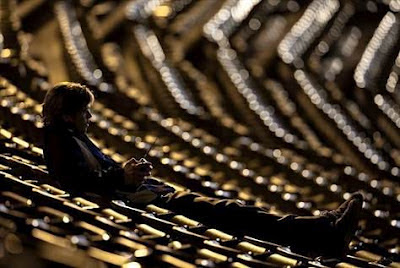 When I first started hearing about the cast for this film, I was slightly surprised. Not so much about Brad Pitt (who is pretty consistent in his performances) but I was appalled by the casting of Jonah Hill. In the hallowed halls of the Maus, you will find little love for either the short doppleganger of Seth Rogen. However, even I have to admit that Hill was not that bad in this film nor did I feel the urge to leave the room when he took the screen. Then again, I am a little perplexed by his Oscar nomination, it was a good performance but not worthy of that recognition. Seriously, his spot should have went to Albert Brooks for Drive or Tom Hardy for Tinker Tailor. In spite of this nonsensical segue, I really thought Pitt did a wonderful job as a man hampered by the mistakes of his past (Signing with the Mets) and seeks to do better in the future. Then again, I am a sucker for such self-reflection.

Posted by Manfred "Manny" Funkowitz at 11:52 AM