"The greatest fools are ofttimes more clever than the men who laugh at them:" A Storm of Swords

PORTEmaus Literature Society no. Twelve: A Storm of Swords 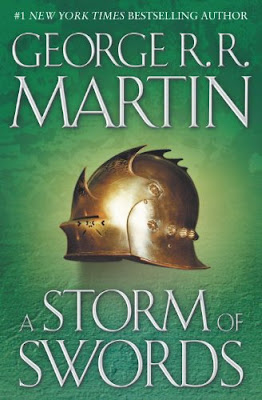 A Storm of Swords

When I first began this series, I never expected to enjoy them as much as I have and I can sort of understand why the wait between books has become a heated debate. Several thousand pages read thus far and I admit that I hooked on the literary world that is Westros. Reading these books have become the primary source of entertainment these days. Take that television! You have nothing that can take my attention away from these books... Well, besides season II of Game of Thrones (Which starts in a few weeks). If you have read the past two reviews and have not started A Song of Ice and Fire, you are missing out on some good stuff. After all, what can beat political intrigue in a medieval setting. Not much.

As with the previous Literature Society reviews, these books are so complicated that it is difficult to fully explain the plots and A Storm of Swords is no different. I think this has a lot to do with the thousand page count (Ok... Ok... It is was nine hundred and forty-two pages). Anyway, the war of the five kings is drawing to a close as the Iron Throne has destroyed the forces of King Stannis Baratheon and the Greyjoys have seized the North. Robb Stark (The King in the North) is now being forced to reclaim his lands, which requires him to also repair past allegiances or risk losing the not only his crown but his life. Also, while the fight for the Iron Throne continues to rage on, a force begins to amass to invade Westros and threatens to destroy life as it occurs currently.

If A Clash of Kings was a sad tale then A Storm of Swords is downright depressing. This does not reduce the enjoyability of the story but it does ensure that some of your favorite characters will make it out alive. Say what you will about George R.R. Martin, the man has no qualms with killing important characters off. While this leads to some really shocking moments (So many of them that Lady Funkowitz has told me to either tell her what has happened or shut up about it), it really keeps the reader guessing about where the story is heading or who might make it to book seven (if it is ever written... I have the utmost faith in you, Martin).

Regardless of what characters make it to the end of the series, it is an understatement to say that the series is just enjoyable... Actually, it is damn good. My excitement for it has carried over to giving copies of the book as gifts and I have even begun trying to get Lady Funkowitz to read it (I am getting pretty close). A Song of Ice and Fire is some of the best contemporary fiction (of any genre) that I have read in recent memory (of course, everything is better than textbooks). While the page count might deter the casual reader, A Storm of Swords is a compelling piece of literature and makes an already great series even better.
Posted by Manfred "Manny" Funkowitz at 9:02 PM

Email ThisBlogThis!Share to TwitterShare to FacebookShare to Pinterest
Labels: A Clash of Kings, A Song of Ice and Fire, A Storm of Swords, Game of Thrones, George R.R. Martin, HBO