Kansas for the Win? Seriously? I am Picking Oxford to Take It All! 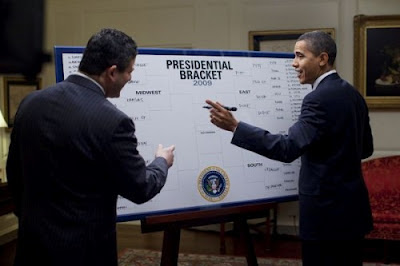 I do not understand the popularity of NCAA Bracketing. There is a fever that infects administrative offices to universities nationwide. Now, it appears that the March Madness germs have made their way from a walking germ factory to the White House. As seen in the picture above, now our President is hooked. March Madness bracketing is a practice that ostensibly permeates all facets of life in America, threatening to bring the country to a standstill.

You might think that I am exaggerating but consider the picture above yet again. The President of the United States has nothing better to do than participate in a meaningless activity built around college basketball. I guess he really wants to collect that fifteen bucks from the White House pool. It would have been twenty but Eugene the intern is a deadbeat when it comes to paying up for things (He also owes Secretary of Energy, Steven Chu, a fiver from last week's pizza day at the White House weekly).

Back to the point at hand, why is the President of the United States clearly engaging in an obvious photo opportunity? Is his schedule so empty that this is the best thing he could do or is he really that much of a "hands off" boss? Last time I checked, there are far more important things going on in the world today. Violence in Syria or Israel on the verge of attack Iranian nuclear sites in an Operation Opera-style air strike. Alright, I concede, the hypothetical assertion that Eastern Central South Carolina Polytechnic State University winning a bunch of college basketball games takes precedence over such trivialities. I am glad that the media has done its job and kept the Commander in Chief on task.
Posted by Manfred "Manny" Funkowitz at 9:30 PM