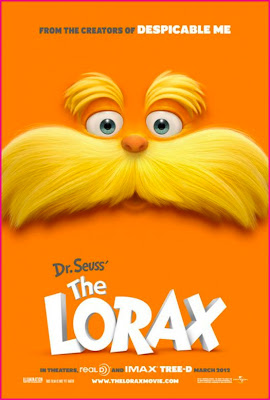 As evidenced by the previous Literature Society post, I have a soft in my heart for Dr. Seuss and The Lorax in particular. I am vocal in my defense of the purity of its simple morals and when I first saw the advertisement for this film in Entertainment Weekly, I was quite upset (to say the least). After seeing the numerous product endorsements and tie-ins (from pancakes, diapers and cars (are you kidding me!), I was livid at what they have done to one of my favorite books. If I had not promised to take my oldest as a reward, I would have been on a street corner picketing this film. In short, if Theodor Geisel had not died twenty-one years ago, this would have killed him.

This bastardization of a beloved children's classic tells the story of Ted Wiggins (Zac Efron), a boy whose idealism begins and ends with his desire to get with his red headed neighbor. He lives in the walled city of Thneedville, where no one has ever seen a tree nor do they care to since they have fake trees. In addition, they purchase pure air from a midget named O'Hare. After seeing Audrey's (Taylor Swift) mural of Truffula Trees, he vows to get her one because she jokily says she would "marry" the man who would get her one... Idealistic motivation my ass. Ted seeks out the Once-ler (Ed Helms) to see if he can obtain a real-life tree and gain Audrey's hand.

Honestly, this adaptation of the Seuss' classic took some of the elements and applied them as a window dressing to a story about a twelve year old trying to get with a high school girl. Oh, it also became a vehicle for hawking cheap wares. From a Seuss perspective, The Lorax is soulless compared to its source material and this is blatantly apparent from the opening musical number. Yes, if you like this book, you will hate the movie from its simplistically composed opening number. Add a few of those and somehow attempting to make the Once-ler sympathetic from the get go.

There is a reason why the original Lorax is only twenty-five minutes and why this adaptation should not have much longer (An hour and half was far too long) as it waters down the simple morals of the book with story elements from other crappy children movies. You would think that this would have made the Lorax parts of the story would have been remotely engaging. They were not since they completely downplayed the anti-Capitalist sentiment of the book and made it seem like the Once-ler cared about the environment while he raped it. The long and short, The Lorax is simply a means for putting some relatively famous people's voices on a screen and using a timeless tale to sell seventy different products. There is not much that redeemable about this film. The voice acting was uninspired, it was too long and while being called The Lorax, it was not The Lorax. Screw you, Universal.

Parting Thoughts:
Why do we have to suffer through Betty White... She is one obnoxious old lady.
Posted by Manfred "Manny" Funkowitz at 8:04 PM