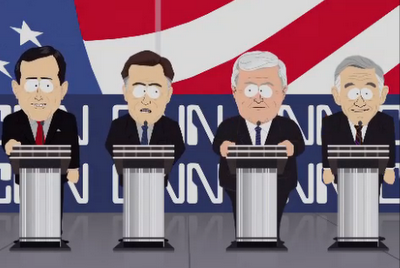 While my older sister was in town this past week, she broached a taboo subject with Grandma Funkowitz. She asked "When will you guys select a candidate, it is kind of getting old at this point?" To which my mother responded, "I am not a Republican." Bold talk for a woman who has voted Conservative for at least the past twelve years, maybe more. I guess George W. Bush, John McCain and possibly even Bob Dole voted for themselves. Anecdotal story aside, the point remains, "how long is this going to drag on?" For those curious, this parade is going to continue through June.

After watching this week's South Park, even my weak enthusiasm is waning. I know that I am not the only who thinks the 2012 Republican Presidential Primaries is "2000 and late" (I apologize for the phrase but I had to work it in). Granted, I have nothing invested in this process, mainly because I am not Conservative. I admit that in the beginning, it was highly entertaining with the relative indecisiveness of the participating voters and the media coverage but now nearly one year later, I am tired of hearing about it. I am wondering who is running the Republican National Committee and why his grand idea of starting in May 2011. I suppose it has worked out given the aforementioned indecisiveness.

One of the great aspects of the South Park episode (captured in the picture above) is how it portrayed these debates. The candidates are "full of sound and fury signifying nothing" and it is more of the divisive political rhetoric that America has grown accustomed to. Please note that I am not absolving the Democrats of any guilt about participating in such shenanigans. Honestly, the whole mishegas is making more me apathetic with each passing day. It kind of has me missing Jon Huntsman, while it is unclear about his sincerity to not engage in partisan attacks but the possibility was refreshing. To come back to the point at hand, I cannot handle such things dominating my headlines for the next two months until the convention as it has dragged on long enough. This is exacerbated by the fact that even the simplest mind knows that Catcher Mitt will be the 2012 Presidential Candidate for the Republican, which made the whole exercise a farce.

Then again, I suppose it is only going to get worse as we move closer to the inevitable Romney/ Obama clash in November.
Posted by Manfred "Manny" Funkowitz at 12:01 PM