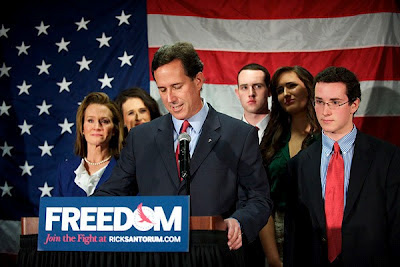 One cannot be surprised by the decision of Rick Santorum to "suspend" his presidential aspirations. I cannot say that he will be missed or that I am sad to see him go. Even though most diehard Republicans that I know were scared by the mere prospect of President Santorum. Honestly, who would not be... Many of his positions towards homosexuals, climate change and even his attitude towards higher education were (for lack of a better word) medieval. Now, I do not know about you, dear reader but candidate Santorum gave me the heebie geebies. He embodied the worst that Conservative politics had to offer. Thankfully, he had an icicles chance in hell of turning that "candidate" into "president."
It seems that nobody explained to him that extremism will get you nowhere in our society. I am not speaking of just Conservatives but Liberals. After all, Bill Maher and Michael Moore hardly follow in the Shellian tradition (That is neither here nor there). Santorum was simply another face in the Republican cavalcade of crap (Bachmann, Cain, Perry, Paul and Gingrich) and certainly he comes nowhere near man (or candidate) that was Jon Huntsman. The best that Santorum could hope for was being invited to the prom but not being chosen as 'Queen.' For a guy who stood vehemently opposed to President Obama, he really did go out of his way to get him re-elected every time he opened his mouth.
I suppose that I am torn by the exit of Rick Santorum from the 2012 Presidential primary campaign. His behavior secretly makes me believe that he is on the proverbial "take." His presence simply made it rivals look crazy by being around him (Although, Ron Paul needed no help in this regard). Oh well, the extremist political stances could not last forever. Now we are left with Catcher's Mitt and candidates too dim to realize that it is time to suspend their respective campaigns.
While I am on the subject, who decided to use a euphemism for the act of "bowing" out? There is no shame in admitting defeat. You did something that a minute portion of the population will ever do... Pissing away an obscene amount of money for privilege of being hated by millions while leading this "glorious" nation (Better you than me). You tried and failed... This is not combat, there is no tactical retreat, you could not garner the necessary amount of votes to continue. "Suspending" a campaign implies that you will return, as we have seen with others before you, you do not come back from this. Oddly enough, I said the same thing about Rick Santorum when he announced his candidacy.
Posted by Manfred "Manny" Funkowitz at 8:15 PM