Batman: The Brave and the Bold - A Hero's History in 3 Seasons. 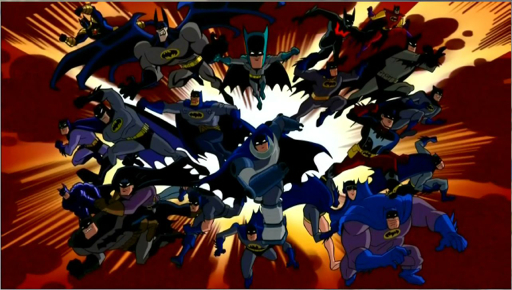 With The Dark Knight Rises coming this summer excitement is at a fever pitch here in the offices of the Maus. There is a unanimous agreement that we love Bats and his adventures with Nolan. So in honor of our collective man crush on DC's allstar, this is the first of many posts taking a look at the many iterations of our favorite psychologically damaged hero. I hope to get through as many of these as possible, but Bats has a rich history so we'll see how far I can get. Today is all about the latest animated version of our hero, that's right, today we look at Batman The Brave and the Bold, the most recent interpretation of the character in which he teams up with different super heroes each episode. The show has been the subject of much controversy since its onset due to its light hearted approach, and focus on the more obscure elements of the Batman mythology. There is little continuity within the show and takes place mostly outside of what we would consider canon(save for a few episodes) and dives into Batman's surreal adventures that take place in one shot(mostly). So what did I think? Well the short version, I never gave the show a chance and like witch hunters trying to ban Catcher from schools, I made a judgement from only watching bits and pieces of the show. I was wrong to do so, the show is an amazingly nostalgic piece of animation that presents obscure characters and silver age heroism to a new generation. Crazy? Well read on, hopefully I can convince you to give it a chance. 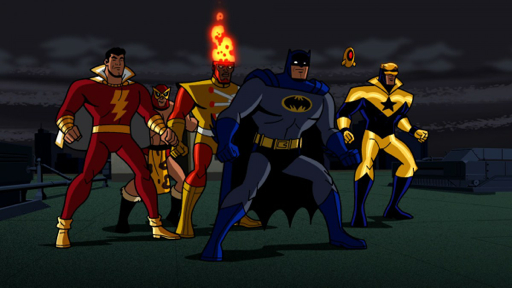 Elephant in the room? No this is not better than Batman: The Animated Series. And to be honest that's what was holding me back a lot when I tried to watch it the first go around. But this isn't the same Batman. Sure that Batman dealt with some supernatural elements but the show achieved a sort of gritty realism, almost a film noir aesthetic for the whole family. This show isn't trying to do that. This isn't Nolan's Batman or Snyder's or Dini(although Dini wrote a few episodes). This show is utter and complete FANTASY. This is a show about superheroes and gadgets and team ups. It uses those as a filter to create a series long statement on the nature of a hero, and the power of belief in oneself. It is all too important that you get that out of your head. Because if you keep wanting The Animated Series or a gritty Batman, you're going to be disappointed. Keep an open mind and power through some episodes and you'll see just how great this show can be. 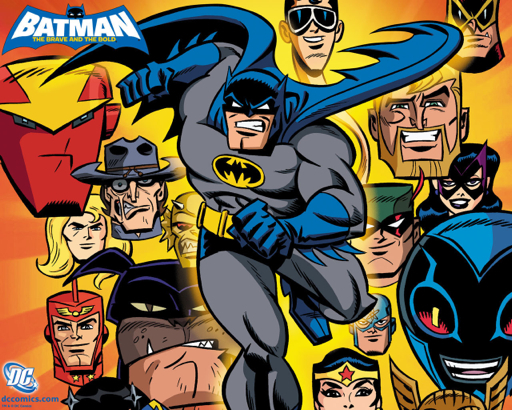 I know it's hard, because it was hard for me too. Being a huge fan of the darker Batman and especially Nolan's amazing interpretation of the material. Even when it comes to the comics, growing up I loved Death in the Family where Todd gets brutally murdered, and I loved A Lonely Place To Die where Drake comes in to help an obsessive Batman move on. Now, Snyder is doing amazing work breaking Batman down and giving us a man on the edge of sanity as his world crumbles around him. All that clouded my head of what Batman could be. Just because those are my favorite made me forget that Batman has been around for decades, and has had many different kinds of adventures. So even though my favorite ones might be the grittier ones, doesn't mean they're all like that. In fact I feel embarrassed to have been so closed minded to forget how crazy and surreal Batman's life has been. He's a founding member of the Justice League, an interdimensional traveler, he even shot a god in a rare act of using firearms. One of his most famous rogues controls plants, and another is a cryogenic genius who has an ice gun. Past that, you have a man bat, literally, you have a guy who dresses like a moth, and a gentleman/demon who speaks in perfect rhyme. That's just scratching the surface. The point is, Batman is bigger than just the dark loner who roams crime filled Gotham.

This show celebrates the fact that Batman is an archetype for hero. In a move that would make Morrison happy, they show that Batman transcends space and time. He goes from fighting space aliens with Adam Strange, to bounty hunters with Jonah Hex, to eternal cavemen with Booster Gold, to even fighting ghosts alongside Sherlock Holmes. This idea that Batman is not bound by the shackles of time and space allow them to tell a myriad of tales. This is where I really started to fall in love with the show. Realizing that the creators were essentially obsessive fans interested in bringing the obscure and the surreal to life, made me happy. They honor the different Batmans throughout his history and make clever nods and Easter eggs in each show. Where else are you going to find Rainbow Batman fighting against Crazy Quilt and his light gun(taken from an actual comic), or the Batman of Zur en Arr(Morrison referenced this one too), the alien Batman who actually has powers. In the background you see numerous times the Cowboy Batman from Morrison's run, or even the vampire Batman from Moenchs mini series. The whole show drips with nostalgia and is such a celebration of the silver age and how surreal it could be. The silver age was full of idealism and heroes were heroes with little gray area. This show reminds us of that, while at the same time commenting on the problems that arise from that. Aquamam with his intense bravado, is actually really insecure and even needs motivation himself, Blue Beetle lives on constant shadow of his predecessors, and Booster is overcome with ego, and it is only when he lets that go can he really be the hero he was destined to become. 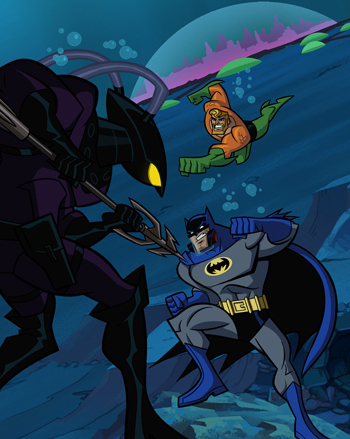 This is a show for the fans. This is a show that rewards you paying attention. Each character and story line are heavily influenced from the comics and they dig deep. If you ever wanted to know a complete history of the Blue Beetle well nows your chance. After giving it the respect it deserves I can't imagine a true comic book fan not loving the show. This Batman is a superhero. His friends can fly and have super strength and power rings, and they fight demons and aliens and manimals. Is it lighthearted? Absolutely, and yeah it gets cheesy, but even the jokes are mostly rooted in the history of the comics and lampooning how ridiculous they can be. For instance there's a short bit with jungle Batman and he keeps referencing his dedication to fighting "Jungle based crime", it's a deadpan delivery that kills me every time. For anyone who knows and cares about the history of DC this show was made with them in mind. They have taken all these storylines and characters and tweaked them slightly, to appeal to a new audience. 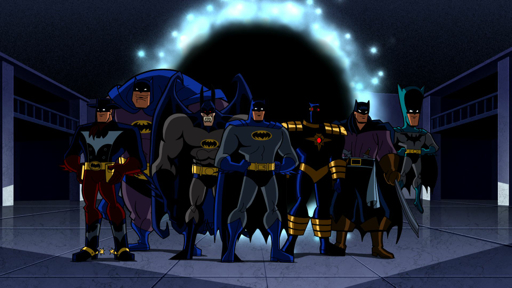 I can go on and on, because honestly, I've never had such a turnaround on a show. And I know so many of you out there probably feel the same. But if you actually like Batman and comics in general you owe it to yourself to give this show a shot. Yah I know most of you, if you've even gotten this far, are laughing at me and I've probably lost all credibility, but that's ok. What else do I have as a writer than my convictions and I hope at least some of you out there will give this show a shot because it is something special hidden underneath it's youthful exterior.

Before I finish here are few of my favorite episodes. 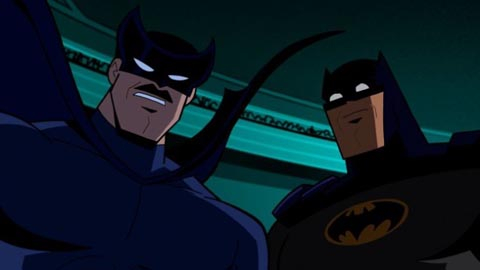 Chill of the Night
Dini writes this awesome episode as The Spectre and Phantom Stranger take Bats on a journey through time to discover his parent's killer. Along the way Bats teams up with his father to stop crooks at a charity function and has to choose between killing Chill and keeping his virtue as Bat. Great episode featuring Kevin Conroy, Mark Hamill as the angel and devil on Bats' shoulder and Adam West and Julie Newmar as his parents.

Shadow of the Bat
Batman suffers a bite from Dala and becomes a creature of the undead. As his vampirism grows while aboard the watchtower the members of the Justice League attempt to deduce what is happening with our caped crusader. I love the nod to moenchs story in which Batman becomes a vampire an ends up biting Gordon and Alfred, and I love the way the show plays with traditional vampire movies. 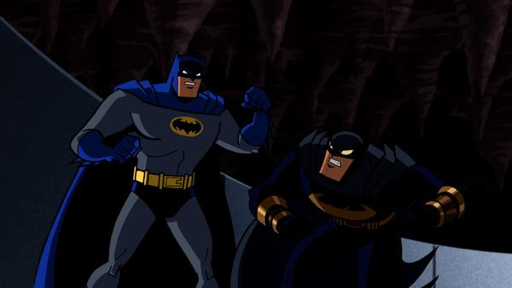 Deep Cover for Batman/ Game Over for Owlman
This two parter take Batman to an alternate reality where Owl Man and his injustice league are the villains and the joker(red hood) are the heroes. I've always loved Owlman's universe and the second episode features a team-up between Batman and the Joker which yields so much awesomeness.

Time Out for Vengeance
The Justice League with the help of Rip Hunter must travel through time to save the various Batmen from being assassinated by Equinox and his minions. Heavily inspired by Morrison's Return of Bruce Wayne, it is not a straight adaptation but the connections are there and great to see on screen.

The Knights of Tomorrow
Flash forward to the future where Bats has retired and Grayson has taken over the mantle and is training Damian to be Robin. Damian is unsure of himself until the Joker resurfaces and he is forced to live up to his destiny. They tweaked Damian's story quite a bit, but I love that this episode dealt with Grayson as Bats.

Trials of the Demon
Batman is brought into the past by Jason Blood to help solve a strong of murders he is being accused of. After teaming up with Sherlock Holmes the group chases down Gentleman Ghost(before he was a ghost). Holmes and Batman...too cool to not love.

Hope you give it a chance...or maybe I'm just crazy. Either way it's a fun show full of surprises and obviously made with true fans in mind. 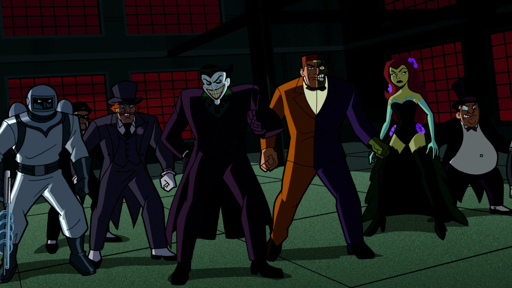 One last thought - I know I didn't really discuss The Joker, but as far as standard rogues gallery goes he's the most consistent here. His style is inspired by the first iteration of te joker and he is definitely much more insane and chaotic than any of the more modern interpretations which give him a much more calculating and ruthless image.