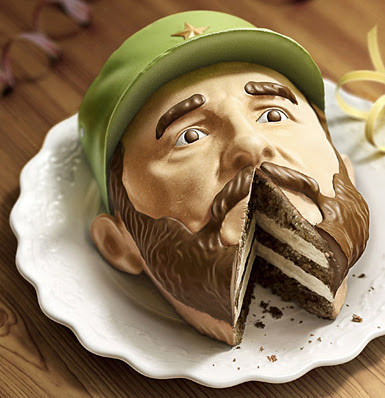 You know, I Asked for a Thomas Jefferson and they gave me a Castro... You get what you paid for. Why is there a picture of a Communist confection atop this post? Who knew that Fidel is filled with a mixture of chocolate and whip cream frosting? The answer to this first question is that it is birthday time at PORTEmaus. The Maus is entering into its fourth full year! On this momentous date in history three years ago (largely forgotten by the masses and the annals of time), a lone man penned an altogether ridiculous article associating Gerber formula with Fascism. While it was largely plagiarized from a Manny Funkowitz status update on Facebook, it garnered three comments and one "thumbs-up." Sadly, the remaining posts for the year did not receive such levels of praise.

The year that was the "terrible twos" certainly witnessed results that were wholly unanticipated by yours truly. The average amount of readers on the site grew from roughly five to at least fourteen. Moreover, the writing staff went from a lone man in a shack on a pond punching at the keys of an old-style Hermes typewriter to a phalanx of five, who smashed the traffic records of the Maus. Granted, besting a monthly high of fifteen or single post record of seven was not difficult. In short, year two completely changed the landscape of this website. What will year three look like? I have a vague notion of where the site will go. Who am I kidding, like all things in life, I am winging it. Truth be told, that too is a lie, I have an idea where we heading. Upwards and onwards, figgering on biggering and such. It will be interesting to see how it all pans out. Oh, the places we will go.

Happy Birthday, you old Maus you.