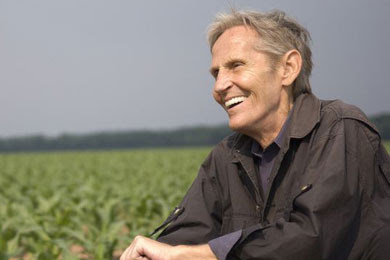 I heard a record called Music from Big Pink and it changed my life forever. I quit Cream after I heard that record. I didn't want to be in that band making that music anymore.
~Eric Clapton~

I hung out with the Band and Dylan in Woodstock and remembered what it was like, to have that camaraderie, that's how it was supposed to be. I came back and quit the Beatles.
~George Harrison~

I gave Mick a copy of Music from Big Pink and a bootleg of The Basement Tapes to listen to on an airplane. After that they stopped the psychedelic stuff, that's really where Beggar's Banquet came from.
~Marianne Faithful on Mick Jagger~


He was my bosom buddy friend to the end, one of the last true great spirits of my or any other generation...I still can remember the first day I met him and the last day I saw him. We got back pretty far and had been through some trials together...I'm going to miss him
~Bob Dylan~

Thanks for carrying the weight of that backbeat and great vocals for decades, inspired so many
~Tom Morello of Rage Against the Machine~

He was so talented...a genius...like an older brother to me
~Robbie Robertson of The Band

One of the best singers and drummers of all-time, so sad to lose him.
~Patrick Carney of The Black Keys~

A true inspiration.
~Zooey Deschanel of her own massive ego.~

The loudest thing I ever heard was a freight train going by and Bob Dylan playing with Levon Helm and the Band...
~Marlon Brando~

The greatest thing for me in my professional career is he called me his partner.
~Larry Campbell of Helm's later albums/live shows~

How do you write a tribute about a man who's music who's meant more to you than, well, just about anyones. I suppose it starts with the memories: that moment in Fry's Electronic's of buying a Band CD just to hear a cover of a Clarence 'Frogman' Henry tune; watching The Last Waltz for the first time, having bought it with a best buy card a hot chick paid for part of the video work you did for her with; making out with a girl in the front seat of your car, parked in a Sonic waiting for your food to come, as "The Night They Drove Old Dixie Down" plays in the background, a most unusual but somehow perfect song for the moment.

The one I keep coming to though, is in the middle of the night of April 2006. I had picked up a couple friends, one seating in he backseat, let's just say his name is "Butters" for arguments sake, another in the front seat, we'll just call him "Dave" for arguments sake, it's 4am and we're heading to Las Vegas. We've already been up for three days straight at this point, and they start napping rather quickly on this drive. Me? I have a monster energy drink in one hand, the wheel in the other, and the Band on the radio and nothing else but my thoughts. There's nothing more Americana than a road trip, especially one to Vegas, and there's nothing more Americana than the Band to play on said trip. Here I was, on so many days without sleep, listening to those perfect notes as Helm sang "I pulled into Nazareth, feelin' about half past dead, I just need to find a place where I can rest my head," It was perfect. Almost as perfect as a few hours later when my ten-disc CD changer flipped over just as we arrived on the Vegas strip and Tom Petty and the Heartbreakers "American Girl" came blaring on my speakers, but that's another story... 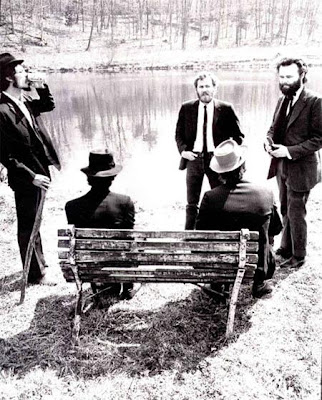 How the Arkansas born Levon Helm would ultimately make possibly the greatest of all Americana music with a group of guys from Canada, is anyone's guess. Helm and the "Hawks" got their start as a mere bar band, backing Ronnie Hawkins (the original and true "Hawk") before breaking off on their own as a bar band all their own, Levon & the Hawks. It was in 1965 the newly-electrified Bob Dylan saw this group perform in a bar in Canada and thought they had the chops to be their backing band. So much so that after just one show performing with him (a show in which only Robbie Robertson and Helm of the Band played in, as Al Kooper and other Dylan cronies had one show left in them) Dylan went to bat for them - big time. The Hawks got in quite a bit of trouble going across the border with a small bit of what the kids call weed. Dylan showed up to their court hearing and, being a celebrity with back to back top-10 radio smashes that previous summer, exclaimed how important the band was to his livelihood as both a recording artist and especially as a touring act. It got them off the hook, without ever having recorded in a studio once or even played a show as a full band backing for Dylan. Ultimately Helm would leave backing for Dylan early on, having a hard time dealing with the boo's and catcalls the old-school folk fans delivers at the shows. Helm would re-join his old mates in Woodstock, where he realized not only was Dylan on a roll, but the art of songwriting had been somehow opened to his old mates...in a big, big way. 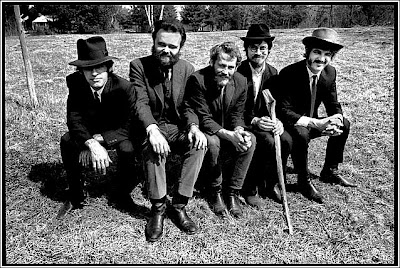 There was something in the water down in the basement of Big Pink in Woodstock, New York, 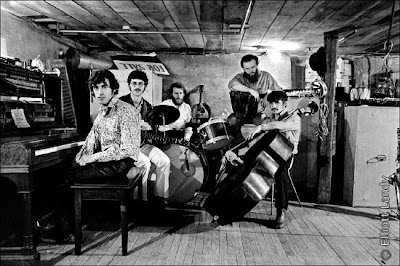 there had to be. From The Basement Tapes to Music from Big Pink, there's a specialness and uniqueness to the overall sound and lyrics of those albums I haven't found anywhere else - and that includes other records by those who recorded down there. They created some of the weirdest and greatest Americana music of all-time, much of which is still un-released officially. It shouldn't then come as a surprise that Helm's best work as a solo artist came when he started performing live and recording in that same town again, after initially beating his battle with throat cancer. The "Midnight Ramble" live shows he performed in his barn in Woodstock are now the stuff of legend, and the closest the outsiders who never got to see them (including yours truly) is on the 2008-recorded 2011-release Ramble at the Ryman, which wasn't even a "Midnight Ramble" but a tour stop at the Ryman Auditorium. 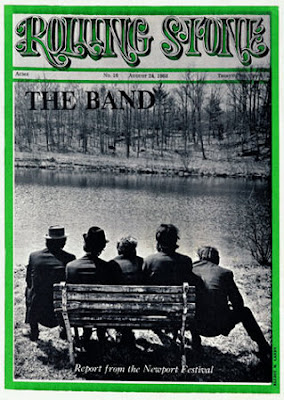 After an appearance backing Dylan at Woody Guthrie's memorial (Dylan's first live appearance since his infamous motorcycle accident) "The Band" as they had become known, because "that's what everyone called us," made it on their own, and most notably for Music from Big Pink and their sophomore effort The Band, are largely considered one of the most influential and greatest acts of the late-60's/early to mid-70's. How do you even begin to tackle the Civil War in a song like The Night they Drove Old Dixie Down? I won't even begin to question how to write something like The Weight or the brilliant booze and a good broad tale of Up on Cripple Creek. They are the closest thing America had to their own version of the Beatles, despite being 4/5 a Canadian act. Top to bottom, from the mathematical guitar genius of Robbie Robertson and his amazing, if not a little short lived, songwriting muse, the orgasmic organ genius of Garth Hudson, Rick Danko's thumping bass, Richard Manual's piano playing and falsetto voice, all backed by Levon's unique voice and steady drums. Just ask Mick Jagger, George Harrison and Eric Clapton how much they changed the music scene when they came about, they single-handedly killed the era of psychedelia and more-more-more-more studio sounds. After a few years in which they would release good but not great albums, truck through the (then) biggest tour of all-time, "Tour 74" with Dylan, The Band would ultimately disband after the greatest rock-n-roll concert of all time, put on film in Martin Scorsese's The Last Waltz. Helm would do some off-again on-again solo-releases (mostly forgettable) while making quite a name for himself as an actor, including in Coal Miners Daughter, which is somewhat ironic as he always claimed Robertson was the star-hungry one. 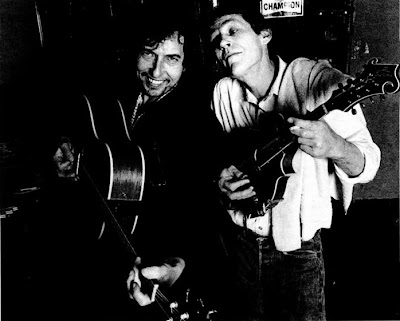 The Band re-formed sans-Robertson, and would become all but a bar band again, no one seemed to care anymore. One of my favorite stories is when Dylan heard they were in the same town they were performing in, he went over to the bar and hung out, and joined in. One of my cherished bootleg recordings. Richard Manual would hang himself in a hotel room, Rink Danko would pass about a decade later, and through it all Helm beat throat cancer and that's when the "Midnight Rambles" began. A number of Grammy-Award wins later, Helm has passed with a late-career legacy that includes Dirt Farmer and Electric Dirt, two of the finer releases from the decade. Those Grammy's must have been nothing in comparison with being able to make that music, on his own terms, and to make it with family and friends/collaborators such as Larry Campbell. 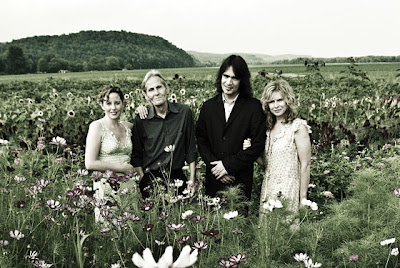 I now think back to the moment I first bought a Band CD, that moment in that Fry's Electronics where I talked myself into spending the $16.99 for its 18 songs. I wasn't even an over-whelming fanatical Dylan fan (yet), so it had nothing to do with their connection to him, but I just knew I wanted to hear their cover of Clarence 'Frogman' Henry's "Ain't Got no Home." From the opening notes of "The Weight" on that CD, a tale of making it into Nazareth half past dead, I was hooked. This music is in my blood, the lyrics in my mind, the stories and memories in my heart. The Band, and Helm in particular, they're my Beatles. Helm, the Band and their collective music forever have my ears, and will forever be in my heart. 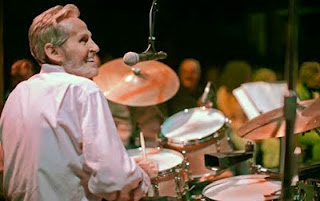 A few bits of this article appeared in my review of Helm's Ramble at the Ryman found HERE, To learn more about Helm and the Band, I highly suggest Helm's autobiography This Wheel's on Fire, in addition some good reading can be found in Across the Great Divide: The Band & America, Greil Marcus' unparalleled look into the Basement Tapes, The Weird Old America and finally the more recent Million Dollar Bash, a book yours truly was asked a few questions by the author for. More than that, buy the CD's, buy the vinyl, download the tunes, listen to whatever you can.
Posted by Hudson Hawk at 7:27 PM