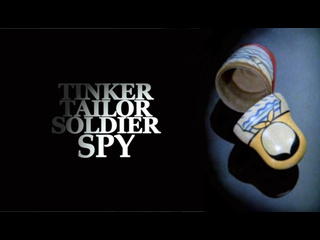 Tinker, tailor, soldier, sailor. Rich man, poor man, beggar man. These are words that have been echoing through my head for the past two days. After seven and a half hours worth of Tinker, Tailor adaptations I walk with my back against the wall, insistent on wearing an overcoat with an inside pocket. Anytime a coworker wants to sit down for lunch I make sure to scan the scene for any member of the opposition, looking for wayward stares and shaky waiters. I know somewhere, someone is watching me on the train as a I transcribe the various treasures I write for the Maus. Even now as I put the figurative pen to paper I know my fellow countryman with a kindle across the way so engrossed in whatever James Patterson has cooked up this time, is stealing looks downwards to my screen. I quickly shift away to some twitter feeds I've been working on, making sure whatever info he gathers is just chicken feed. In other words, I've begun to channel my inner Richard Burton as I try to wrap my head around two incredibly well made and acted adaptations of Le Carre's Tinker, Tailor, Soldier, Spy. 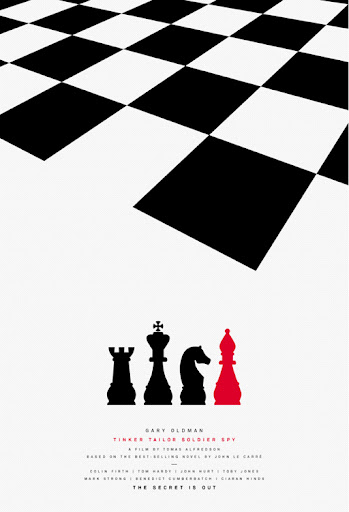 For those of you who don't remember I absolutely loved Alfredson's film, and while it didn't take the number one spot like it did for Manny, it made it into my top ten for the year with ease. Here are my original thoughts. But not all was fine in the land of Maus, there was cry that Alfredson had created a mere showcase for some fabulous performances. Our very own Tinker, Hawk, chastised the film for being uneven and incapable of handling the complexity of the story with such a short running time. Praising instead the BBC version with Alec Guinness starring as Smiley. With its elongated running time it allowed the characters to fully develop and give proper time to each subplot. I, of course, always one for some good comparative viewing was very excited to find the BBC version planned for release. So after rewatching the film I prepared myself for six episodes and five and half hours worth of cold war spy intrigue. After a marathon viewing session I have devoured both versions and like the story itself, nothing is as easily defined as good or bad.

I'm obviously going to make comparisons back and forth, but I'm going to try and keep the focus on the BBC version as much as possible. After all as a faithful reader you already know how I feel about the film version. So first off, I couldn't tell you which one I liked more. Beyond anything after spending so much time with the characters I am impossibly invested in their fictional lives. With so much more time in the BBC version we really get a chance to know our characters and dive deep into their state of mind. As great as Colin Firth was as Bill Haydon, Ian Richardson was an absolutely glorious drunk, far too intelligent for anyone but perhaps Smiley. He seemed as much in love with bucking the system as he was dedicated to the job, his smirks at any irreverence from Guillam were perfectly done in the background, and when you discover his try colors each laugh makes sense. This is really where the BBC version excels, you get to spend so much time with the characters that of course they become more defined. I want nothing more than to have a drink with Haydon while he schools me on the art of espionage and philandering. 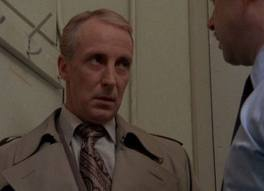 The story obviously travels on a similar trajectory, but the interpretations of character offer up some analytical gold. I mentioned Haydon up there and him and Smiley are probably the two that have the most similarities. Guillam and Tarr are actually quite similar to, straight down to Tarr's scruffy look and bomber jacket. The other three, Tinker, Soldier,and poor man are very interesting. Before we get to that, I want to say one thing for sure. JOHN HURT IS A BETTER CONTROL. Hands down, no argument. 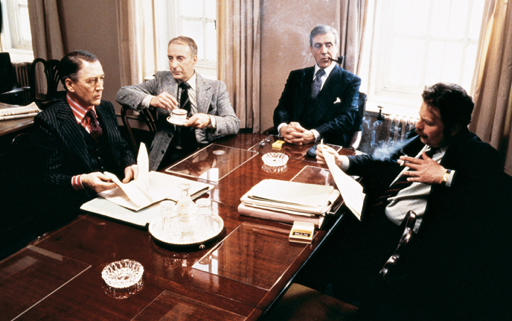 Ok so the other members of the circus get slight tweaks to their soul between versions. Percy Alleline, Tinker, is the man who takes over the circus once Control is ousted. He never should have a power of control, and he knows it. This is played up much more strongly in Alfredson's version. You get the sense he's in over his head and that he overcompensates for his lack of actual leadership. In the BBC version, his character is much more subtle, he is still played as the wrong person for the job, but there is no sense of incompetence. Toby Esterhase, Poor Man, is the ultimate worker bee. He blindly follows whoever he needs to to survive, his shifting alliances give him a sneaky sense of character, and in the Alfredson version he is definitely much slimier. In the BBC version he still has the lack of confidence that the other members have, but is played much more impotent than someone who follows whoever is in charge. Roy Bland, Soldier, is much more brutish, in the BBC version. Ciaran Hinds plays him as a more strong silent type, while in the BBC version he is definitely a warrior who has seen many battles, he isn't clean cut like the others and looks like he once had Tarr's position as a field agent. 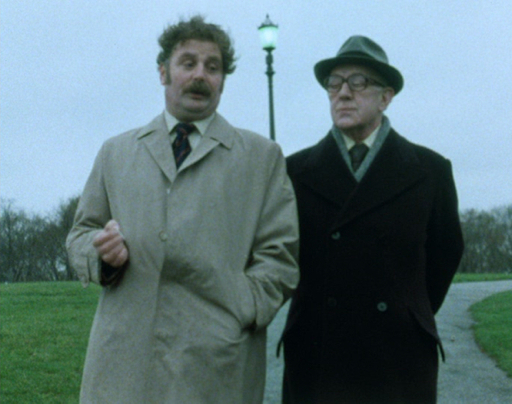 These little differences offer the most interesting comparisons between the two, while the plot really doesn't differ from version to version each act is given more depth and more explanation. Perhaps my favorite addition was the extended visits Smiley and Haydon have at the end. Seeing the verbal wordplay between them was one of my favorite parts of the Alfredson version so to have more of it was a real treat. This also yields more clarity on Bill's reasons for his actions, in fact he kind of explains his whole lacksadaisical approach to life. I love that Smiley continued to see him, leading up to his murder from Prideaux. Even the murder was far more intimate, no single tear this time but Jim gave him the honor of being up close and personal. 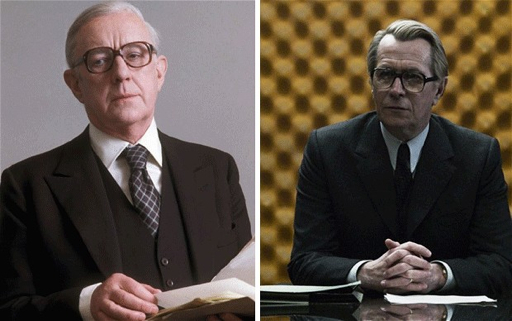 These are two wonderful adaptations and at the same time a great film and a great television show. They each represent brilliant examples of what their respective medium can achieve. I feel like I could write a whole series of articles comparing these two towering achievements. For now I am forever in love with this story and care about each of the characters whether they're Commisoner Gordon or Obi-Wan Kenobi. I don't think I could ever say who did a better job. Brilliant film, brilliant TV Series, and the kind I challenging narrative that demands your attention. Highly recommended. 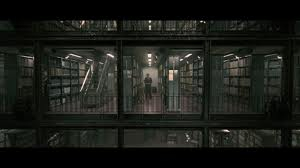 One last thought - both directors understanding the complexity of the plot would frame their characters in the middle of various maze like structures.