You are Right Mr. President, "Even you Can't Impress Him:" Bob Dylan is Awarded the Presidential Medal of Freedom 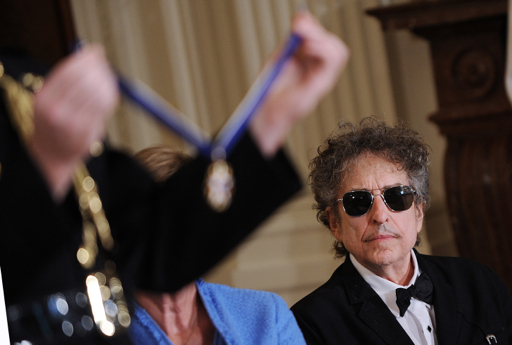 "There is not a bigger giant in the history of American music" prefaced President Barack Obama before he draped a Medal of Freedom on the shoulders of Robert Allen Zimmerman, a man more popularly known as Bob Dylan. While the words spoken by the president nearly encompass the impact of Dylan on American music (Folk, Popular, Blues, Country or otherwise), they are not wholly accurate. Within the realm of American music, Bob Dylan is a god. Anything praise less than this is blasphemy.

Even amongst the likes of an author, astronaut, Supreme Court justice and the coach of a female basketball team (among others), Bob Dylan rendered all of them as mere mortals in his wake. Certainly, they have each had their own accomplishments but Dylan's long after you or I are gone. In all seriousness, I am kind of surprised that he has not received a Medal of Freedom prior to today. In his fifty years performing, no one has had a greater impact on American popular culture (be it literature, music or otherwise) than Dylan and his collective body of work (which will be forever unparalleled) warrants having three or four of these medals (at least). It goes without saying that I have the utmost admiration and respect for Dylan... Who am I kidding, I love the man, who even at the age of seventy-one is still the epitome of cool. He is the only person that I can think of who approaches the meeting the leader of the free world as merely a pedestrian afternoon. Having watched the video of the ceremony (a couple times), you could make the argument that he is "over" it and could have cared less about receiving this prestigious honor. I would give a penny (more than that actually) to get a glimpse into what he was thinking during that time since his face was not betraying a thing.

Having said all of this, I doff my cap to you, Bob Dylan. The most minor of your accomplishments warrants a medal of freedom. Congratulations on a job well done, you earned it. I would add: Do not rest on your laurels but you and both know that would never happen.
Posted by Manfred "Manny" Funkowitz at 8:43 PM