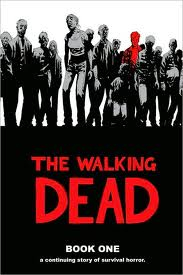 It is hard to believe that it has been seven years since I first picked up a copy of The Walking Dead. While, I have never been a huge fan of Robert Kirkman's (Sentiment explained by such material as Marvel's Zombies), I do concede that he has created a classic in the modern age of comic While most know the series from the television adaptation airing on AMC, hopefully, it will point them in the direction of their local seller of comics.

It is unfortunate that it has taken six years to return to this series but being a starving student and a self-imposed abstention towards comic books are to blame for that. Of course, it completely fair to say that the conclusion of the television adaption second season played a role in my dusting off the hardcover volume on my book shelf. What I read promptly lead me to purchasing volumes three, four and five. For a man who does not make rash or seat of the pants decisions, this speaks volumes about the series' level of quality.

The world in which The Walking Dead inhabits is a multi-faceted one. Certainly, the idea of a Zombie epidemic (and seemingly pandemic) is an absurd one. However, how the series handles the deterioration of civilization is an accurate assessment of how the government responds to such crises. I mentioned earlier that it has been seven years since I first picked up a trade, I am not surprised that series is still chugging considering the wealth of stories that can take place in this world.
Inevitably, the discussion turns to how does the comic compare to the television.

Much like recent adaptions of literary works (case in point: Game of Thrones), they are two different animals. Sure, there are similarities in the realm of characters and elements of the plot but a lot of the show does not take place in the comics. This has not soured my opinion of the television but the comic is far more compelling in my opinion. For those interested, this twelve issue volume encompasses the first two seasons of the television show. Ultimately, the comic (much like the show) leaves the reader wanting to know where it is gonna go from here and how that is going to impact the characters that you grow to care about in these initial twelve issues.
Posted by Manfred "Manny" Funkowitz at 12:00 AM