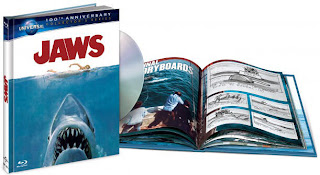 I had a talk with Bence some months back where I mentioned how you never stop loving Spielberg, but at a certain point, if you start to dig deeper into film, you outgrow him in a way. That being said, Jaws is on a short list of two or three films can be considered the core as to why I do what I do for a living. It's also on the short list of films I was truly excited about the blu-ray format for, and today is that day...so let's dig in.... 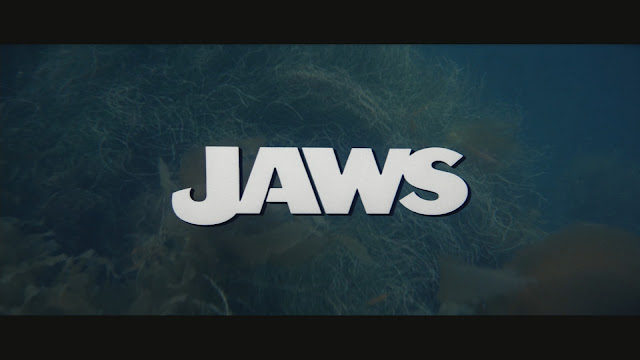 Can we go home now? 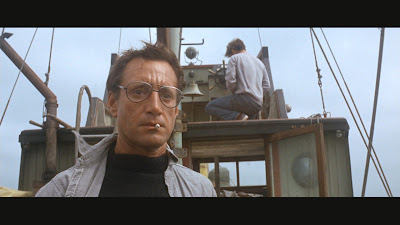 Personal Bias/Quasi-Film Review: I don't know what is was that got me so obsessed as a seven year old to see Jaws. It could have been any number of things: maybe a mention in a book or  something I heard at school. Whatever the reason was, I do remember becoming obsessed with seeing that film, even to the point of making my Dad pretend we were being chased by a shark and climbing up a tree in a park for safety. We were, after all, a good six hour drive away from a ocean. My Mom took a few days mini-vacation that winter to go see her sister and some family and that same night my Dad took us to the local blockbuster (remember that kids? When the film rental business meant supplying jobs and actual choices?) and upon seeing the film was rated only PG (and Mom was out of town after all) he allowed me to rent it. I don't think it's possible for a movie to make me more scared or happy at the same time. It still scares me, I'm serious. I don't shower because Jaws. Okay, that might be a stretch, but just as Richard Dreyfus' character describes a great white as a "perfect machine," he could have been describing the film itself: All it did was swim around to different theaters (and later to various home video formats) eating peoples money and leaving it's offspring: undeserving sequels, video games, lunch boxes, theme park rides and more. Jaws changed the movie industry, and to a lesser effect on this world, it changed my life. It's as perfect as an over-the-top summer blockbuster before there were summer blockbuster fish out of water (by placing a city cop IN water) story could ever be. 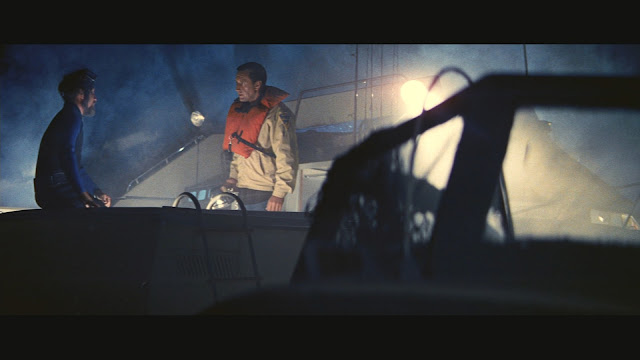 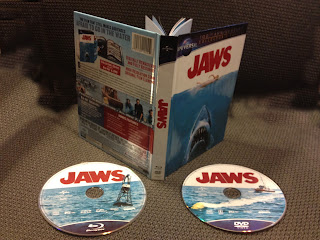 Aesthetically speaking: Jaws arrives, like a handful of other recent Universal "100th Anniversary" special releases, in two formats: a Blu-Ray/DVD combo pack with slipcover (featuring on opening flap!) that you can find anywhere. The other, that I opted for, is the Best Buy exclusive Digibook: Similar it is a Blu-Ray/DVD combo pack, however the discs are not the generic logo and semi-clear discs but full color designed discs, all packaged in a beautiful gloss-finished digibook package that features behind the scenes still photos, cast and crew bios, info into all aspects of the creation of the film, storyboards and more. A fantastic package that Universal deserves mad props for delivering. The main menu, like all of Universal releases, is the same generic menu layout only changing it's background video and audio for the specific release. 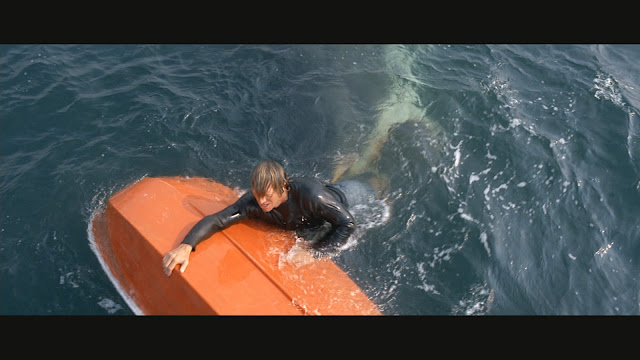 My favorite scene/shot/scare in the film. This scene is also an excellent visual representation of what happens to your career when you piss of Spielberg ala Shia LaDouche. 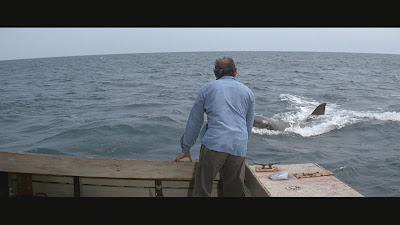 Visually Speaking: As someone who owned and or viewed Jaws on VHS, laserdisc, DVD, TV (in SD & HD feeds), this Blu-Ray transfer is a sight to behold for those of us used to the green tint that used to plague so many shots, or being forced to view the film in chopped off 4:3 "full-screen" formats. The mid-70's film stock isn't exactly renowned for its clarity or color representations, and the original film print for Jaws after all these years, in the words of Spielberg himself, was "pretty crummy." Universal, who has had it's share of criticisms in past years for their catalogue title blu releases, has gone the extra mile in not just remastering this film, but going through a full restore, starting with a 4K scan of the negative through a liquid gate process. There are those armchair video quarterbacks who would't know what it takes to author a blu or DVD if it smacked them in the face, who say some stupid things. Things like (from a Jaws release forum) "I hope it's a AVC and not crappy VC-1 encode!" not realizing that VC-1, like AVC, is a MPEG-4 intraframe codec capable of beautiful high bitrate images like Inception's or The Dark Knight's blu transfers. The other complaint used for, well, everything, is "DNR" or digital noise reduction. These same people who complain about DNR rave for Criterion releases, which yes, use DNR, a necessary component in creating a fain grain transfer out of a movie shot on 35mm film. Can DNR be over-used? Sure, just ask Predator about that. All my complaining aside, my point? Well, my point is those complainers have nothing to complain about: This is a 30MBps AVC codec in the films original 2.35:1 anamorphic aspect ratio and there is a nice fine grain to this film (more-so in night scenes or those sea shots with lots of sky) so anyone worried about "wax face syndrome" should breathe a sigh of relief. Spielberg himself approved of the final color timing of the film, which as I said, shows no signs of the overly dark, green tinted images of Jaws home releases of past. My richest memories of Jaws are from VHS: crappy, noisy, 2:3 "progressively interlaced" pan and scanned VHS. Seeing the film in 1080P with this attention to color and detail despite the 70's film stock source problems or sometimes very noticeable chromatic aberration (especially on underwater photography), is an eye opener and I'm glad to say the frame by frame restoration is a definite success. 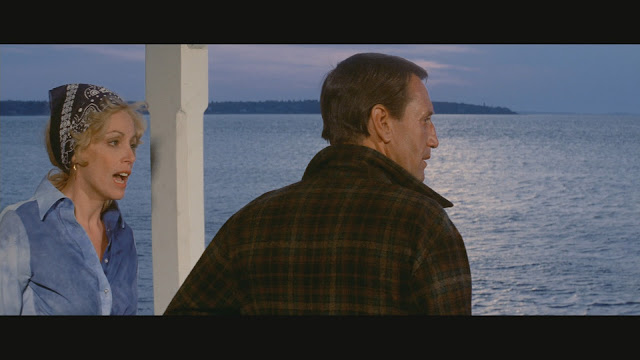 The best part of having read Jaws the actual book? Knowing why Chief was really so uptight all the time: His old lady was shagging Matt Hooper from the oceanographic institute... 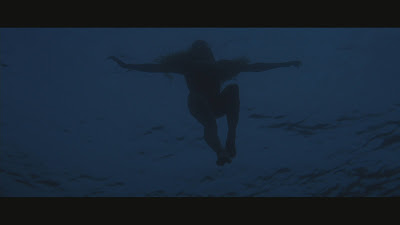 Speaking of Sound: As I get older, I think what scared me more than anything on this film is John Williams score. Everyone now knows the story of how Spielberg laughed when Williams first played him his idea for the score on piano. Spielberg expected a rousing, deep pirate movie score and Williams felt that wasn't the movie he watched. The whiners once again will have to shut up, because the sound is an overall success too. The problems inherited by the 5.1 "up-mix" from the DVD a few years back aren't really problems here, and yes, the dinosaur scream and dynamite sounds from the films climax are still in there. Film purists will be glad the mono track is included, though it's a lossless 768kbps track as compared to the 7.1's massively awesome 4.9MBps track. overall the 7.1 mix isn't perfect (the use of back speakers is bit much for the outdoor scenes as compared to most newer films) but it definitely adds a whole new element to enjoying the film, and overall does a good job in it's separations and the mix of both really high and low ends will make many audiophiles happy.

A/V Bitrates: As mentioned, the video is a AVC variable bitrate that averages to about 30, the audio is a massive 7.1 track coming in just under 5MBps, with the mono coming in just over 750kbps. The film is presented in the 2.35:1 anamorphic aspect ratio that will see widescreen televisions having black bars at the top and bottom of the film. 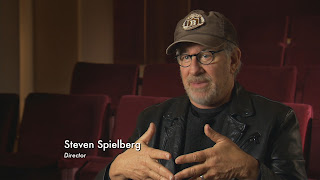 Bonus Goodies: Universal brought it to the table with this one, with the only complaint is not a lot of the extras are in HD, but they are here in bucketful's:

Making of Jaws (2 Hours - SD) - It's getting a bit dated now, and anyone who had the 25th anniversary DVD will remember it, but it's still an excellent look into the making of the film.
The Shark is Still Working (100 mins - SD) - Almost a myth, this documentary put together a few years back was rumored to having been turned down by Universal when offered to be on a future Jaws home video release. Thankfully that was just a rumor or they changed their minds. It's not "all new" as the box reads, but is a few years old, but a great doc that thankfully has it's place here on this Blu-Ray
Jaws: the Restoration (8 mins - HD) - Pieces of this little piece have made their way online in hype for the release, but it's a quick, though still in-depth look into just how much went into restoring the film. Anyone who doubts the importance of post-production, even after editing is complete, should watch it.
Deleted Scenes & Outtakes (15 mins) - You've seen them before, see them again!
From the Set (9 mins in SD) - A vintage documentary thats worth a view just to make fun of how dorky Spielberg could look in those days.
Plus Trailers, Archives, the DVD copy and UltraViolet. 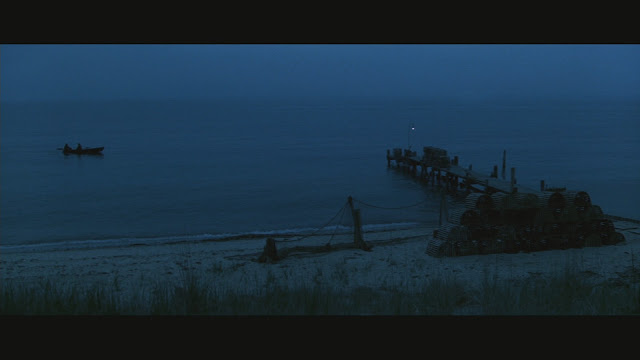 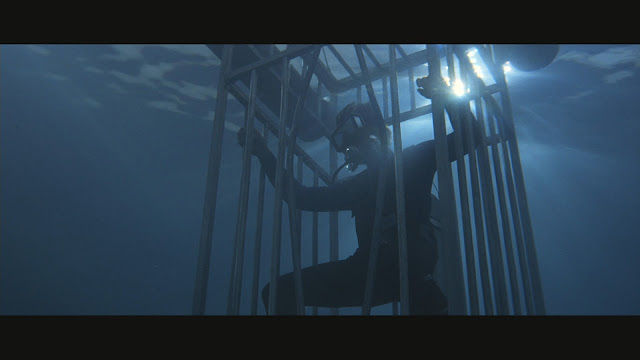 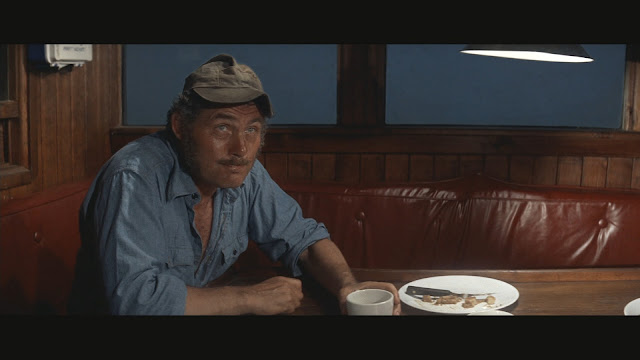 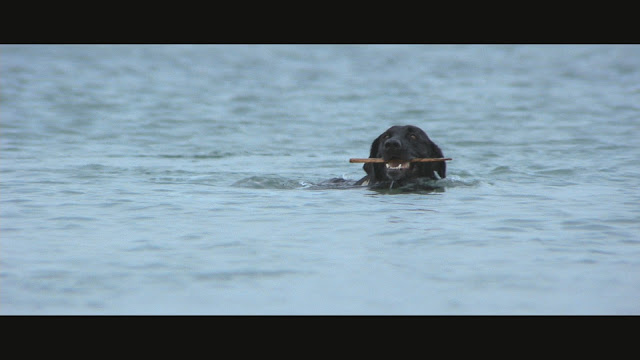 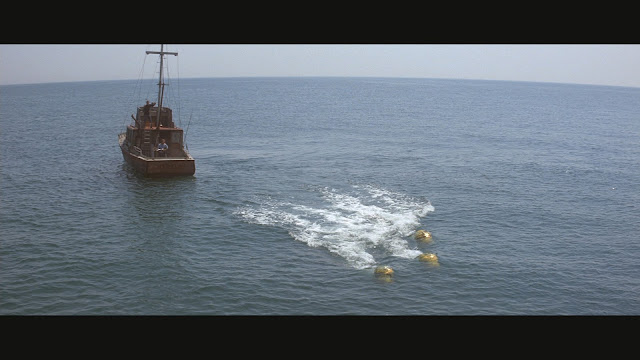 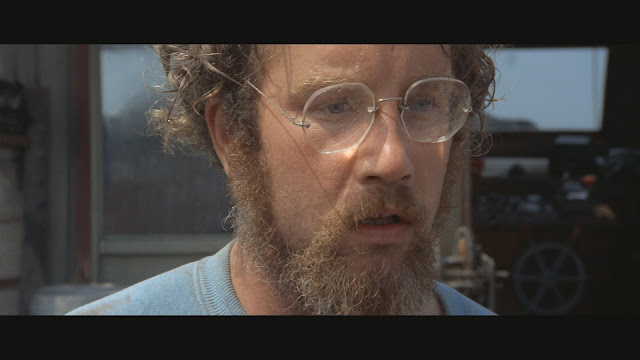