"War makes monsters of us all:" A Feast For Crows

PORTEmaus Literature Society No. Fourteen: A Feast For Crows

*Editors note: I am getting close to catching up. -Manny 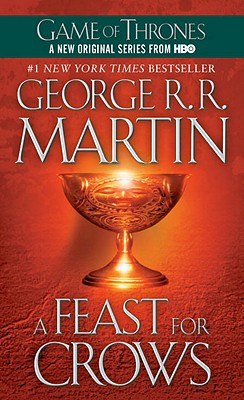 A Feast For Crows

It is high time that we returned to the literary world of Westeros. I must admit this book took much longer to read than its predecessors, which is odd because it is shorter than those novels. I had some hesitation before cracking the spine of this book after reading the reviews on this novel prior to reading Game of Thrones. Having finished the it is clear why A Feast For Crows is a controversial novel for fans of this series. Certainly, this is a valid position, yet, I do not feel that such vitriol is warranted and I (kind of) understand what George R.R. Martin was trying to do (even if it did rob fans of a novel).

It is completely understandable that he split book four into two novels, A Feast For Crows and A Dance With Dragons since both the page count and point of view characters have become unwieldy. However, to end A Storm of Swords on such a cliffhanger and begin book four with a character that nobody knows was foolish. Furthermore, to not include the best character who was the focal point of that cliffhanger at all was frustrating. To be fair, George R.R. Martin addresses this with a note at the end of the novel but it is too little too late.

That is not to say that A Feast For Crows is a bad novel. There is not much to complain about in the realm of story, it is more a failure in execution. Once you get over the fact that the novel was split, you have to address that the first part of the novel was downright dull. To be honest, I am completely ok with this since Game of Thrones was pretty slow-moving in the first few chapters. Once Martin gets everything sorted out and the plot takes shape, you cannot put the book down. It is that good and because book was split, the reader knows that they are in for another exciting (but frustrating) cliffhanger. Which given the low key and sloth like progress in the beginning, you kind wish that Martin had not spent so much energy on the buildup. Of course, since Martin split the book, as a reader, I become more interested in the plot lines that I just read and less in the story lines that neglected by not keeping the manuscript intact.

For most readers of the series, you have to select which House to align yourself in a sense and this directly impacts how you receive certain characters. For instance, since I (like most fans) am a follower of House Stark than I pretty much dislike all of the members of House Lannister save for Tyrion (who simply transcends his association with this house by birth. In this novel, Martin does the unthinkable, he is able to illustrate a dynamic change to a character that you would have thought impossible. The result is a different character that makes regret hating him for several thousand pages worth of text. Conversely, he also takes a member of this House, Queen Cersei and makes her a more despicable character than she was win the novel began. Granted, this reinforces the frustration that results because of the cliffhanger. In the end, I think A Feast For Crows is a pretty good novel (which runs contrary to the sentiment of most fans). Sure, it was slow moving in the beginning but once the plot gets going (For the B-side characters that it follows), it is damn good.

Parting Thoughts:
I definitely understand why these same fans were pissed off about this novel and the fifth book. When you have a excitable group of fans, you cannot tell them that you split the book and promise them that the book will be there within the next year... Only to deliver it six years later. We will see if that wait was worth it.

Posted by Manfred "Manny" Funkowitz at 11:02 AM

Email ThisBlogThis!Share to TwitterShare to FacebookShare to Pinterest
Labels: A Dance With Dragons, A Feast For Crows, A Storm of Swords, Game of Thrones, George R.R. Martin, House Lannister, House Stark