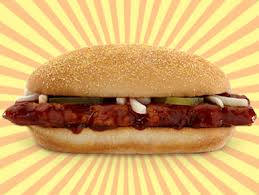 The world as we know it is set to end this Friday because an ancient civilization said so. With that being said, it is time to put on your best hobo garb, grown out that beard and spray yourself with animal urine... We are going to the street corner to yell incoherently. Now, where did I put that grammatical incorrect homemade sign?

One sign that has been overlooked by practically everyone, historians, naysayers and your run if the mill doomsday fanatics is the return of the McRib. Born from the minds of McDonalds' Reconstructed Meat Technologists to champion the cause of obesity, diabetes and clogged arteries in America, the McRib is an elusive piece of American fast food culture.

What better way to herald the doom of all of Earth's species than by it magically re-surfacing four days before the end of the world. It seems that the McRib has replaced death as one of the four horseman of the Apocalypse. I do hope that this conjures the imagery of a sandwich riding a flying horse (with a scythe) because it did for me but I digress. So, as you lay that first bite into your McRib, just know that this was one of the major signs that the Mayans prophesied regarding the fate of our world.

Addendum: It should be mentioned that McDonald's pushed its return from October/ November to December. Coincidence? I think not.

Posted by Manfred "Manny" Funkowitz at 8:37 AM