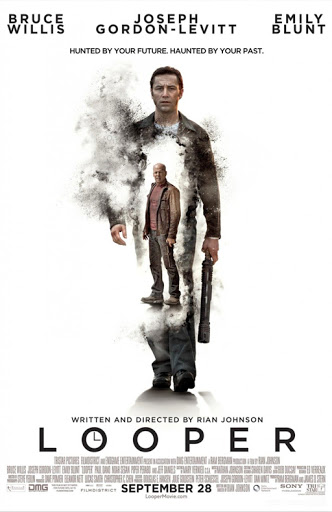 Looper
There were only four films in 2012 that truly had me on pins and needles to see. First was Dark Knight Rises, Prometheus, Skyfall and finally, Looper. Sure, 2012 had many other great films but these were must sees. After watching the first three, I was very hopeful regarding the quality of the film. Little did I know about how good this film was. This was not surprising considering the quality of Rian Johnson's films to this point, but moreso because the difficult in writing around the concept of time travel.
Looper is the tale of Joseph Simmons, a man paid by the mafia in the future to kill and dispose of victims in the past. This continues until Simmons is tasked to kill his future self and close the "loop." The future Simmons reeling from the loss of his wife seeks to alter the past by killing the man responsible for closing the loops. This act ultimately resulted in the murder of his wife in front of him.
Time travel in many ways is one of the hardest things to write about. Simply, it (as a narrative device) works well or simply falls apart. Looper utilizes time travel as an essential but mostly secondary element. What stands out (to me) about this film, is the stark contrast between the versions of Joseph Simmons. Johnson literally plays out the notion (or more importantly, folly) of what you would say to your past self. Even with the "advanced" knowledge of the future, it is not enough to alter the past. In many ways, it answers the renders the question of altering a person's own past moot since importance of events is only relevant to the present time in one's life.
That is what makes Looper such an intriguing film. We are not the same person that we were in the past, nor will we be the same as our future self. This apparent dichotomy of Joseph Simmons is an added dimension to a sub-genre of science fiction that has become relatively one dimensional. Moreover, this is highlighted by the direct interaction of the past and future versions of character. By violating this fundamental rule of time travel, Johnson makes arguably one of the most interesting takes on the classic conflict of man versus self.

Parting thoughts:
A tip of the hat to Joseph Gordon-Levitt.
Posted by Manfred "Manny" Funkowitz at 9:40 AM