If the President fills out a bracket does anyone care? I hear it means four more weeks of winter." 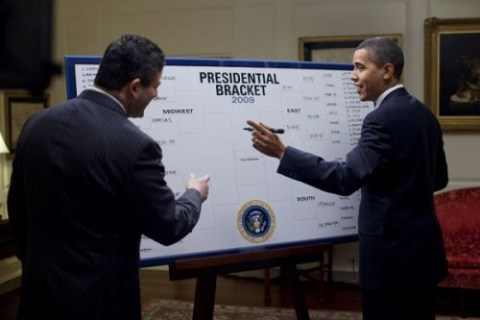 I have said it before: is there anything more worthless than March Madness? Thank you, smelly guy who walked up to me at the water cooler to talk about your broken bracket. Sorry, you lost your five dollar buy-in because Western Pensacola Community College lost to the National Liberal Arts College of Southeast Virginia in the first round. That is a national tragedy on par with nuclear war. Pardon? Neither of those schools exist... Sorry, I stopped listening to you midway through the word, March.

Seriously, I would pay for any explanation for why I should care that my alma maters (yes, I have multiple) are playing in a tournament that contains sixty percent of all division I college basketball teams. I do not see why people get worked up to watch college forward pass it to college point guard, who goes for the easy layup. I mean, thankfully, the activity of bracketing has not permeated all areas of American life. After all, it is not like people are spending business hours on perfecting the pointing act of picking teams to win. After all, there is more important things that need to be addressed.

At least the President steered clear of the seduction of the Devil's tournament known as March Madness unlike last year. Wait... Wait, he did a bracket this year? Are you kidding me (flings chair across room)! When did he find time to do this? I thought he was busy with dealing the nuclear armed despot pissing his pants in anger or the continuous financial difficulties of the United States. How about tackling the intellectual and cultural decline of the United States? I guess some various under-secretary of (insert department name here) will handle it, you had some bracketing to do. Well, good luck... I hope Louisville takes the triple crown net or whatever they win in this tournament of peasants and kings. Strike that.

... Drops microphone and walks off stage.