“Most people don't believe something can happen until it already has. That's not stupidity or weakness, that's just human nature:" World War Z 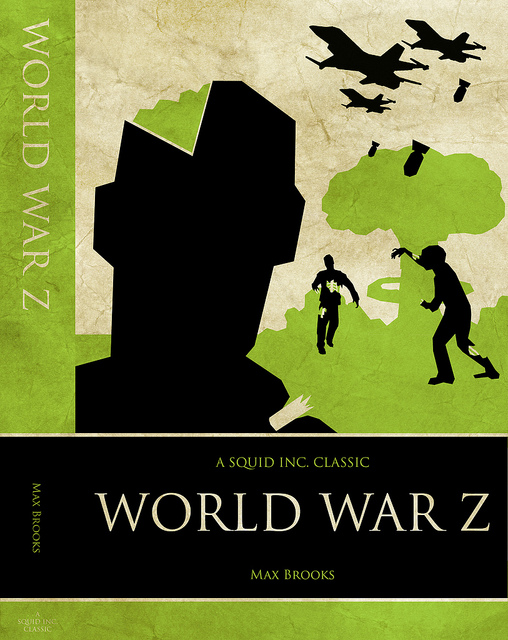 I will be honest, outside of The Walking Dead trades, there is not much in the realm of Zombie fiction that I would willing to read. Frankly, I think that zombies (like the popularity of vampires from yesteryear) are becoming slightly overused in books, television and film. Seriously, is there any reason why I was forced to sit through Warm Bodies? I digress. I first came across the book while shelving books at the local library and in pure Funkowitz fashion, I passed on reading it because I was too "good" for it. It was until I came across a copy that described Max Brooks as "the Studs Terkel of zombie journalism" that I decided to give it a shot. Around that time, the movie that bears its name but little of its plot was coming out and I had time to kill during a week in San Antonio.


The narrative structure of World War Z is that of an interview. The narrator seeks to present the experiences of the interviewee in an pure manner with subtle points or questions that he speculates the reader would naturally ask. The average account of a character in this book is roughly three to five pages. This plays to the benefit of the reader as it minimizes the mental exhaustion of spending time with characters that you might not want to read about. This is highlighted during the down pilot chapter, which was too long and frankly, not at all interesting or exciting. Conversely, this book contains numerous compelling chapters that are far to short and would have been interesting to flesh out. Yet, it is understandable why those stories were so short.

World War Z is an easy read as I read most of it during a short redeye flight and this should not be construed as a bad thing. It is a very accessible book, whose strengths do not lay with the zombie elements but more with its description of societal collapse in the face of global pandemic, the response and subsequent rebuilding period. Throughout the course of this book, the idea that stood out to me was that this book would make a solid episodic drama. After all the foundation was laid with the book and each episode could focus on new person's experience each week. Hey, Hollywood producers, make it happen... I did all the work for you and expect a producing credit.

Digression aside, World War Z was a satisfying read, most importantly, it provided a new take on the genre by placing the societal effects at the forefront as a historical document. This manner of presentation will not be found in the genre, as it emphasizes a global environment and makes a conscious effort to not isolate its characters as other zombie works tend to do. In all, you would be doing yourself a favor to check this out and then check out Studs Terkel's "The Good War": An Oral History of World War Two" and compare... Who knows, there might be some crossover there. I will be honest, there probably won't be any.
Posted by Manfred "Manny" Funkowitz at 12:57 AM