Did you hear the news? Of course you did! No, I am not talking about the purported use of chemical weapons in Syria or Ruth Bader Ginsburg officiating a same-sex marriage in Washington D.C. (What, was Scalia busy?) tomorrow. I am referring to something much worse and more newsworthy than anything else on the Interweb these days (Which I hope that Miley Cyrus does not detract from its perpetual relevance). Warner Bros. has selected Ben Affleck to be Batman in Zach Snyder's sequel to the mediocre Superman reboot, Man of Steel. Rabble rabble... Won't somebody think of the children!... Rabble rabble. You know, I am still perplexed why didn't they ask Clooney to come back, that would surely quell any animosity that the fan boys would have to this upcoming film, right? 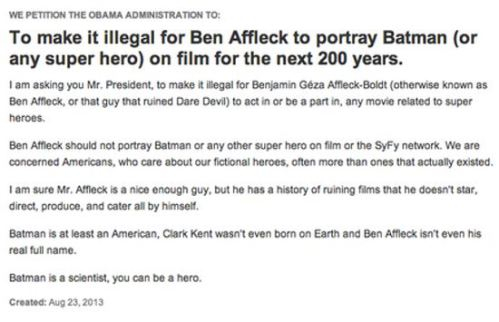 I am going to be honest, I could give two (spoiler: curse word coming) shits about this casting decision. Do not get me wrong, I love Batman and I have indoctrinated my children into loving Batman... But, I am too burnt out by superhero movies to care at this point. Has Affleck come a long way from the being the "go to" guy for spending all of his on-screen time mouth breathing? Probably. Should he be Batman? Probably not. Does that mean you need to put your life on hold to start a "We The People" petition to force the Obama Administration to intervene and forcefully remove Ben Affleck from the cast? Um... Seriously? Evidently, it does as some busy body... Wait, let's call him what he or she is, a patriot. This patriot sacrificed the time needed to create a petition that would ultimately waste the time of the Executive Branch to remove it. Which they did. Time which could be better spent devising a response to... Oh, I do not know, Syria or literally, anything else.

It makes one wonder what these people could accomplish if they pooled their collective mental capabilities. They could put a man on Mars, create an electronic vehicle that goes two hundred miles on a single charge or spend the four minutes necessary to vote for competent political leadership. Such a display highlight two things:

1) The American public really has its priorities skewed and should re-evaluate the things that they find to be important. (Ex. Ben Affleck as Batman = NOT Important... Important items should include things that you can change or control.)

2) The "We The People" website was a horrible idea. In fact, the staffer who suggested it should be relieved of his responsibilities immediately. Who thought this website would be used seriously? It really shows a disconnect in understanding the current state of the American public.

All digressions aside, the decision was made that Affleck would be Batman and that is not going to change. Not matter how much bitching, moaning or pants wetting occurs on the Internet. After all, given Zach Snyder's cinematic track record, the movie will probably stink regardless of who dons the cape and cowl. So, why not put your efforts elsewhere, go plant a tree, push a wheel down the road with a stick or effect positive change in your community. What do I know, I just wrote a post complaining about foolish people on the Internet. Sigh...