Arizona needs a motto... Sadly, this makes me so angry that I cannot think of one. 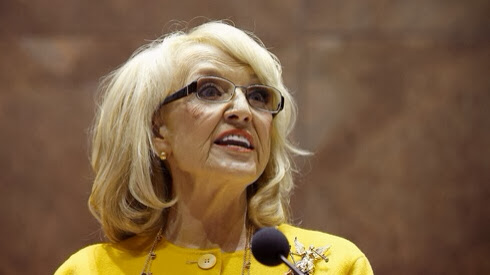 *I suppose that I should preface that this post might contain language unsuitable for children or those faint of heart. Reader Discretion is advised.

Oh,where to begin. Remember when Arizona was not a punchline politically? Well, I don't. At some point, this state decided it would go blow for blow with Texas in the realm of crazy and then raised the ante. First, it passed a law that allowed individuals to be targeted because of the color of their skin. The state of Arizona felt that it needed to delve further into the realm of bat shit crazy with the passage of SB 1062.

"Exercise of religion" means the PRACTICE OR OBSERVANCE OF RELIGION, INCLUDING THE ability to act or refusal to act in a manner substantially motivated by a religious belief whether or not the exercise is compulsory or central to a larger system of religious belief."

You are shitting me that this was passed by legislators in America. Seriously, did the state legislators study abroad in Tehran? The fact that this ever came up for a vote is disgusting and those who voted "aye" should be ashamed of themselves. You are not only a detriment to the religion that you seek to protect (What happened to love thy neighbor or treat those as you want to be treated... Fell on deaf ears, eh?)
but you are also the weakest example of responsible politics.

You are a gaggle of dense monsters that fail to realize that freedom of religion and the rights inherent to it are protected by the first amendment... Thus, this bill is not only irrelevant, it only serves a single purpose. Hopefully, they various constituencies wake up and vote against those who devised, put forth and voted for this appalling piece of legislation.

Posted by Manfred "Manny" Funkowitz at 8:17 AM