Hark! Is Thoust Prepared for the Gubernatorial Conquest of one, Steven Seagal? 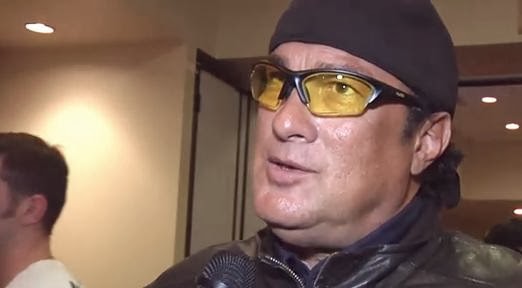 So, there is a rumor around these parts that Arizona is hoping to get one of those fancy "celebrity" governors. Really. Of all of the "celebrities" that live in Arizona, the best of who would be willing to run is Steven Seagal. A guy whose idea of a fun thing to do on a Saturday night is to call up Joe Arpaio to see what the action is on the border. Yeah, he would be a great governor, I foresee Arpaio getting a second tank and a border fence that seeks to touch the blue Arizona sky.

They say that Seagal was merely joking about the possibility of him karate chopping his way to the governorship. Guffaw! Good show, old bean. Ripping good time. Bully! I can barely contain myself! Oh dear, my top hat and monocle have fallen off me head and face! Me thinks this was Seagal's way of dipping his fat toe in the tepid water that is Arizona's political waters. As if the political situation in the state was not already considered a joke with the participating politicians collectively known as a laughing stock, the concept of a F-list celebrity might be considered humorous.

Perhaps, I have lost my sense of humor or maybe it is the fear that he might garner a vote of two. I cannot fathom anything worse than a Governor Seagal... Well, maybe the return of the woman affectionately known as Skeletor. God willingly, neither will happen but then again, Arizona is not known for its wise and calculated political decisions.
Posted by Manfred "Manny" Funkowitz at 6:30 PM