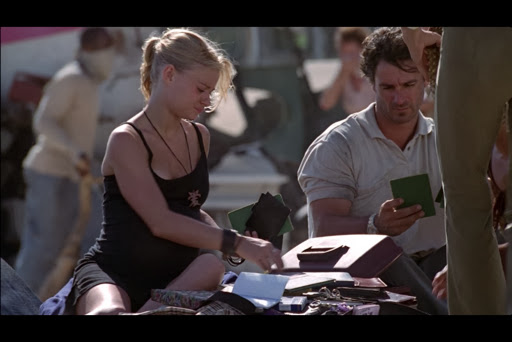 It's crazy watching these first few episodes and seeing the survivors deal with the immediate aftermath of the crash. Dealing with day to day issues like food and water or rotting bodies. Stuff that definitely fell by the wayside to give way to time travel, battles of good and evil and some temples and demigods. That's why I picked this picture. The entire scene is a slow pan across the remains of the wreckage as people sift through the chaos looking aimlessly for anything that will help in survival.

This picture shows Claire and some people, who probably die faceless deaths, sifting through the personal belongings of people on the plane. After digging through the possessions that defined so many people now dead she has the idea to hold a memorial service. In this first season I love that so much focus is on how to maintain a sense of civilization and society with the other side constantly pulling our heroes into survival mode bringing them down to a primal state of survival of the fittest. Never forget this show, with all it's brilliant mythology, has always been about the characters and their journey on the island.

One last thought - how about that Bad Twin tho?