New Tune Tuesday: From Tape Reels to a Box Set to Your Ears, Mike Bloomfield gets his due

I can't count the times I've had the "personal 5 greatest guitar players of all time" conversation with people. In record stores...in a car as some CD plays underneath our words...at concerts...in my head with different voices taking different sides. They all do share one common end: when the other person in the conversation gets past their #4 I jump in for them, "the person you're trying to think of is Mike Bloomfield." Then they give me an odd look, "who?" These same people who would froth at the mouth at the mere mention of Hendrix (you can see him smiling and nodding at Bloomfield's playing in DA Pennebaker's The Complete Monterey Pop Festival set), Brian Jones, Jeff Beck, Eric Clapton (who once said "Mike Bloomfield is music on two legs") and others, giving them credit for knowledge of the blues amongst the earlobe masses of youngsters in the 1960's, didn't know Mike Bloomfield.  Even as I read a great article on this box set for Guitar Magazine, they still found an excuse to put Eric Clapton the cover. So I'm here to review the first career retrospective of Mike Bloomfield: The first guitarist to actually show us the ghost of Robert Johnson still lived on in recording studios in rock music's greatest, or at least most prolific, decade. Decades after his untimely death, his sweet blues get their due...

When Mike Bloomfield plays before a black audience, his sh*t's gonna come out black...You could put Mike Bloolmfield with James Brown and he'd be a mother**ker
~Miles Davis~ 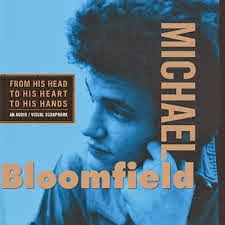 Michael Bloomfield: From his Head to his Heart to his Hands - 3CD/1DVD [Sony/Legacy]
It's 1965, folk rock is quickly becoming "a thing." An early 20's musician from middle class upbringings, rocking a Jew fro, walks the streets of New York City into Columbia's most hollowed grounds: Studio A. He would proceed to be an integral part of the most influential track of it's time, "Like a Rolling Stone." The man I'm referring to isn't Bob Dylan (there's your Dylan reference Bence), but the man who played the unique, almost country blues licks that drove that song behind Al Kooper's organ and the La Bamba rhythm. Mike Bloomfield. At 22 he had come from a middle class upbringing into a love of the blues that brought him into Chicago. Where he played  and hung (even babysitting Muddy Waters kids) alongside the greatest blues players and singers the city had to offer. In 1963 when Bob Dylan came into town to play a gig, Bloomfield went to go rip him for his playing, yet the two became fast friends, charmed with each others wit and intelligence. It was about a year later he was offered a tryout with Columbia's talent scout king, John Hammond, which is where this box set starts...

I've heard people who can copy the licks of Clapton or Hendrix, and also sound like them. But I've never heard anyone who can actually sound LIKE Mike Bloomfield, this set reminds one of that. Nicely mastered by Kooper himself, the box set isn't the greatest dynamic range a box set has ever had, but remembering a lot of the rudimentary sources for some of these tracks, all in all, this box is a treasure. We begin with 3 tracks from Bloomfield's tryout for master talent scout John Hammond, in these 3 tracks we get an idea of what Bloomfield can do: from Robert Johnson inspired country blues to Merle Travis style picking...and he does them WELL. Just listen to Hammond's comments over the PA at the end of track 3, "We've explained you enough, I'm signing you!"

The first disc continues on through some of Hammond's earliest try's of getting some Bloomfield tracks cut with Chicago cats to some unreleased material from his time with Dylan in the studio in '65. As I mentioned, they had become acquaintances in 1963 and when Dylan needed an electric guitarist for "Like a Rolling Stone" and the subsequent Highway 61 Revisited sessions, he immediately remembered Bloomfield who had been signed by Columbia a year earlier. We get an instrumental of "Like a Rolling Stone," which Kooper re-mixed from multi-tracks (turning down his own organ, what a nice guy!) to highlight not only Bloomfield's playing, but the drumming and especially I have to say piano playing of Paul Griffin (Griffin was the highlight of Blonde on Blonde's "Sooner or Later" as well). We also get an alternate version of "Tombstone Blues" featuring Chambers brothers overdubs we heard originally on an aborted take heard on No Direction Home: the Soundtrack. I've used this track in various forms to get people into Dylan - largely due to Bloomfield's stunning playing.

He was just the best guitar player I ever heard...when it came to bringing in a guitar player for my album I just couldn't think of      anyone better than him...
~Bob Dylan~

Most of the rest of Disc 1 and Disc 2 highlight the true core of Bloomfield's career - when he tried his hands in some bands (Paul Butterfield's Blues Band - what can I say about East/West? It's awesome - and Electric Flag) and having fun in studio and live form with Al Kooper (the super sessions). These mixture of studio and live tracks are the core of what makes Mike Bloomfield a great artist. You hear his variety from straight blues to funkier, horn driven music to his absolutely exquisite live work. Whether it's making "The Weight" work not only as a cove
r, but an instrumental cover (I heard executives initially laughed at releasing an instrumental of such as a single until they actually heard it) or making "Feeling Groovy" seem like more than it should be, I doubt there's another white guitarist from this ere - aside from maybe Johnny Winter and Robbie Robertson - who had the live presence Bloomfield showcased. My favorite live cut? Bloomfield, Kooper and friends strutting through "One Way Out," a take on the old blues motif of a 'back door man' (husband on the way in the front, lover leaving out the back).

The final disc gives us the most out of Bloomfield's less prolific second half, the time when he just wanted to play music - a superstar wasn't the wanted route for the guitarist with such severe insomnia.
We got some more great live tracks (you gotta love the pure blues comedy of "I'm Glad I'm Jewish), some of his work with Janis Joplin (the version of "One Good Man" kills her released studio version) and Muddy Waters and of note, a bit of his return to the stage with Bob Dylan in late 1980. From Dylan's heartfelt speech about Mike and his playing to them storming through the then yet to be studio recorded "Groom's Still Waiting at the Altar," it's a stunning statement on the tragedy of Mike's early death. Finally the DVD documentary isn't what it could be - as I know the filmmaker has a lot more material and was financially unable to much more - at the hour we're given is a nice overview of his career, the musicians who loved him and the kind of person he was. Smart. Funny. Sweet. Kind. The lasting impact of a man being even more important than his musicianship.

This isn't a treasure trove of rarities, and was never supposed to be. It's also not a box set for Electric Flag or Paul Butterfield's Blues Band or Bloomfield/Kooper Super Sessions. This is meant to be a career/life encompassing first dip into those who didn't even know Mike Bloomfield existed. We do have some great rarities mixed with his greatest cuts and live moments, they're just not the centerpiece. Al Kooper has been trying to get this project off the ground for some time, and even though Sony/Legacy finally came TO HIM to get it done, and yet they still underestimate Michael after all these years. Despite not allowing for a budget beyond the 3-Disc/1 DVD (featuring an hour long documentary) incarnation it ended up, this things has been selling like hotcakes, all things considered in today's music market. They pressed 5,000 copies which more or less immediately sold out, and we can hope more will be on the way. No, I don't mean the 2,000 more pressings Sony/Legacy is getting ready to unleash, I mean a further box set delving further into the archives of Michael Bloomfield. He gave us timeless music, he introduced us to Johnny Winter, he jammed with Duane Allman. The least we can do is have more of him. He played from his head to his heart to his hands, and we listen from tape reels to a box set to our own heads to our hearts. It's the f**king blues and God bless him for what he gave.