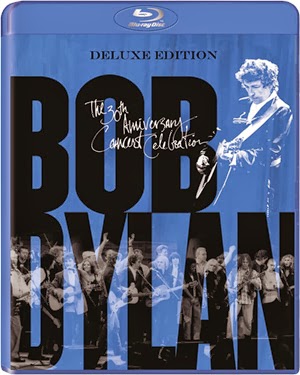 Note: This NTT is brought to you by Bence's request for an article with "Dylan" in the title
Another Tuesday upon us, and while this release IS being put out in a multi-CD package as well, for this New Tune Tuesday we're gonna cover the blu-ray release for the long in the vaults "30th Anniversary concert celebration" of Bob Dylan's career. It may be hard to fathom now, in an era full of tribute concerts to both the dying and the dead, but in 1992 big time events like this were for causes, they were for benefit concerts, not a man. That all changed one night in Madison Square Garden, let's dig in... 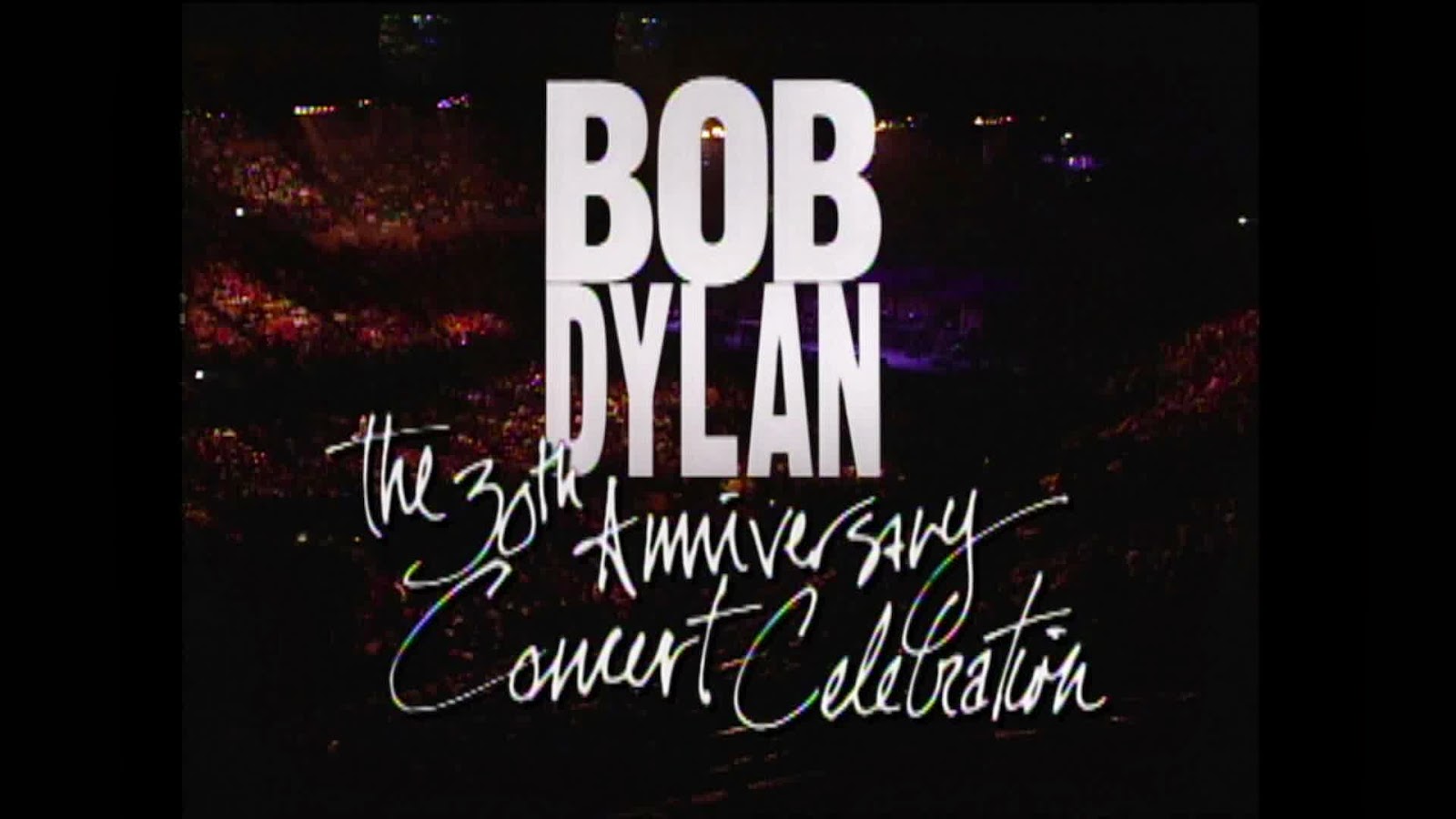 This one's for you Bob...Thanks for having 'BobFest'...
~Neil Young prior to "All Along the Watchtower"~ 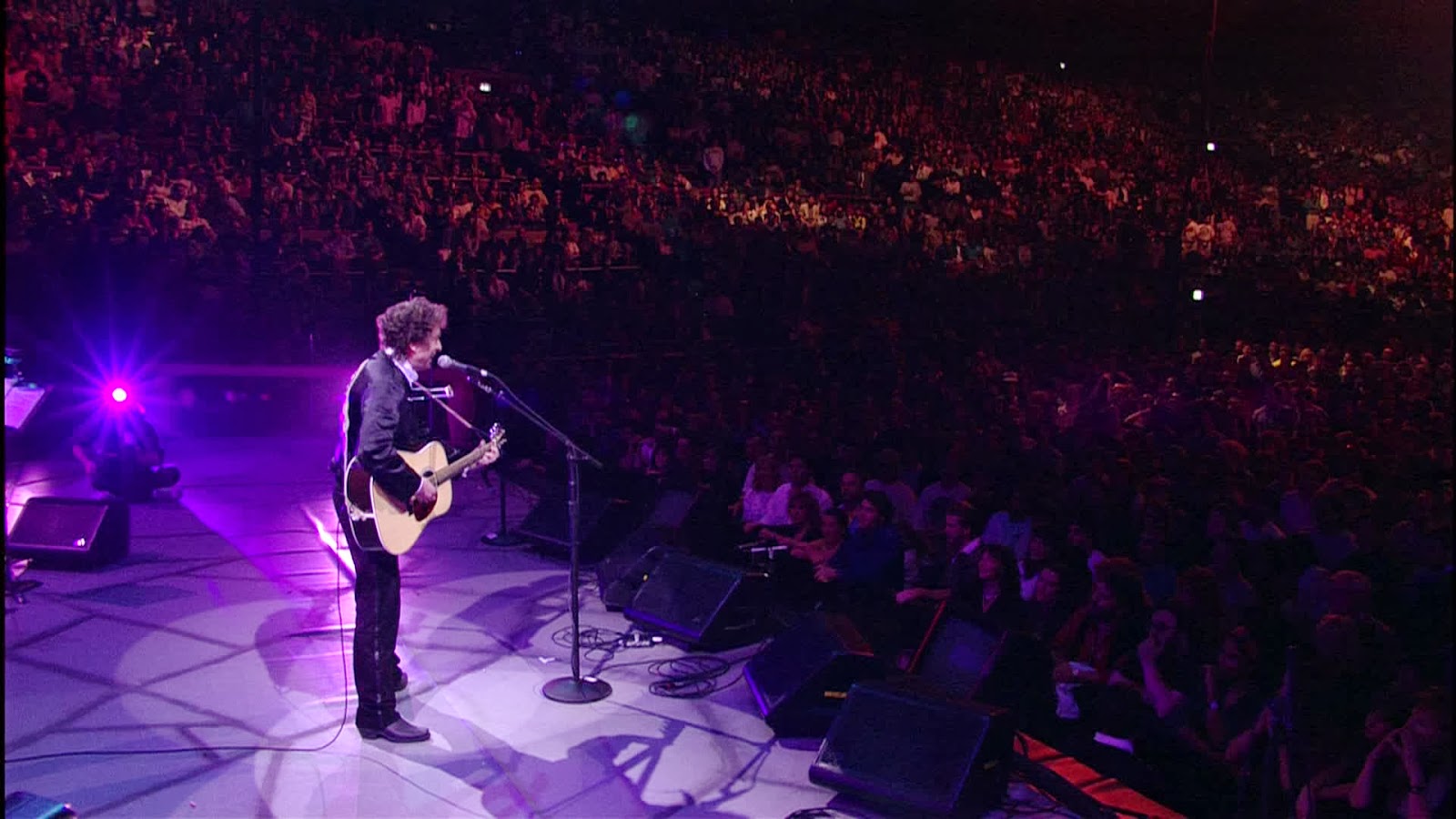 Personal Bias/Quasi-Film Review: Once upon a time, you dressed so fine, you...nevermind. Once upon a time I hunted the world over for a laserdisc player (remember those kids?) for two simple reasons: 1. So I could watch the ORIGINAL versions of the Star Wars films and 2. So I could watch this tribute concert from 1992. Just for the record, I still have both the laserdisc player and all my laserdiscs I ended up purchasing including the Star Wars trilogy, this Dylan tribute and even Don't Look Back. Anyhow despite some big names that don't make it, and some faults by some who do, I really enjoyed the concert, then and now. There's a lot of hit and miss but I wanna say in particular two performances that hit me like a ton of curly Jewish hair: Johnny Winter's slide guitar guided barnstorm of "Highway 61 Revisited" and Richie Havens' sublime "Just Like a Woman." Of all the performances, they stuck with me the most and had me looking at them as more than their Woodstock images I had embedded in my brain. I put them both on my personal "must see live" list and ultimately did catch them both in concert at various times. I got to speak to Richie Havens after his show, one of the sweetest and most genuine guys I've ever met, and discussed his performance here with him. The performers, well known and not as well known, obviously have an affection for Bob, his person and his music, and it shows. With a eclectic group ranging from country legends like Cash and Kristofferson to 60's cronies like The Band and Eric Clapton to underground idols like Lou Reed and (then) current superstars like Pearl Jam showcase just what type of long-lasting impact Dylan had, and still does. It's interesting to note that this 30th anniversary show was basically done to cap off Dylan's career, creatively it seemed he was dry and personally he wasn't much better off, or as George Harrison apparently put it to Columbia "we need to do something for Bob before he's gone." in 1991 he won a Lifetime Grammy Award and Columbia released the first box set in the archival Bootleg Series, all this adds up to "let's cap a career, boys!" Irony strikes as we realize ten years later Dylan was the height of his creative and commercial resurgence and George Harrison was the one no longer here in need a post-mortem tribute. 20-plus years on Dylan has released 7 more studio albums, mostly extremely well received by critics and sales, MTV Unplugged, won an Oscar, released a New York Times bestselling book, had a hugely successful radio program, released numerous mutli-disc titles in the Bootleg Series and been involved or the subject of multiple films: Scorsese's No Direction Home, the anti-biopic I'm Not There, Masked & Anonymous and My Own Love Song. Maybe he'll slow down after the eventual 60th Anniversary Concert Celebration.


Aesthetically Speaking: Much like The Other Side of the Mirror: Bob Dylan at Newport DVD and Blu-Ray releases from prior years (review HERE), this is a really nice overall package. The design has taken a purplish-blu hue as compared to the black and white dominant color aesthetic of the originally 90's CD release, all building around the wonderful show photography of Ken Reagan. The case is not an eco-case and has a nice shot of Dylan and the crowd in the inner case. We also get a nice booklet full of more photos, track listings and liner notes. This one-disc blu-ray release does a nice job of earning it's "deluxe edition" title.

Visually Speaking: There is no possible way a PPV concert from 1992 should look this good, oh wait, what's that? Oh those Japanese, ahead of the game even back then, Doc Brown! While the US Columbia/HBO team shot in then professional tape SD (used on the original broadcast and subsequent VHS and laserdisc releases) the Japanese crew there shot on what we can now call an early form of High-Definition tape cameras. This master has been in storage lockdown over there for two decades and it took big-time Dylan fan lawyer Jerry Schulberg in negotiating a possible release. The AVC MPEG-4 encoded master has the original broadcast opening sequence, and as in that original showing, is 4:3 SD footage, here uprezzed, looking as good as they source will look, but as soon as we get to the actual concert it's like putting on glasses and viewing an HD shot concert from just a few years ago. Most cameras on/near the stage are very crisp, clean and gather really nice colors from the stage lighting. There are a couple camera angles shooting mostly straight on, full stage shots that are a little noisier, that's a little not a lot. It doesn't seem to be uprezzed footage but a source where a little more gain was needed in capturing the original source. The behind the scenes material and extra bonus songs are in SD and once again look as good as they'll ever get, but the behind the scenes material is nice on it's own and the concert is the meat of the package, and it's indeed a nice cut.

The Sound: Being this is a concert, the sound even more than the visual is important, especially on
blu-ray where a big selling point is uncompressed audio tracks. This doesn't disappoint, newly remastered by Anesini, and thank Bob for that, as he's one of the few true masters of mastering in today's market, typically going for quality over the trend of the loudness war. This uncompressed 2.0 Stereo mix sounds fantastic, and whether it's Booker T and the MGs original house band backings, audio interactions or re-dubs done in post (yes, Bob, I'm looking at you on your verse in "My Back Pages") it all sounds crisp with nice depth and wonderfully mixed.

Bonus Goodies: Though in SD, there are some nice bonus additions to the blu-ray edition. We have three cut-out live performances (which were on my original laserdisc strangely), even though there were others that could have made it (Harrison's "If Not For You," Thorougood's "Wanted Man" and Dylan's "Song to Wood") it's nice any were included considering the show is already around 3 hours long. We also have 40 odd minutes of behind the scenes interactions of the week-long rehearsals and some interviews with various performers. It's a nice batch of goodies, especially since like previously stated, the main program itself is close to three hours in length...
Behind the Scenes Featurette
"Leopard Skin Pillbox Hat" - John Mellencamp
"Boots of Spanish Leather" - Nancy Griffith and Carolyn Hester
"Gotta Serve Somebody" - Booker T and the MGs

One last Hawk, er, thought: It's incredibly sad to realize how many great names featured on this show that aren't here anymore. A classy move by the Dylan camp to do a little dedication to them on the back of the booklet.

More Blu-Ray Screen Grabs:
Taken Direct from Blu-Ray Disc
Blogger Re-Sizes images to well below 1920x1080
All images under fair use for Discussion, Critique and Review 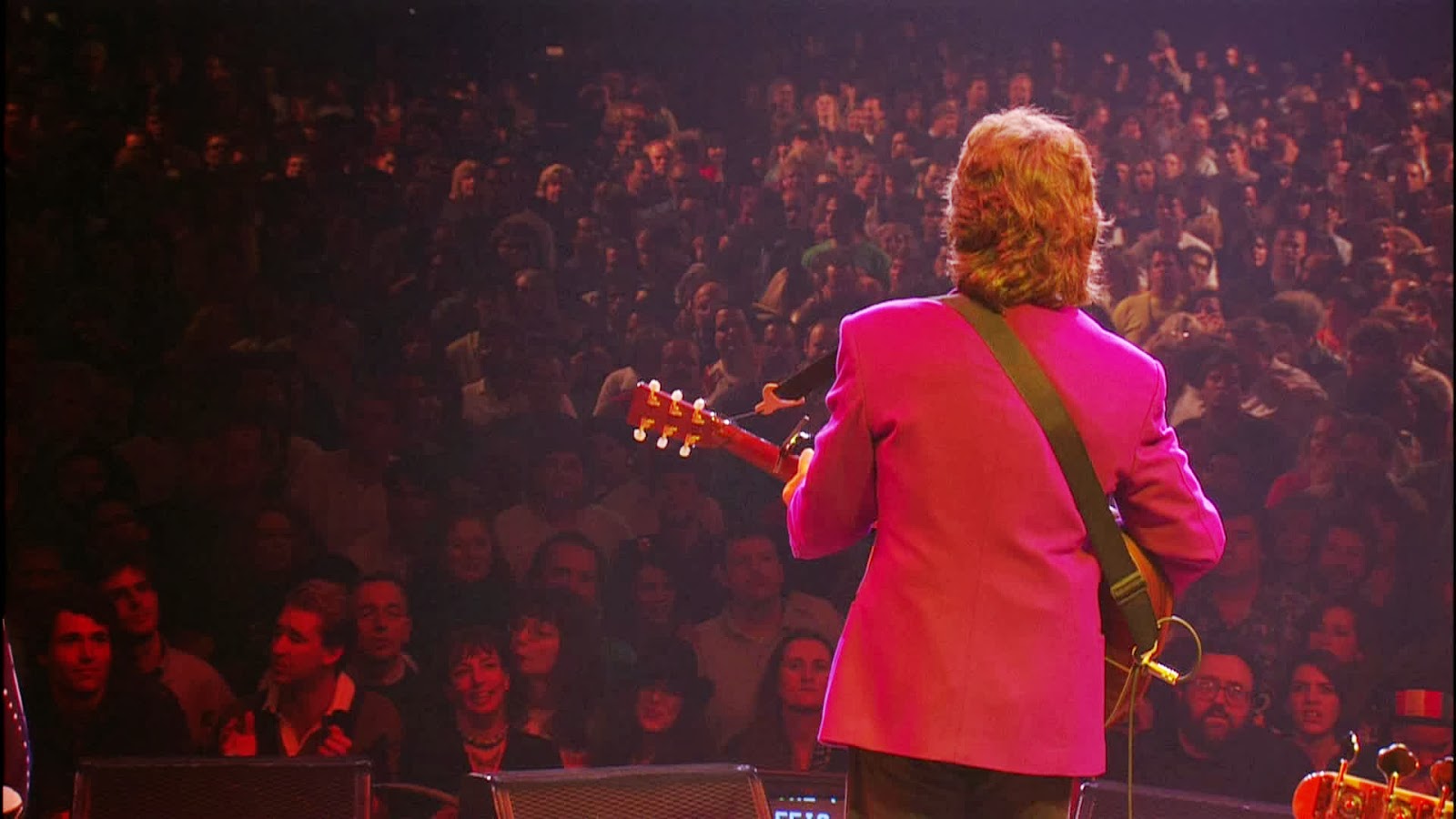 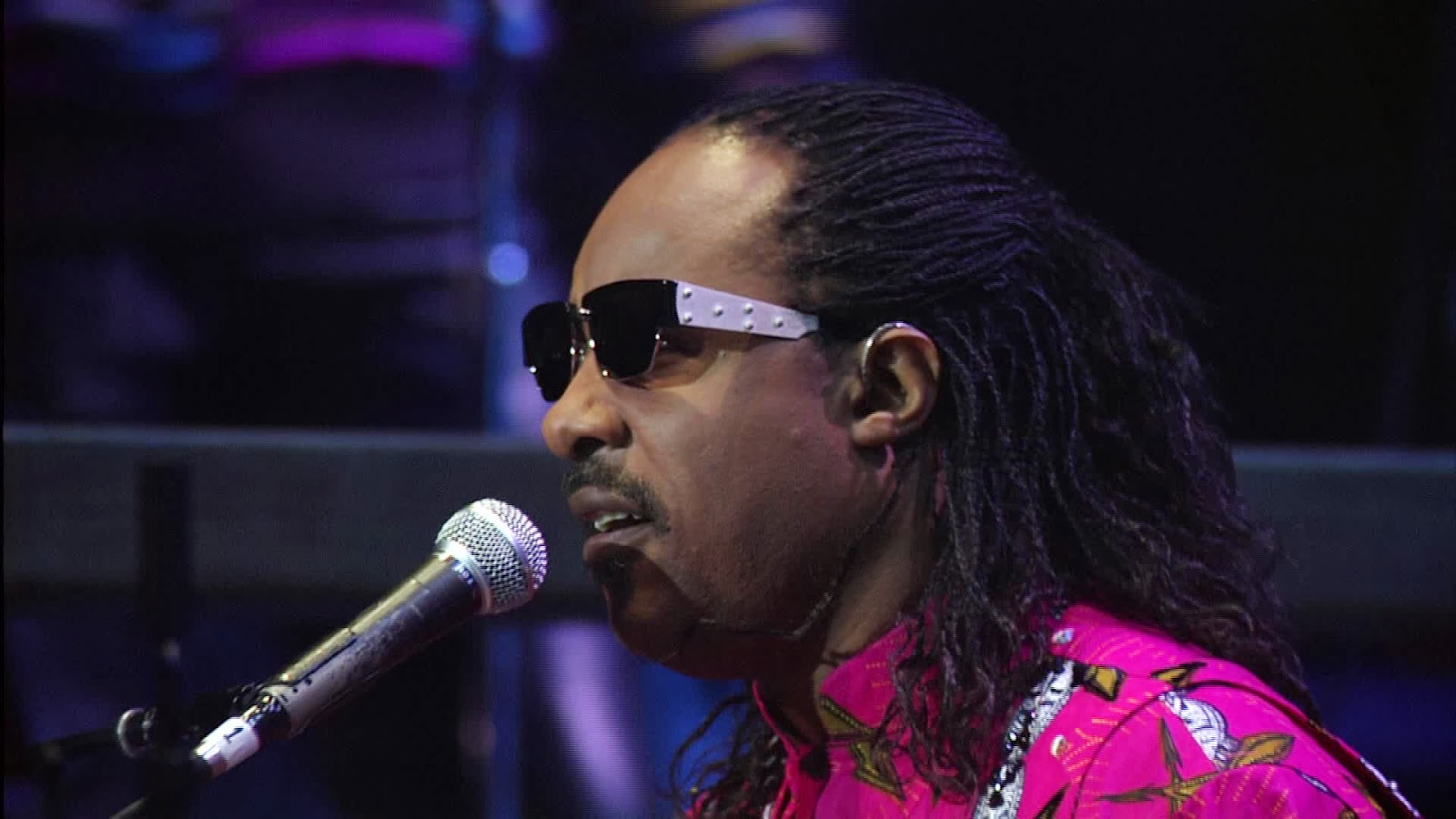 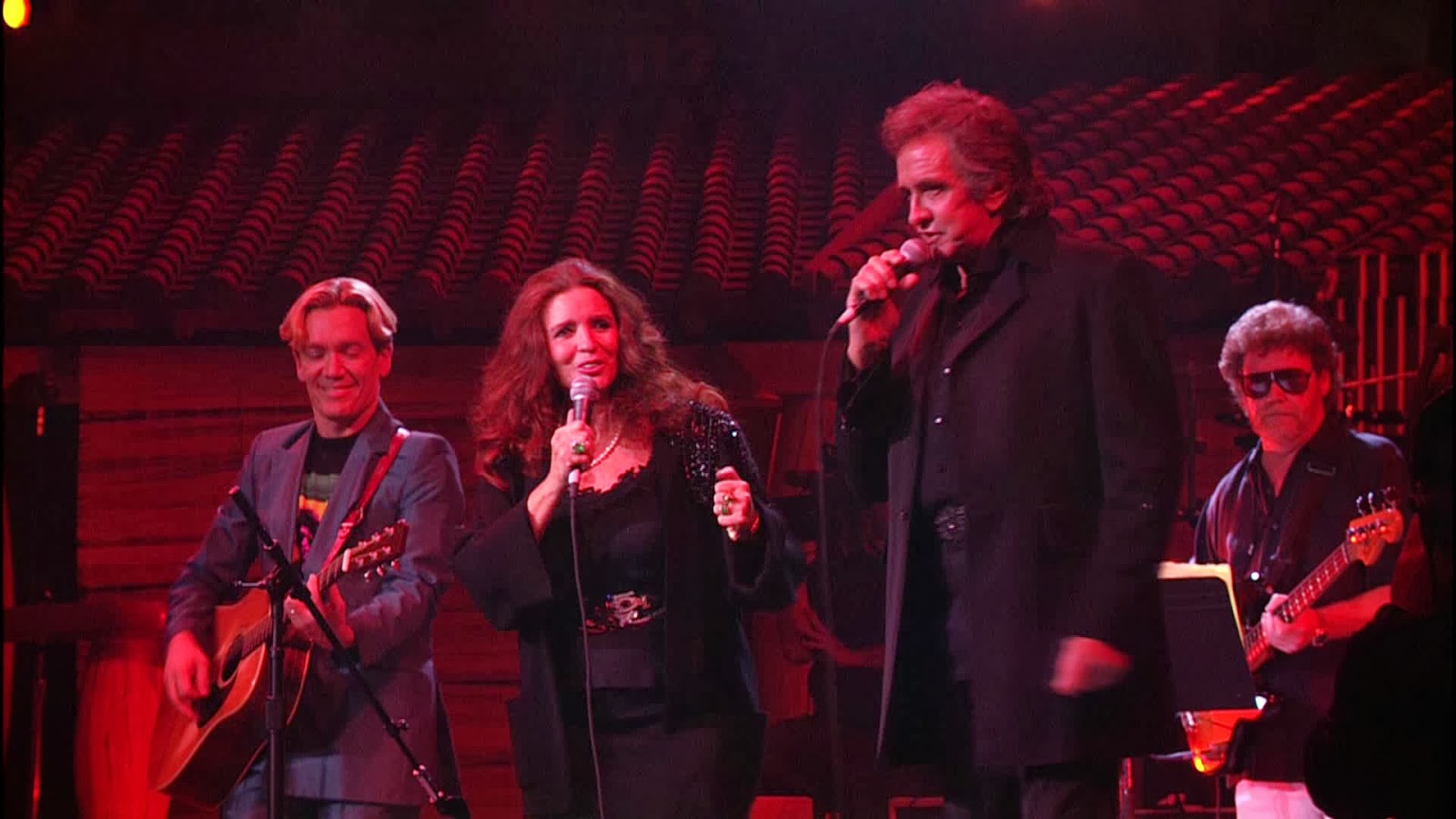 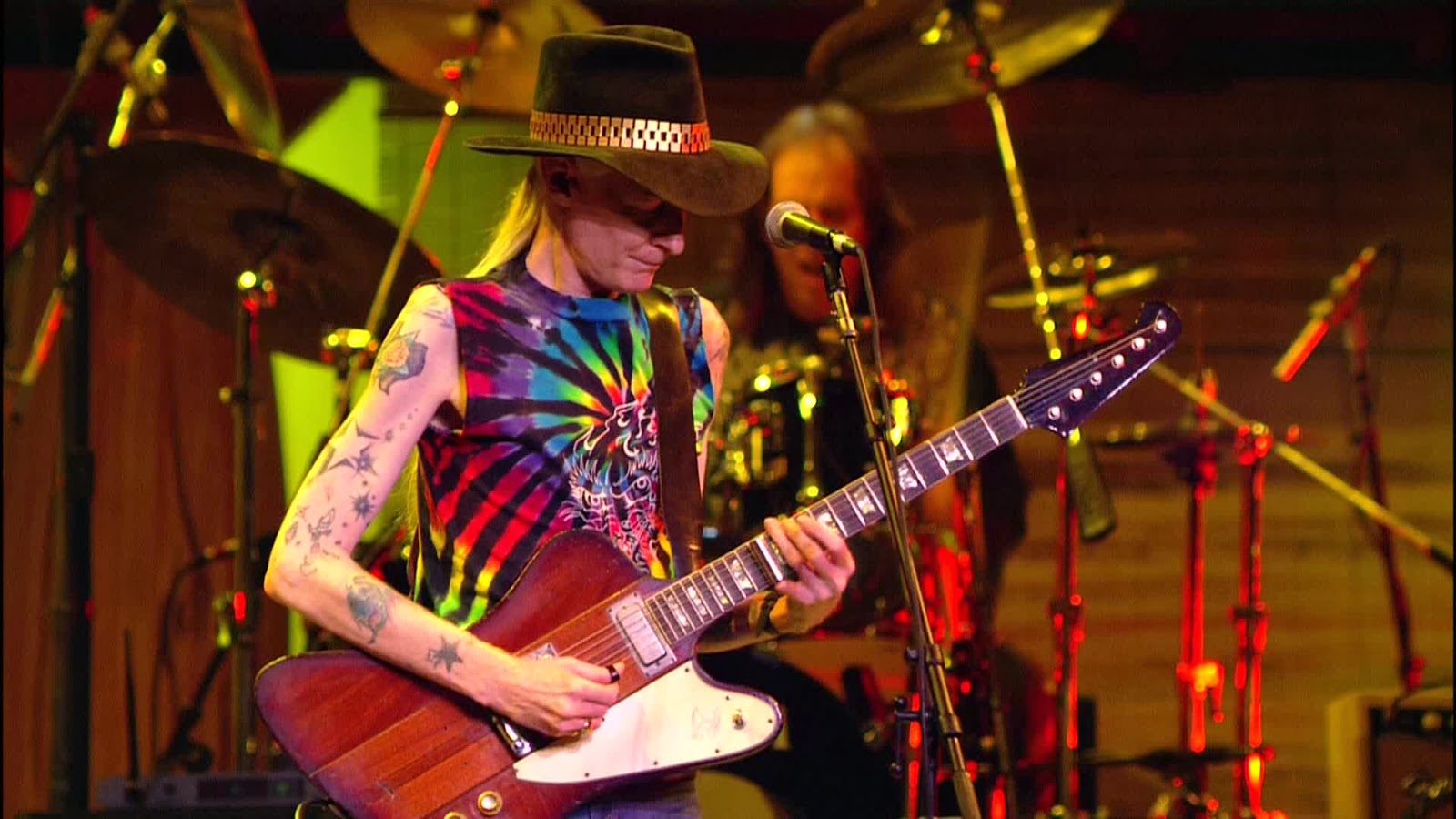 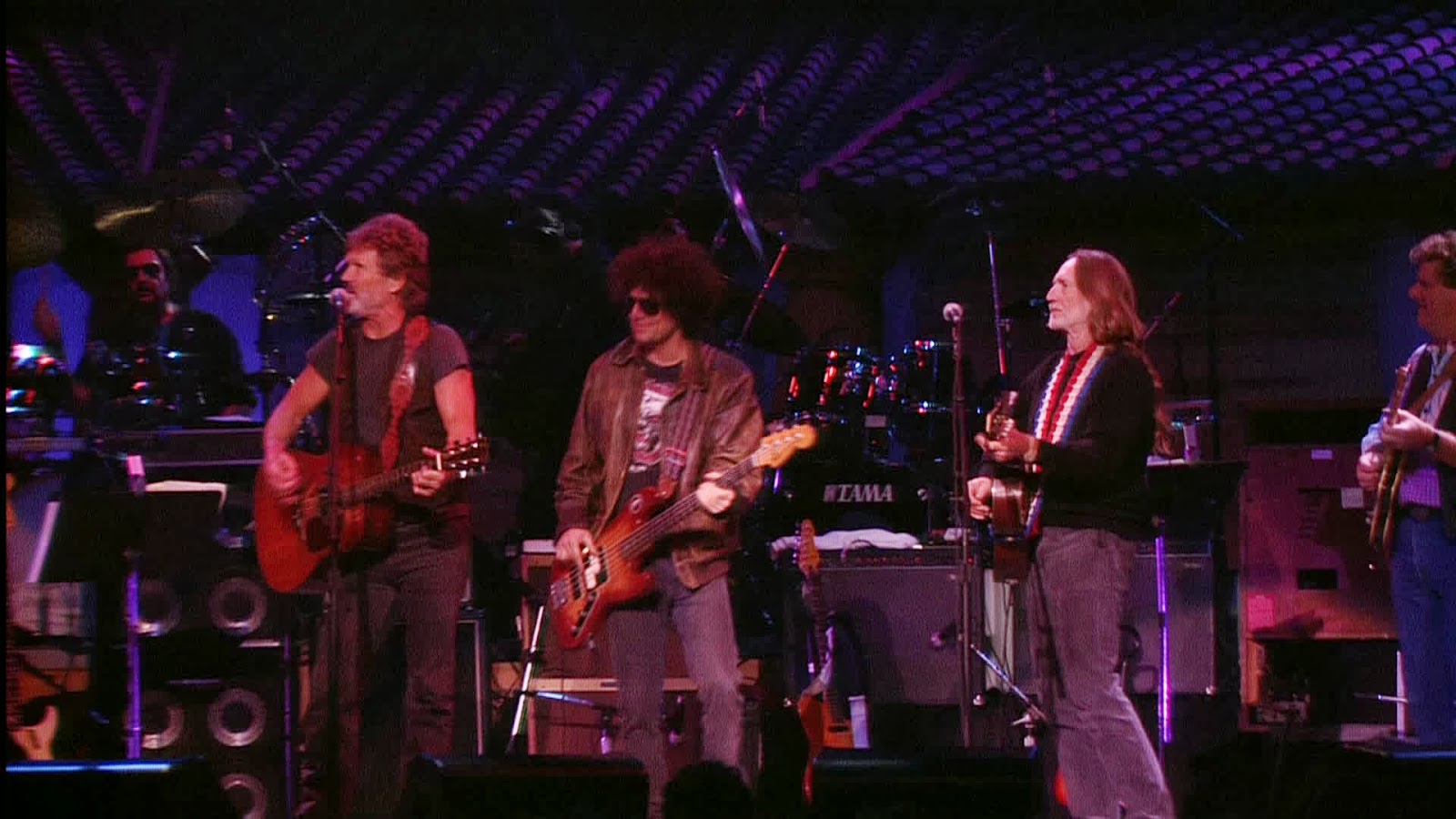 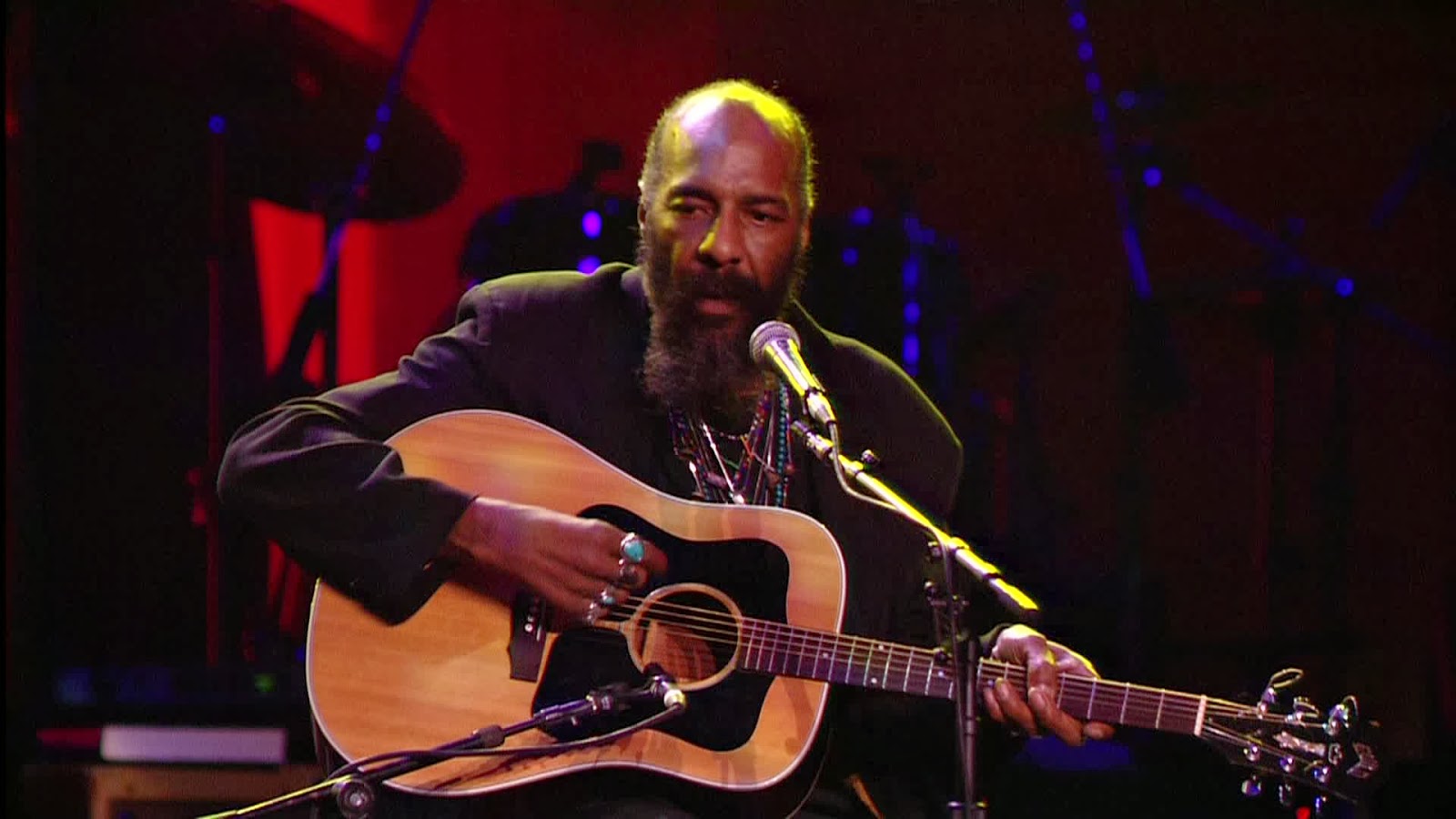 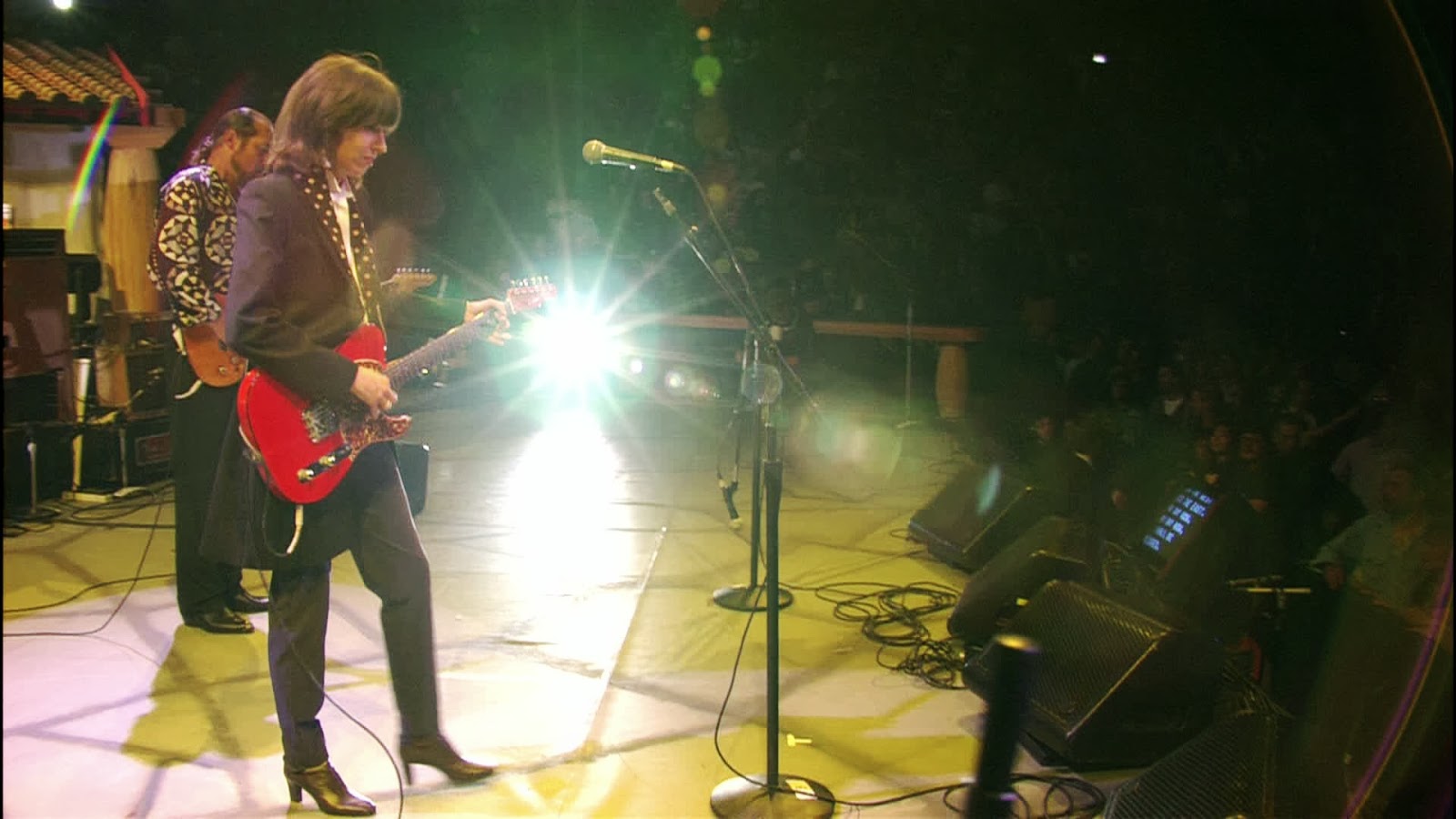 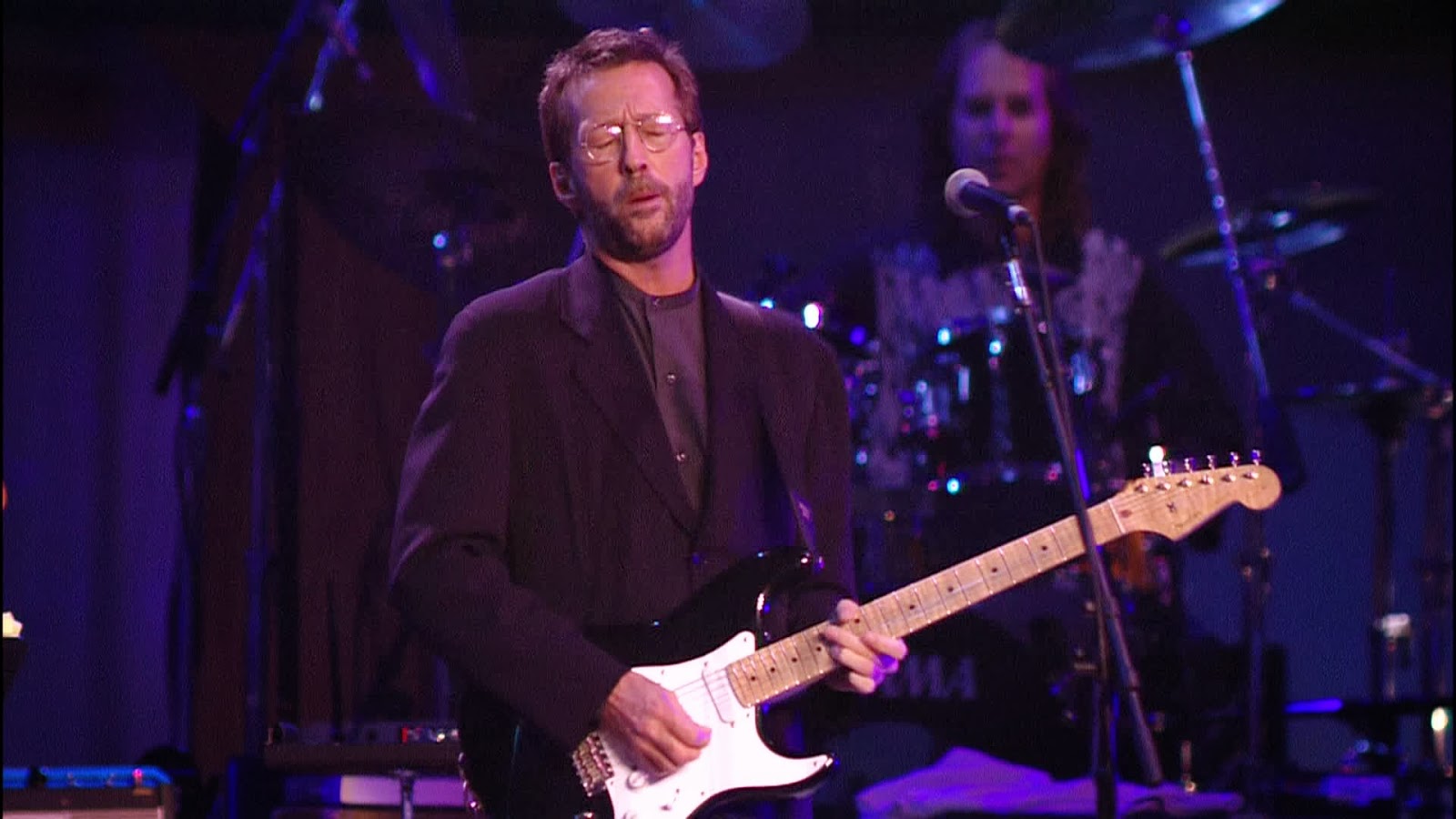 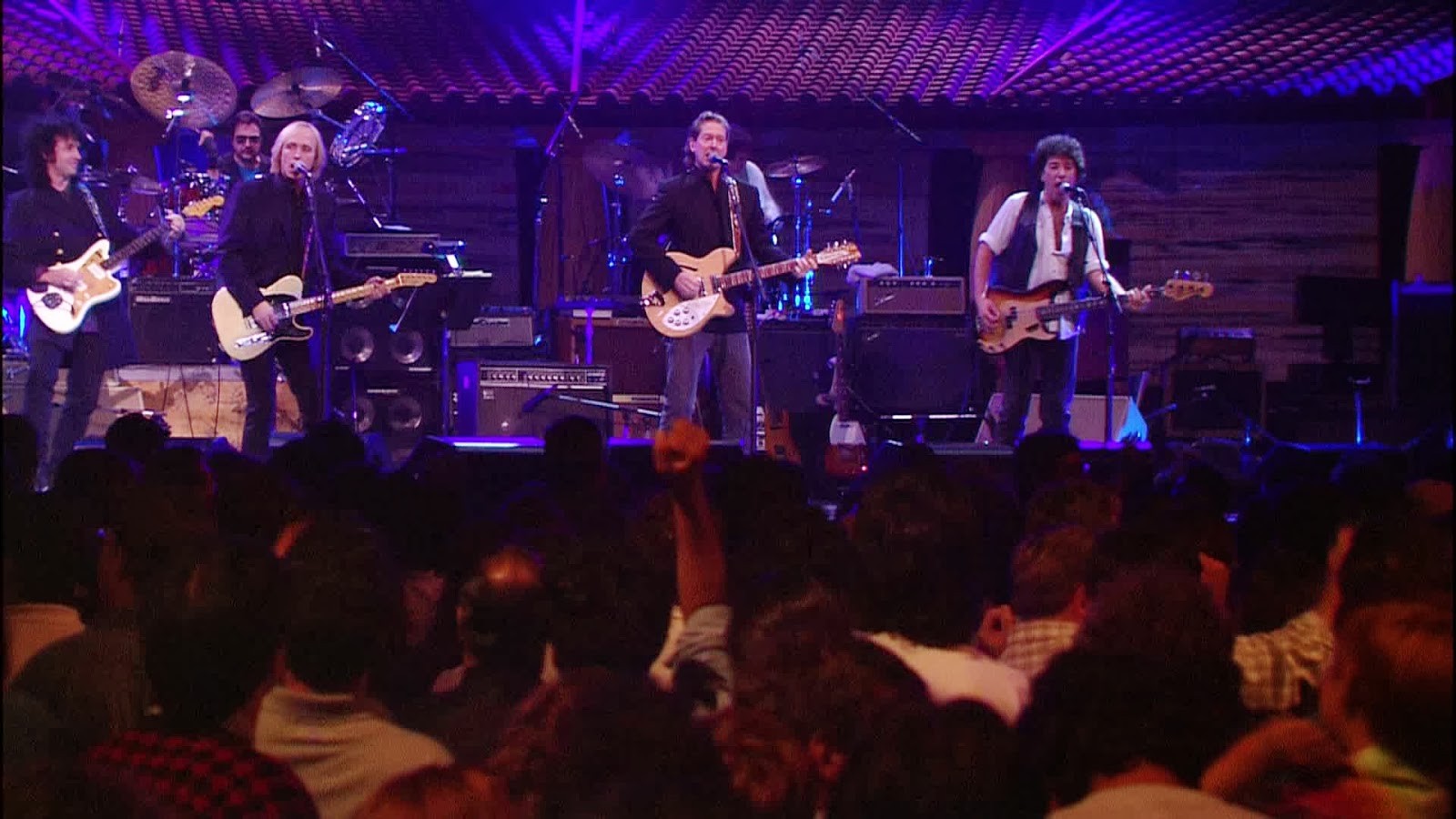 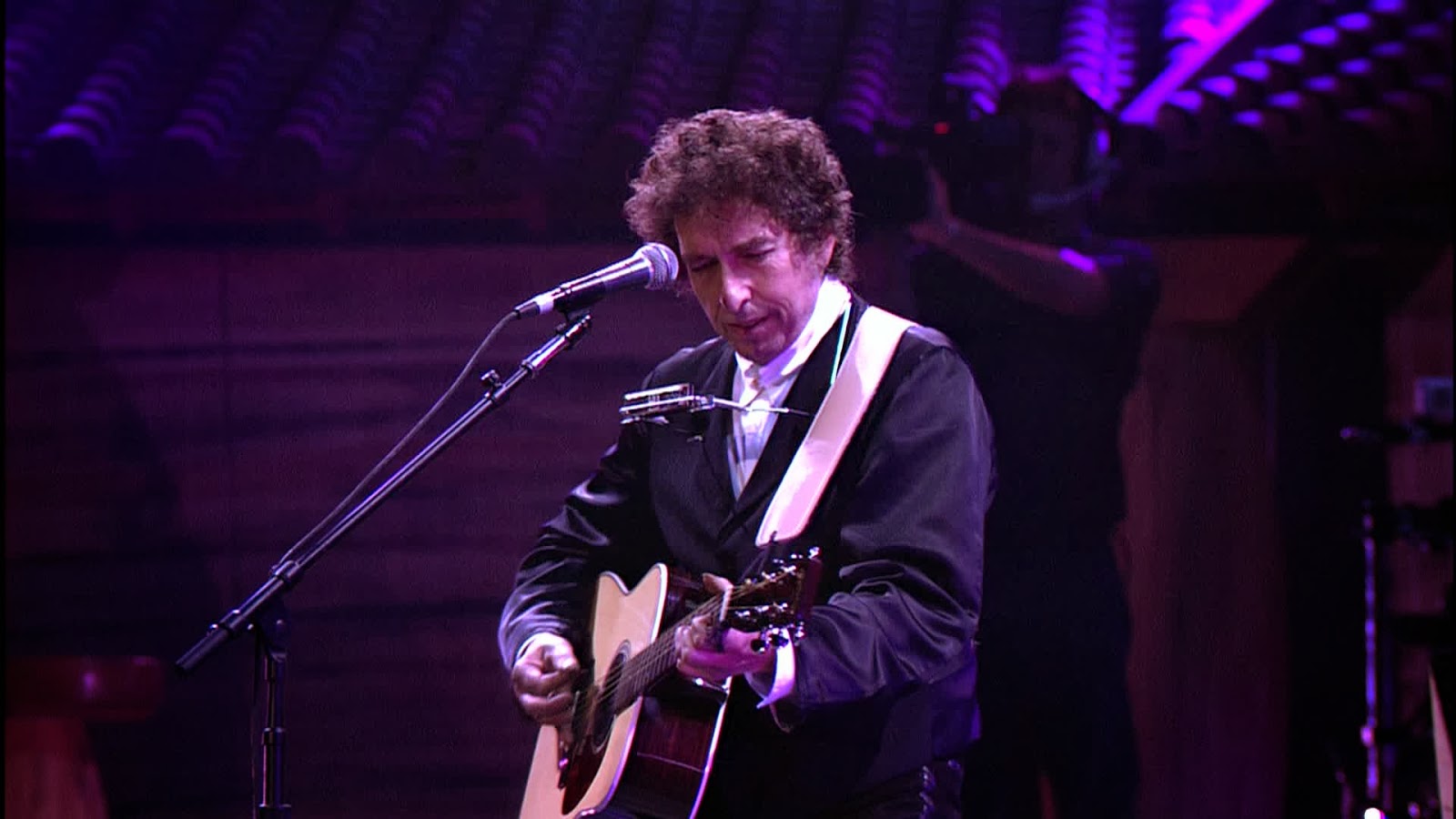 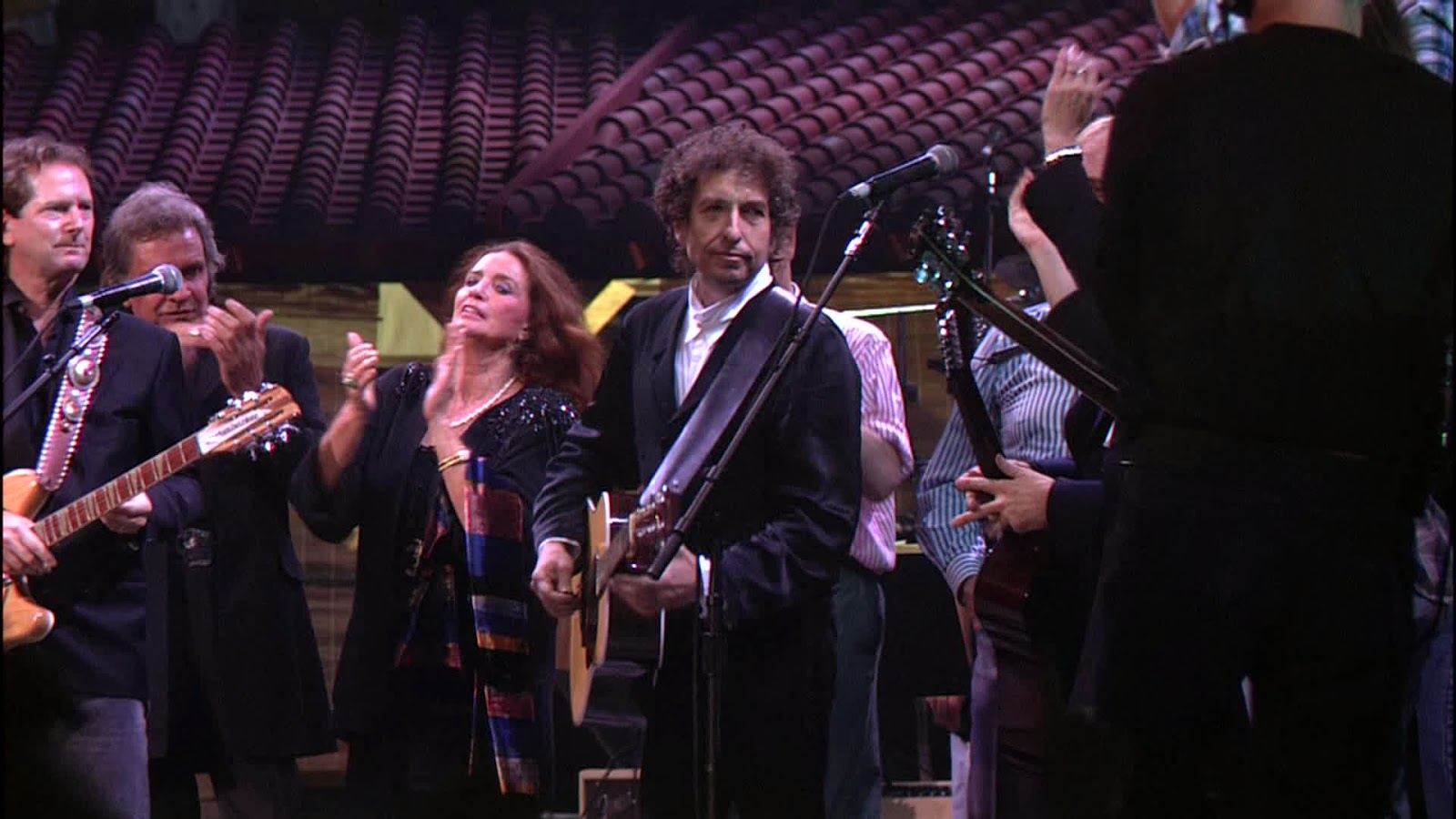