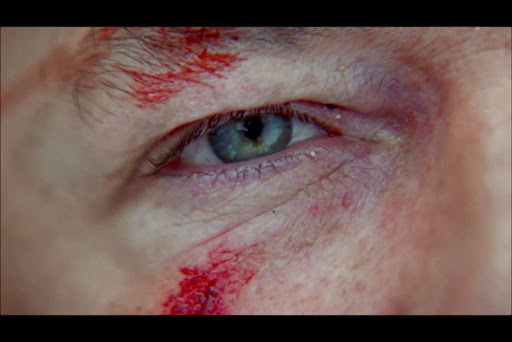 A familiar shot as we open up onto Locke's eye as the first shot if this episode. Once again we are taken back to the first few moments just after the crash, this time from Locke's point of view. So why is this important? Well for a few reasons, first off it sets the tone for a major theme of the show which is one of redemption and revelation. Throughout the series our characters' eyes are opened, figuratively, to possibilities and truths either about the world or themselves. This shot of a single eye opening actually starts quite a few episodes even as far as Desmond in the beginning of season 2. This is why I love this project, I never noticed just how frequent this shot was used.

The other reason I chose this shot? Well it sets up a duality between Jack and Locke. The show itself is obsessed with duality, good and evil and all sorts of gray in between. This is one theme I'll be bringing up a lot, but we all know there is no greater dichotomy than Jack and Locke. Whether it's science vs faith, or the final battle between good and evil, Jack and Locke represent two ways of life and it's fair to say one would never exist without the other.

One last thought - hard not to choose him wiggling his toes