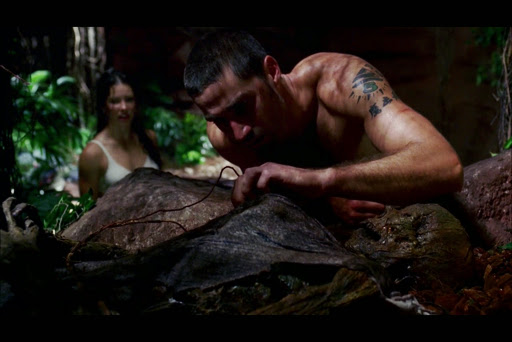 Rewatching the series I have to say Sun and Jin have by far the most emotional flashbacks. Each one more heartbreaking than the last. Just one of the many joys of taking the journey back go the island. But enough of that, today I want to look at one of the biggest mysteries of the show, that of Adam and Eve, the two skeletons Jack, Kate and Locke find in the cave. Now right up front I won't say who these skeletons belong too. Cause if you don't know, then just watch the show because this is one of the few mysteries they give you a concrete answer to.

What I loved most about this is how this is one of the many mysteries that came up in the first season that laid out the groundwork for many further seasons to build upon. Now once the survivors find the skeletons they also find a bag with one white stone and one black stone. We already have seen black and white emerge as a constant motif, so even now are we led to believe that these two bodies are representative of good and evil? Also Jack states that the bodies are 40-50 years old...as the series goes on and we learn the nature of the island are we too believe that these may be actually be survivors of 815 and thanks to some good old time travel have arrived back here in the "present." By far my favorite theory, and one that excited me with it's possibilities. So I ask you? Were you happy getting the answer? Or would have been happier having the mystery live in your head and have it be whatever you wanted it to be? Fine it's the smoke monster...you're welcome.

One last thought - and his mom