Russia not a fan of Ukraine's new boyfriend, shows her he loves her by stealing her stuff: the Crimea. 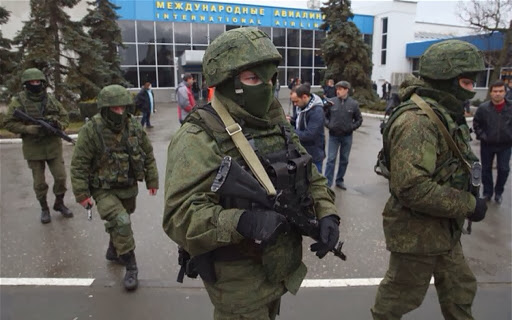 Have you ever had a breakup with a girl that you knew that you never get over? Well, Russia does. Back in 1991, the Ukraine decided it had enough of the U.S.S.R's philandering ways and moved back home with its mother. From time to time, Russia would show up reeking of cheap vodka blasting Peter Gabriel from a poorly constructed boom box with a blown out speaker. The police would be called, Russia would bolt and later wake up in the gutter outside of the kremlin. Other times, Russia would simply meddle in the affairs of its ex by leaving flaming dog shit on Ukraine's doorstep or being involved in the poisoning of one of her candidates for president seven years ago.

All of that could be considered theater for the next step of their abusive relationship as Russia declared war on the one of many that got away. Over the course of February, Vladimir Putin and the government were gather political capital and gold medals at the Sochi Winter Olympics. While most were uninterested at the exploits of ice dancers, hippies on snowboards or gunman on skis, the Russian government was devising a way to spend that beautiful political capital and we now have an idea how they plan on doing it. The Crimea, a peninsula in the Ukraine is now under the control of the Russian Federation and Vladimir Putin has asked for the right to use the might of the Russian army to invade the Ukraine proper. He was granted it.

The ultimate goal of this exercise is the restoration of Viktor Yanukovych, the former Ukrainian President with pro-Russian ties who was ousted from power last week or that it what one is led to believe. Is this merely going to be merely a bid to give the Ukraine a black eye and put Yanukovych back in power or will Russian press further into the Ukraine? That is the question and the answer remains to be seen.