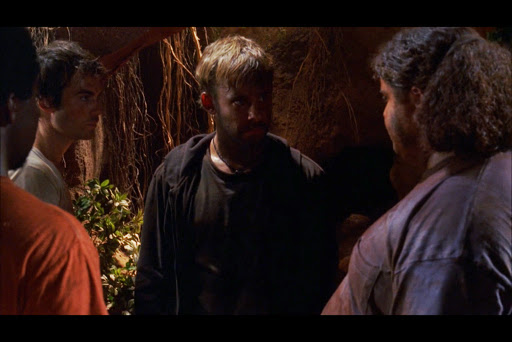 There's a million theories about what Lost was really about. Whatever your theory may be, it is undeniable that Redemption is one of the core themes of the show. Everyone has faults and transgressions, but the island gives them a chance to overcome those and make new choices in life. Some fare better than others and that's the point. Not everyone is able to change, some just don't want to. Even in these first few episodes we see the seeds being down as to who these people were off the island, and the first steps towards attempting a change.

This shot shows a turning point for Charlie. Faced with the pains of withdrawal, Charlie is struggling to find a meaning for his life, to prove to people that he is worth something. Here he literally shows that he is the perfect man for the job. Being of small stature he volunteers to climb into the cave to save Jack. The whole scene you can see the hesitation in everyone's face, unsure if Charlie is reliable enough. It's an uplifting moment seeing Charlie achieve something and prove just how valuable he is. He of course would go on to make similar decisions in future episodes including one of my favorite scenes in the whole series. Charlie here seeks redemption for his sins, but so does everyone, it's such a universal theme and Lost explores it in such a unique and interesting way through the lens of this insane puzzle of a story. I'm sure we'll revisit this again.