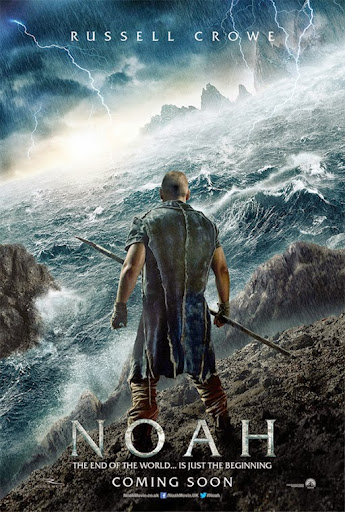 Wrestling with this one for awhile. I keep coming back the idea that this is a flawed masterpiece. The problem is I'm not a huge fan of passive aggressive buzzwords that don't require me to make a judgement call. Now that isn't to say that all films should lie in like it or not...that's just impossible, also one of the reasons I don't use a ratings system. Let's start from the beginning. 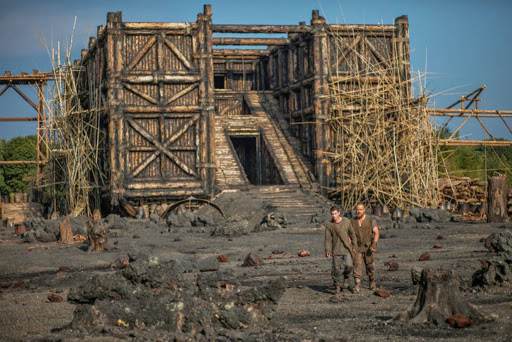 Darren Aronofsky is my favorite working director. Each of his films speak to me on such a higher level, he taps into something deep in my soul that no other director is able to do. And I think that's often due to his films largely about passions of life leading to obsession and the darkness that can come from that. The Wrestler even ends on this beautiful note of passion being more important than life. A belief I'm inclined to agree with. I think my struggle with this film is that Aronofsky flies right past passion...and Noah starts off his journey obsessed. Not only that he feels bound. He doesn't want to carry out these tasks but his faith is so strong he's willing to do anything to make sure he accomplishes his goal. It's a different take that I don't necessarily agree with. That's what's clouding my thoughts on this film. 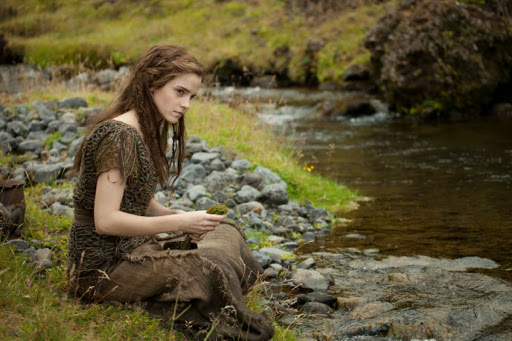 Let's start with my concerns. The fact that the movie is thematically different from his other films isn't a bad thing, it just means that I didn't have the same visceral reaction I've had to his other work. But that doesn't mean that my intellectual reaction was any less. Now I do have some concerns that I can't ignore so let's deal with those first. First off the acting was incredibly inconsistent. Russel Crowe is an amazing Noah, equal parts caring, tormented, ruthless, and defeated, but the same can't be said for the rest of his family. His youngest and oldest son have little to do, other than push the plot along when necessary. Neither of them bring anything significant to the table. Emma Watson who is the adopted daughter has some great scenes, but when she's not crying hysterically you don't feel the gravity that is necessary given what her character represents. The small moments really count and she is just clearly out of her depth. Logan Lerman fairs better, his middle son has a decent conflict and he's able to convey it believably. Nothing too amazing, but he's never flat. Winstone as the villain is great, unfortunately, his character is mostly unnecessary. 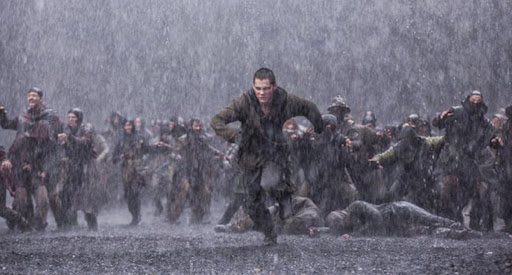 Which leads me to the next issue I had, the script itself had a handful of moments or scenes that seemed like afterthoughts or just not vital at all to the plot. One being the villain, Noah is his own villain and there was no need for someone so clearly EVIL as Tubal Cain. More egregious is his time on the ark which begins to border on ludicrous. Now, I have a theory later which makes up for this, but still it felt like sloppy writing. Another scene is the exchange between Percy Jackson and a young lady in a like of dead bodies. I was a fan of Lermans desperation, but again the idea that he was so desperate that he'd be willing to risk his life for some girl he met in a death pit doesn't make sense to me. 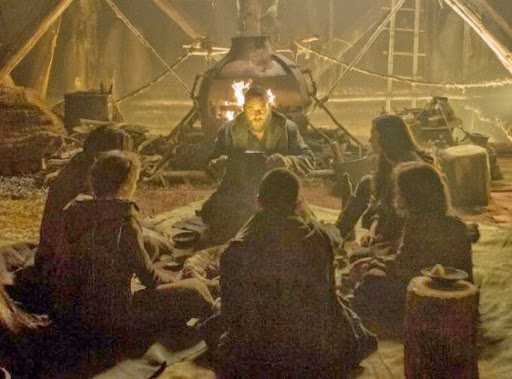 Alright so the good? Well first off if you've been waiting to see Aronofsky's take on a comic book film, this is it. He treats the source material less like a religious text and more of a mythological story full of heroes and monsters. There are morals and lessons to be learned like any good fable, but this has little interest in faith. The film goes far out of it's way to never use the word god. There is an omnipresent creator, but couple that fact with Aronofsky's mash up of creation as evolution and we see that this film isn't trying to make a statement on one or the other. This is a story about humanity and the capabilities we have within ourselves. In this world mankind has succumbed to all their desires and the world we see is a relic of a paradise ravaged by the industrialization of society. Noah is tasked with cleansing the world not because he is perfect but because he has the capabilities for the whole range of the human experience, along with integrity. He feels bound by his own faith, not wanting to complete his task but knowing it is the only way for humanity to continue. He is both the ultimate super hero and villain. Responsible for millions of deaths, but also the one who made the tough decision so that we can endure.

All these heady concepts are given to us with a brilliant visual eye thanks to the genius of Libatique and Aronofsky. Clever stylistic choices help to how Noah as the Everyman, like showing him in silhouette early on in the film and then later showing mans evolution as a killing machine in the same silhouette. I mentioned the industrialization of nature by man, as we follow our family across the dystopic plains we see remnants of a what must've been a grand society. We see copper plumbing and fallen structures, all given a sense that this story is from another world. Even the sky which is always filled with stars never resembles OUR sky. Again, to Aronofsky this is just a story, an awesome exciting story about the potential of man for good and evil, but still a story. 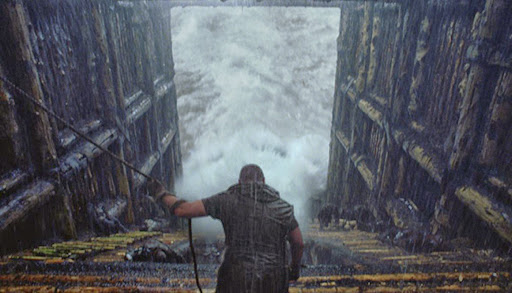 Let's talk about the visual representation of heroes for a minute. Noah is easily the protagonist, he is constantly framed like a hero. We see him in doorways centered with a weapon in hand as chaos ensues in front of him. He is often framed on a higher elevation than his opponents giving him a sense of visual superiority. Then we get these amazing long shots where Crowe is leading the family along these gorgeous dystopic plains. It's a dangerous landscape but with Crowe constantly in the front we see that his family will follow him to the ends of the earth. As Crowe begins his descent into what some might call madness the style changes. He is no longer revered by the camera. Rather he inhabits the corners of the screen and he moves with a smoothness almost slithering through the boat as his family begins to cower in fear. Perhaps most telling is that for much of the climax of the scene, Crowe has blood over half of his face. A beautifully done if a bit on the nose visual metaphor for the duality of man. Here we see Noah with the blood of millions on his soul, yet he is the one who will save mankind. 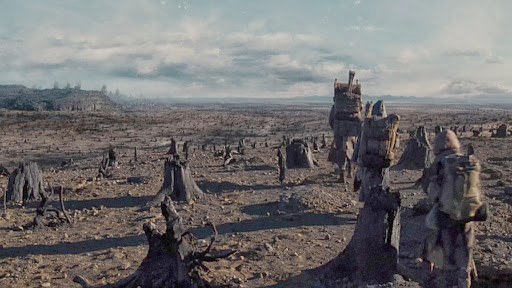 This is barely scratching the surface. I haven't even mentioned his amazing battle scenes, and flame swords, and the story of Angels being turned to stone. I've been thinking about this film since I've seen it a few days ago. I mentioned before that I don't feel like Aronofsky cares much about making a film about faith, but there's definitely an argument to made that it is. This is a thought provoking film bogged down by some confusing choices and limited acting ability. Aronofsky gives us some of the most amazing visuals of his career, but at the same time this film is such a passion project for him it has some glaring inconsistencies. It is a film that demands to be discussed, it bores into you head as you contemplate the place rock angels have in our world or just how powerful love can be. I could write pages and pages upon this film and still never fully wrap my head around it. Perhaps then maybe that's the highest praise I can give it. It may not be the film I was looking for but it is undeniably the work of a genius and one that I hope gets better with each viewing. 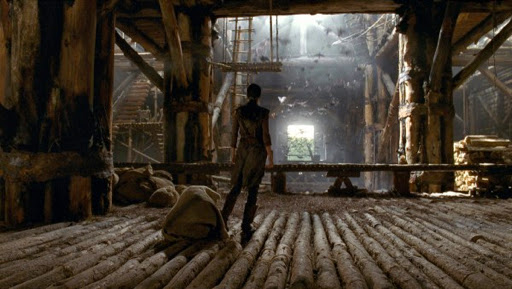 One last thought - The design on the animals was deliberately made to look slightly unreal than their real life counter parts. An early dog is an amazing beautiful example of this.