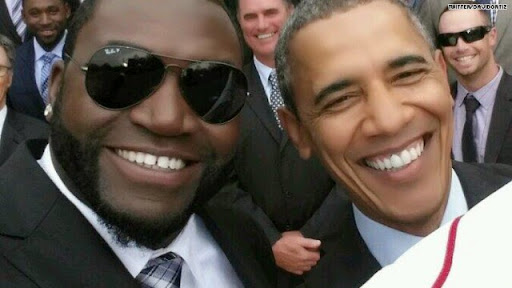 Forget NSA wiretapping, Benghazi or the excessive use of drones, the scandal that will forever tarnish the administration of Barack Obama is the banishment of "selfies" at the White House. Thanks, David Ortiz for ruining it for the rest of us. What am I going to do when I meet the President, shake his hand? That will hard to do with a pre-recorded broadcast on the television. Let's face it meeting graduate students and average schmos is not on the list of priorities for the president nor should it be. He is a busy man with a calendar chock full of important tasks essential to making our country function in global context such as banning selfies.

Before I tap into the ludicrous nature of the White House reducing itself to acknowledge such things, let's take a moment from our sponsors to discuss the stupidity of the word, "selfie." I enjoy slang as much as the next bloke but I cannot stand the overuse of meaningless words. Is having to say self-portrait too time consuming in the go-go world you live in? I hope that extra .00000000000001 seconds you earned back was worth it. After all, every time you use the word "selfie," a literary English master rolls in his grave. Thank you old man river for that extended diatribe. Good reporting as always, pithy banter, pithy banter, you forgot to mention that a selfie only includes the one person taking the picture. Semantics are a bitch.

Intellectual high horsing aside, the issue is that Big Papi has a deal with Samsung and thus, this was a clear violation of the White House's love of electronics from 2007 (i.e. Blackberries) and thus, such shenanigans had to be squashed. I for one am glad that the White House defined its stance on "selfies," lord knows that they do not have anything better to do such as writing better speeches for Obama about pre-emptive war, doing anything about Ukraine or literally, the 9,000 daily tasks that need to be done. Glad to know that this was important for a staffer to discuss on Face The Nation. I suppose Obama was aiming for posterity on this one and did not want his legacy defined by tolerating self-portraits of the chief executive and well-known visitors to proliferate in the ether. Let it never be said that our president is a not man of principles by ending this scourge of picture taking with cell phones.


... Let's be honest, he did it because he was pissed that he looked goofy in the picture. I would be to.

Posted by Manfred "Manny" Funkowitz at 6:34 AM