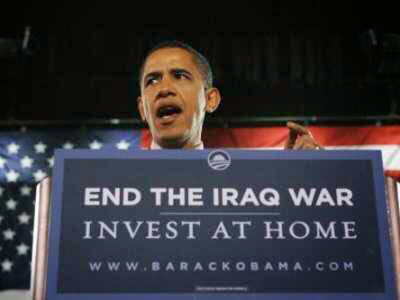 Editor's note: *This is the latest release in the Manfred Funkowitz catch up theater.

When the outgoing President leaves the office of chief executive, it is customary for the predecessor to leave a letter for their successor. Typically, these contain words of wisdom or first hand accounts to be the Chief Executive of the United States. In the case of Obama, I imagine that he received a college ruled notebook with the following note:

When you ever hit a snag, follow this. It helped me immensely when I was in office.
Love, Dick

In case you are wondering, George W's handwritten crayon note was in the Oval Office's wastebasket and touched on such hot button topics as unicorns, ickyness of the color pink and how extra sour sour patch kids candies are.

It seems that President Obama is clinging close to that notebook. First, the Patriot Act, FISA, drone attacks, bailouts and now, he even is discussing the Iraq War in glowing terms. Do not get me wrong, what Russia is doing in the Ukraine is unconscionable but saying that Iraq is any different than that is well... It is kind of dumb, both politically and logically. For those who do not recall, Obama was not only against the war and based many campaigns on said position erased this stance in one fell swoop.

Congratulations, your tepid response internationally to such events as Syria and now, the Ukraine has broken the proverbial camel's back. I can deal with the lack of flash when it comes to American foreign policy but this is a little too much to take. Consider this the loss of my respect. Good day, sir.

Posted by Manfred "Manny" Funkowitz at 8:46 AM